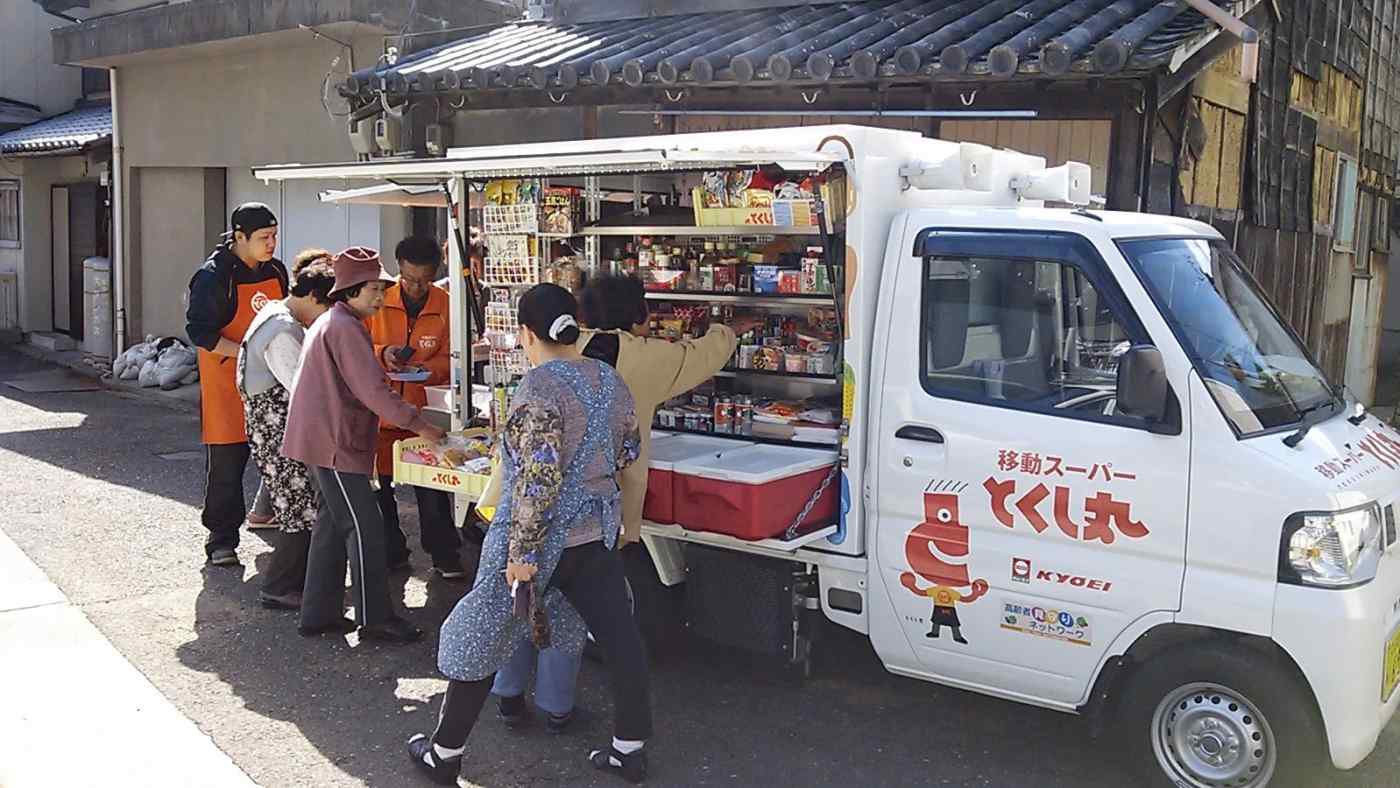 And a small company in the city of Tokushima that has made this realization is expanding at an accelerating pace.

Tokushimaru runs a chain of "supermarkets," with each store carrying 400 kinds of products and about 1,500 total items, all aboard a truck.

In March, the company expects to expand into Okinawa Prefecture, which will put it in all 47 of Japan's prefectures.

The company began selling foodstuffs and daily necessities from a small truck in February 2012. It took four years to expand to 100 trucks, which drive up to customers' doorsteps, but the pace of growth has since risen to 100 trucks per year.

The 400th truck hit the road in May. In December, the Tokushimaru "chain" counted about 470 trucks. In March it expects to have a fleet of more than 500.

Demand for mobile supermarkets is growing along with the number of elderly Japanese in regional towns and small cities who find it difficult to drive. "Potential demand is still strong across Japan," said Tatsuya Sumitomo, president of Tokushimaru. "If the convenience of our service is understood by local people, we can further increase the number of trucks."

The company is expanding via partnerships. Pantry Keisuke, a food supermarket in the town of Tsuno, Miyazaki Prefecture, in October opened a supermarket on wheels under a tie-up agreement with Tokushimaru. And A Coop Tohoku, based in Morioka, Iwate Prefecture, on Monday began operating a Tokushimaru truck in Miyagi Prefecture.

Tokushimaru has so far tied up with 120 supermarket companies that have a total of 1,700 stores. The company can reach 1,000 trucks by utilizing its existing partnerships, according to Sumitomo. But Tokushimaru will seek additional supermarket tie-ups to attain the target.

To help its existing partners increase the number of their trucks, Tokushimaru will accept more temporarily assigned employees from its parent, Oisix ra daichi, a Tokyo-based vegetable delivery service.

The average number of customers per truck is 150. When Tokushimaru increases its "infrastructure" to 500 trucks, it will begin providing information, especially to customers "in their 70s and 80s who do not drive cars," Sumitomo said.

Sumitomo said he expects this to create "new types of media and advertising businesses," luring people without much access to social networking sites or online advertisements.