Chinese group gains ground on Amazon in Spain and France 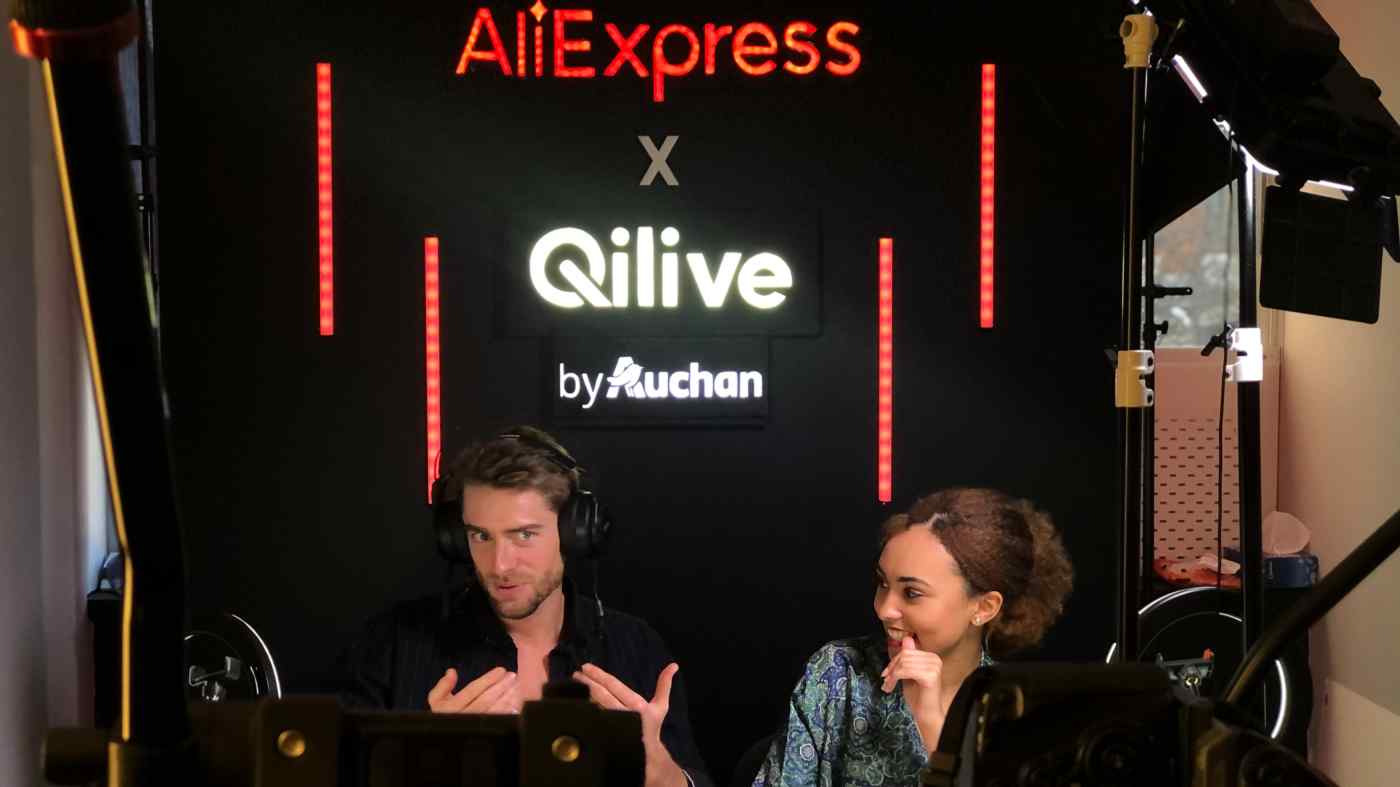 HAMBURG, Germany -- Jennifer Friess stumbled on an ad for an online sales promotion job as she was surfing the web for work clothes a year ago.

Soon, Freiss, a model and comedian, was hosting a French livestream from Paris on Alibaba Group Holding's AliExpress app around four times a week, pitching imported Chinese appliances and other products.

"One year ago, I couldn't have imagined working for such a major Chinese company, but today I couldn't imagine working without them, given that it fits so well with my professional background," Friess said. "I am sure that even when we are through with the COVID-19 lockdowns and the theaters have reopened, I will stick to AliExpress and combine it with my other jobs."

Friess is one of around 100 local French recruits now appearing on AliExpress, part of a global army of 1 million contributors the Alibaba unit aims to deploy by 2023 to build up the Chinese group's overseas sales.

In the nine months to Dec. 31, Alibaba's overseas online retail division, which also includes South Asia's Daraz and Southeast Asia's Lazada, generated 24.96 billion yuan ($3.84 billion) in revenue, up 32% from a year before but still only accounted for 5% of the group's total receipts.

Overseas wholesale operations counted for another 2% of total revenues, but Alibaba remains far away from the goal set by founder Jack Ma in 2015 of generating half of group sales overseas by 2025.

Within China, vendors made more than 400 billion yuan in sales through Alibaba's Taobao Live livestreaming platform last year, according to the company.

Beijing, though, has signaled concern about the livestreaming sales trend amid heightened scrutiny of the country's top internet platforms. Last week, the State Administration for Market Regulation said it had met with several leading players in relation to false advertising, poor after-sales service and substandard products.

Out of 12 Western European makers, AliExpress has made the most headway in Spain, where it launched livestreaming in 2019 and now has around 180 hosts. According to a survey in late 2020 by delivery company Post Nord, some 45% of Spaniards said they had bought from AliExpress and considered it a favorite platform.

AliExpress' share of annual retail e-commerce sales in Spain rose from 3.9% in 2018 to 4.8% last year while that of U.S. rival eBay was nearly unchanged, according to data compiled by Euromonitor International.

AliExpress launched livestreaming in France, as well as Poland and Brazil, last May. It has since widened its lead in France over eBay, though its market share last year was still just 1.7%, according to Euromonitor.

Amazon.com remains far ahead in both France and Spain, but Martin Schulte, a European consumer goods and retail partner at consulting company Oliver Wyman, said the American online retailer's hold on the two markets is weaker than in Germany and the U.K. "This fact has obviously been shaping AliExpress's strategic timeline," he said.

Other Chinese-owned online shopping apps like Shein, Club Factory and Zaful are also increasingly targeting Europe and making more use of livestreaming. Oliver Wyman projects that Chinese online retailers will generate 10 billion euros in annual revenue from Europe by 2025.

AliExpress declined to say how much it is investing in its European push. The company, though, highlighted commissioned research by Forrester which found that almost half of Europeans surveyed said they had increased their viewing of livestreams due to the COVID pandemic and a majority said they were making online purchases more frequently.

Hosts like Freiss can earn as much as 2,000 euros ($2,386) a month through session fees and sales commissions. Local agencies often recruit technology bloggers and artists with large social media followings to be hosts, according to AliExpress spokeswoman Haili Cao.

Each appearance lasts 45 to 90 minutes. Viewers click on a "shopping cart" icon to purchase the items being showcased, about 80% of which are usually Chinese.

Freiss recently was showing off a 25.94-euro LED smart sports watch from Qilive, the in-house brand of French retailer Auchan. Short viewer comments -- "Oh, this is really cool" -- scrolled across the bottom of the screen as audience likes clicked past 11,000.

"European viewers are impressed by specific niche expertise whereas the Chinese are receptive to mega-celebrity hosts pitching an enormous range of products," said Mana Zhou, head of social commerce at AliExpress France. She added, "In France, purchase decision-making is significantly slower than in China."

Supply lines are more of an issue for Alibaba in Europe than in China, however. Said Zhou, "Western European hosts would typically each week be given a list with a selection of products to choose from that are readily available in the European warehouses so as to avoid making the shopping experience unsatisfactory through long waiting periods."

Alibaba is working to improve logistics from China to sustain the flow of goods for AliExpress hosts to promote. The group's Cainiao Smart Logistics Network unit has been expanding its network of European warehouses and is transforming previously sleepy Liege Airport in Belgium into a regional freight hub.

Mei Wang, who leads a global program linking the venture capital arm of Accenture with Chinese startups, said it made sense that AliExpress would focus its Western European push on Spain and France.

"These are the countries in Europe where social interaction with friends, families and colleagues is a very important part of the culture and also one of the factors that influence purchasing decisions," she said.