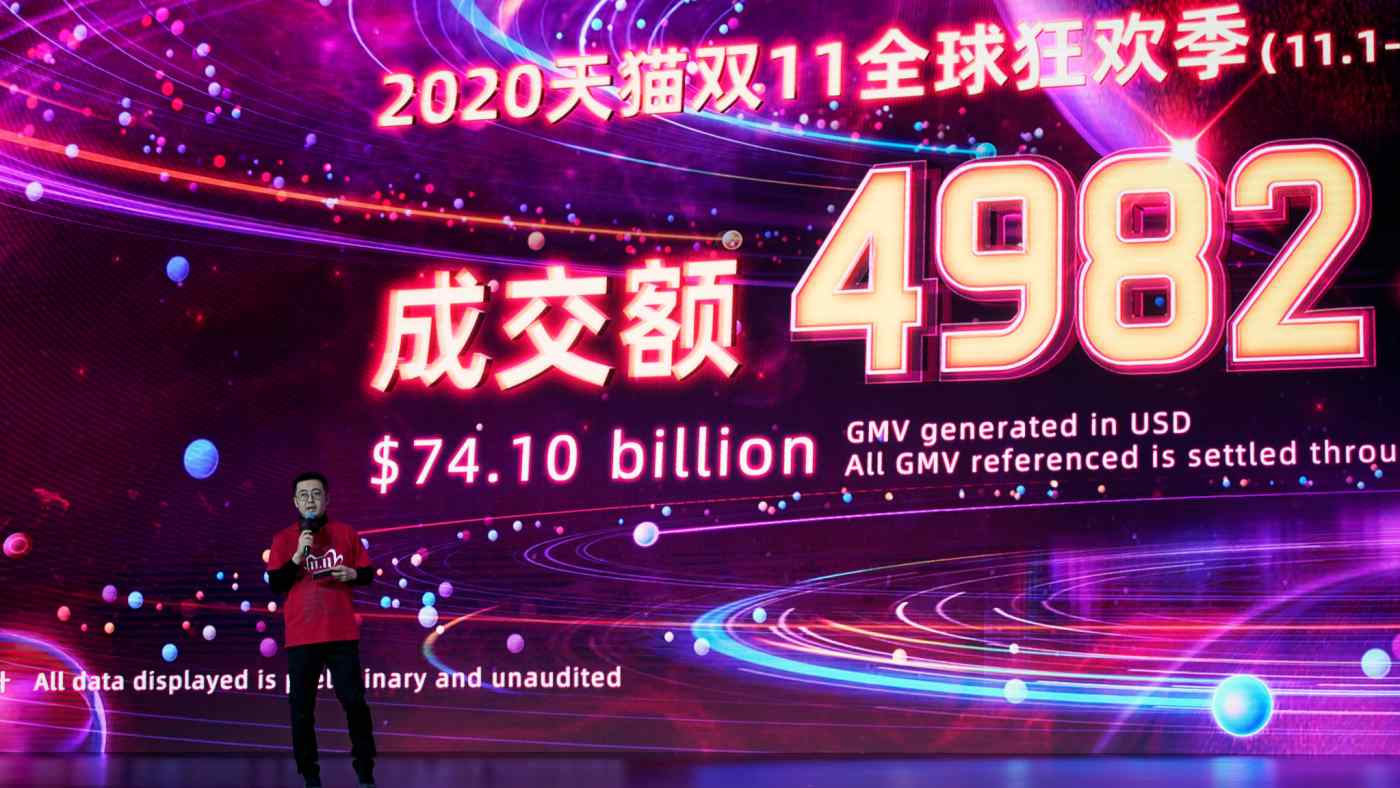 According to data published by Alibaba just after midnight Thursday, buyers had snapped up 498.2 billion yuan ($74 billion) of goods. Even the accumulated transaction volume after the first half-hour surpassed the full sales total of last year's event, when merchants on Alibaba's platforms sold 268.4 billion yuan of items.

Livestreaming has played a bigger role in enticing price-sensitive customers this year. During the peak of the sales event, some 583,000 orders were placed each second, with hundreds of millions of shoppers logging on from midnight to grab bargains.

Known as Double 11, and also branded by Alibaba as the "11.11 Global Shopping Festival," the promotion is the world's largest retail event. This year, Alibaba added an additional sales window from Nov. 1 to Nov. 3 and allowed customers to lodge preorders as early as Oct. 21.

The festival, which evolved from an unofficial holiday to celebrate the lives of single people, is expected to offer a glimpse of consumer appetites in the world's second-largest economy, which is recovering strongly from the coronavirus pandemic.

But this year's event comes as regulators in Beijing have proposed new guidelines to rein in the influence of leading internet companies, whose services have penetrated into every aspect of life in China.

The draft guidelines target online retail platforms' practices, such as requirements that vendors operate on one company's platforms exclusively and offering different prices to different customers based on their buying history.

"We don't think the guidelines are aiming at Alibaba," vice president at Alibaba Group and general manager of Tmall and Taobao's marketing and operations, said during a press conference on Wednesday. Taobao is Alibaba's flagship consumer to consumer shopping platform, while Tmall is a separate business to consumer platform.

Alibaba has denied that it forbids vendors on its platforms from listing elsewhere. Alibaba earns revenue primarily by charging vendors marketing and advertising fees to promote their products.

As the coronavirus pandemic had kept more people at home this year, livestreaming has become an increasingly important channel to capture customers.

In the 12 months ended in September, gross merchandise volume from Taobao's live channel reached 350 billion yuan, close to 5% of the group's annual GMV in the 2019 fiscal year.

Between March and June, the number of visitors to the channel rose 160% while the number of participating merchants surged by 220% from same period last year.

The format is expected to play bigger role in driving overall retail sales. More than 400 company executives and 300 celebrities are conducting livestreams during the Singles Day promotion.

However analysts cautioned that Singles Day might not be a reliable barometer of a strong recovery of consumption in China.

"The rules of this year are very different from last year," said Ernan Cui, China consumer analyst at Gavekal Dragonomics. "It is difficult to tell whether consumers are buying as much."

Cui said the additional sales window and expansion of promotions to include Alibaba-linked services platforms have helped to boost transaction volumes. But some categories affected by the coronavirus pandemic -- particularly big-ticket products, such as overseas travel packages -- are far from reaching previous years' levels, she said.

"The purchasing behavior of Chinese consumers has not returned to usual," Cui said.

This year, shoppers seem to have more reasons to stockpile goods. For one, retailers tend to offer deep discounts to boost sales after experiencing dwindling sales in the first half of the year.

Kelly Chai, an employee at a technology company in Beijing, bought a jar of eye cream on Wednesday, even though she still had an unopened jar at home. "I saved more than 200 yuan on it," she said.

People are more likely to stockpile daily necessities after experiencing the lack of resources in the early days of COVID-19," said Shirley Li, assistant professor at Hong Kong Baptist University, as people want to regain a sense of control.

Beyond China, Alibaba's cross-border e-commerce platforms, including Lazada Group of Singapore, are running their own versions of Double 11, targeting customers in Southeast Asia and other regions.

For Alibaba, this year's event also comes hard on the heels of a further setback -- the postponement of the planned initial public offering of Ant Group, the fast-growing financial technology company one-third owned by Alibaba. Both Ant and Alibaba were founded by Jack Ma, the billionaire tech entrepreneur.

The Ant IPO was shelved after Beijing moved abruptly to tighten regulations governing the company's lending activity. While Ant is expected to try to revive its listing plans, analysts expect the rule changes will slash the valuation it can achieve.

Some observers have seen the regulatory actions as a warning to Ma, who remains Ant's largest shareholder but no longer has a formal role at either company, not to challenge Beijing too directly.