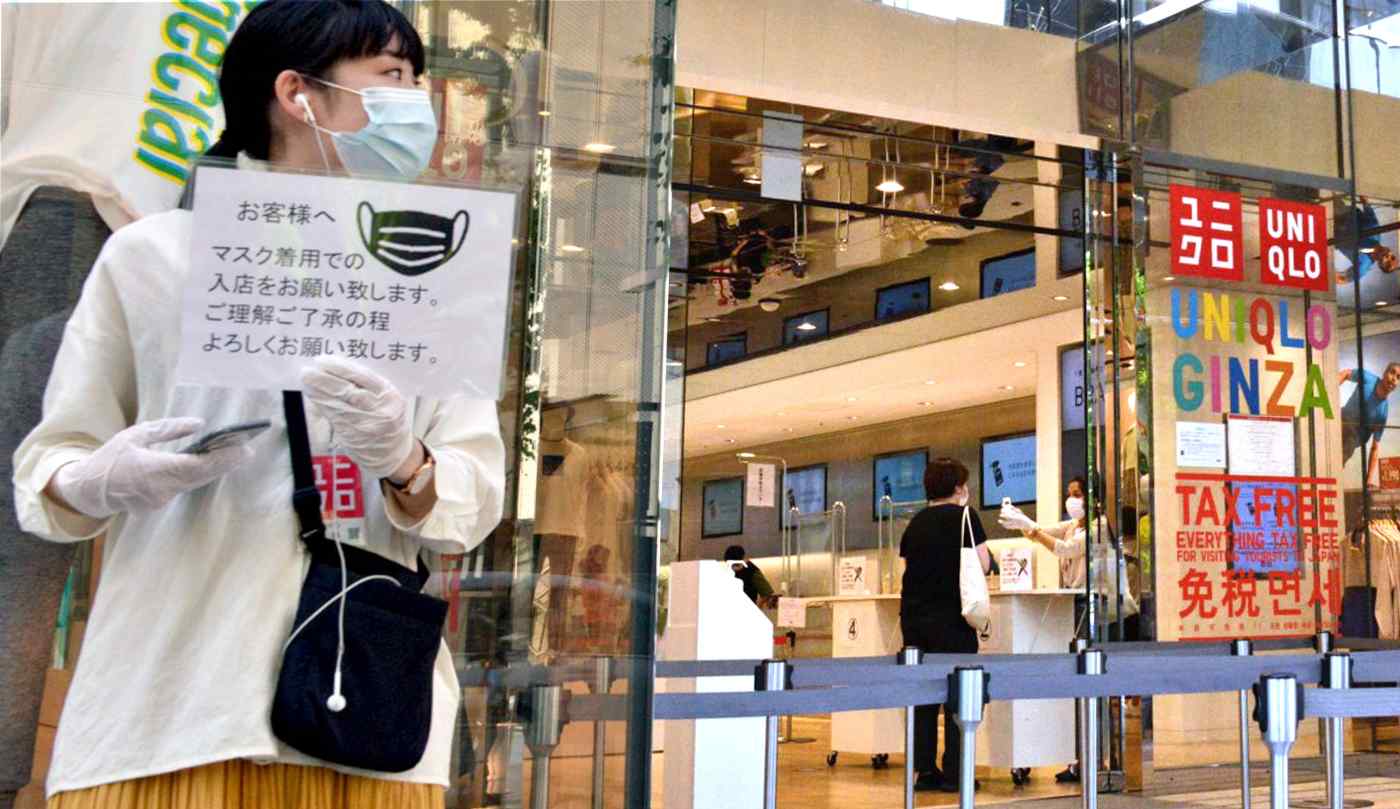 TOKYO -- When Uniqlo reopened its flagship clothing store in Tokyo's upscale Ginza district on May 11 after a monthlong shutdown, masked greeters took the temperatures of customers, who were told to wear masks and sanitize their hands.

Nothing was left to chance. "As long as we're open, we will not produce one infected person," store manager Shunsuke Kanno said.

Every other fitting room was locked for social distancing. Still, foot traffic was high.

"I came to buy a present for my grandson," a 65-year-old grandmother said. "Other places everywhere are closed, so I've been waiting for this day."

Tour buses used to unload foreigners at the entrance -- a new feature of Ginza's pre-pandemic landscape.

The tourists stopped coming when the new coronavirus slammed China in January. The store temporarily shut its doors on April 8 under the state of emergency imposed on Tokyo and six other prefectures.

Uniqlo parent Fast Retailing in April slashed its earnings forecasts for the fiscal year ending Aug. 31, downgrading net profit growth to a 38% drop, because of disruptions from COVID-19. Revenue and profit will drop for the first time since the year ended August 2003, during the slump that followed the fleece boom.

"I think this is the biggest crisis that humankind has faced since the Second World War," Chairman and CEO Tadashi Yanai said in the news conference.

Yet Yanai also spoke out against across-the-board business shutdowns in an interview with Nikkei. Companies should be free to make a contribution through their mainline operations, he insisted.

"Business leaders need to take the lead in dealing with this problem," Yanai said. Don't kill the economy over the coronavirus, Uniqlo chief says

So Uniqlo went ahead and launched its open-air shopping park, Uniqlo Park Yokohama Bayside, on April 13. With the emergency order barely a week old, a nearby mall postponed its own opening.

Yanai himself stopped by Yokohama Bayside for an evening visit that day. "This is a great outlet," he said. "Make sure to show everyone that we are open."

In April, just 310 of 810 Uniqlos nationwide were closed. Most of the idled stores were tenants shut down by shopping centers. Uniqlo kept as many free-standing locations open as possible.

"Closing up is easy enough, but what do you do about inventory and jobs?" Yanai asked. "Will the government compensate us?" The rhetoric suggests that Yanai believes the retailing industry should fulfill its role of maintaining jobs and supporting the economy.

Fast Retailing will continue to keep employees on the payroll across the globe as national laws permit. Although the financial burden weighs heavily, the group sees it as necessary to attract and retain top talent.

Propping up the ongoing operations is not Yanai's will alone. Lessons learned from Chinese operations also play a big role.

The epidemic led to temporary shutdowns of roughly 390 outlets in China -- half the Uniqlo chain there. Stores remaining open quickly learned that temperature checks and hand-sanitizing upon entry are key to staying open.

Social distancing protocols were enforced on employees and customers alike. Workers take lunch breaks in rotation, and conversations are kept to a minimum.

Thanks to such measures, none of the 30,000 employees on the mainland contracted COVID-19.

Fast Retailing did not satisfy everyone, of course. It fielded daily complaints from critics questioning its decision to remain open.

"You're being unscrupulous," one said.

On the sales floor, employee reaction has been mixed.

"I'm happy to be able to return to work," one view went.

But "some people are not coming to work because they are worried about getting infected," an employee said.

Yanai remains upbeat. Visiting the Ginza store on May 15, he sensed a positive vibe from customers who had come back.

"There were more people who were thankful we opened instead of criticizing us," said Yanai. "I was able to see from a new light what type of business we do."

The coronavirus crisis has once again hammered home the importance of physical stores to Fast Retailing's operations. The world's third-largest apparel seller aims to reinvent itself as a data-based manufacturer and retailer that produces clothing based on global customer preferences and minimize dead stock.

But to make the most of its data-gathering operation, Fast Retailing must up its digital game. E-commerce sales account for just over 10% of the group's total sales. Yanai acknowledges that the organization is only about a third of the way toward its goal.