OSAKA -- The Japanese maker of the Miki House brand of children's apparel will expand its presence in Asia, targeting affluent consumers in China and elsewhere as the outlook for its home market dims.

Osaka Prefecture-based Miki Shoko plans to have a total of 75 stores outside Japan at the end of this year and more than 90 at the end of 2021, with around 80 in Asia alone, double the figure three years earlier. Miki House locations have also opened in Oceania, North America and Europe.

The push comes as low birthrates and plunging tourism limit its prospects in Japan. The number of Miki House shops in Japan declined by a quarter over five years to 116 at the end of August, due to factors including department store closures, and overseas locations will likely exceed domestic ones within the next several years.

Miki House stores outside Japan typically measure around 50 to 70 sq. meters, somewhat smaller than their counterparts at home. The selection includes undergarments for babies and outfits for young children, including hats and shoes, that can be coordinated from head to toe.

Prices in overseas stores run nearly twice as high as in Japan, to recoup the cost of transporting products and opening new locations. The company emphasizes Japanese craftsmanship to stand out in a highly competitive field.

Miki House stores overseas are operated by local businesses or individuals, who buy stock imported from the Japanese company. This model saves Miki Shoko the cost of opening stores and maintaining its own inventories. The company alone chooses locations and designs stores, to maintain its brand image, but limits itself to recommendations when it comes to product lineups and prices.

China accounts for 80% of new shops opened outside Japan since 2019. A Miki House store launched in August in the Disneytown mall next door to Shanghai Disneyland. Another opened last month on the island of Hainan -- a popular resort destination -- in the world's largest duty-free shopping center, which is open to both foreign and local travelers.

The Chinese government's efforts to stimulate the economy amid the pandemic have boosted big-ticket purchases by well-off consumers. As a well-known premium brand, Miki House benefits from this trend. The company says it has seen brisk demand for infant undergarments that cost nearly $100. 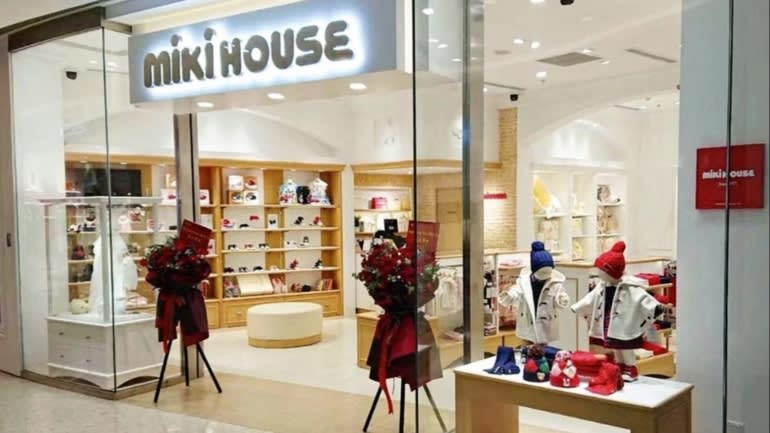 Miki House stores can also be found in Taiwan, Hong Kong, Macao, Singapore, South Korea, Thailand and Indonesia. The chain opened its first location in Vietnam this year, and potential new markets next year include Mongolia, India and the United Arab Emirates.

With Japan's birthrate declining, Miki Shoko has been buoyed largely by inbound tourism in recent years. Foreign visitors to Japan accounted for over 20% of the company's 20.7 billion yen ($196 million) in revenue for the year ended February.

But revenue for the March-August half dropped 35% on the year, partly because Japan's department stores shut down temporarily amid the pandemic, squeezing the company's main sales channel at home.

Exports account for roughly 10% of total revenue. Because these shipments are made on a wholesale basis, they tend to contribute heavily to profits and are becoming increasingly important in the pandemic era.

Miki Shoko's expansion overseas is largely driven not by directly operated stores or by franchises, but rather customers who are such big fans of its products that they decide to sell the items themselves.

For example, the owner of a store that opened in Qingdao, China, last year "just happened to shop at a Miki House in Nagoya during a trip to Japan when their kid was small," according to Miki Shoko President Koichi Kimura.

"The item stayed in good shape no matter how many times it was washed, and the owner approached us saying they too wanted to sell products like that," Kimura said.

But this unique model also pose challenges for the company in terms of communicating and steering its diverse group of store owners. Foreign graduates in Japan have been playing a key role in this since the company began regularly hiring them in the spring of 2017.

Of the roughly 150 new graduates Miki Shoko has hired in the four years since, over 30% had come from China or another foreign country. The company will need to ramp up hiring of foreign graduates as it makes further inroads abroad.

Online sales will also be a key piece in its overseas strategy. The company currently does not allow overseas customers to access its Japanese e-commerce site to prevent them from taking advantage of price differences.

"I aim to offer different products online from our brick-and-mortar stores and open it up to customers from all over the world," Kimura said.