SHANGHAI -- Che Yingjie has not flown in more than a year, but on Saturday she is headed with a friend to China's southern island province of Hainan from Beijing for a three-day shopping spree.

"It is a trip that I have longed for," said Che, a tutor, who before COVID-19 usually made an annual overseas shopping trip with her friend. This time, after getting vaccinated, she is targeting nine malls in Hainan where domestic travelers can buy imported goods duty-free.

"I want to get some cosmetic products that Shiseido is launching, as international travel is still difficult," she said, referring to the Japanese consumer-goods group.

Che's plans for the Labor Day holiday, which runs through Wednesday, will provide a test for President Xi Jinping's "dual circulation" model that calls for utilizing China's sizable domestic market to offset trade tensions with the U.S. and international economic uncertainty.

Various official tourism and shopping events are kicking off nationwide on Saturday and the days following, in partnership with industry players, to spur private consumption. Passengers at Shanghai's railway station on April 30. Officials estimate that a record 250 million people will travel during the Labor Day break, or 28% more than in pre-pandemic 2019.   © Reuters

Shanghai is kicking off a two-month "Double Five Shopping Festival" on Saturday, with 1,900 events lined up to tap spending across food and beverage, haute couture, automobile and household products.

International brands including L'Oreal and LVMH are slated to launch new products, while major e-commerce platforms such as JD.com and Pinduoduo will host promotional sales.

All rooms at the flagship Shanghai Disneyland Hotel, including the 13,750 yuan ($2,120) per night Sorcerer Suite, have been sold from May 1 to May 5, according to the resort's website.

Chinese officials have projected that a record 250 million people will travel during the five-day break, or 28% more than in pre-pandemic 2019.

Trip.com's domestic online platform had received 23% more airline bookings and 43% more hotel bookings than in the comparable period in 2019, at higher average prices, as of April 22.

In Hainan, authorities are gearing up for the inaugural China International Consumer Products Expo starting on May 7. The organizer aims to draw more than 1,300 brands from 69 countries and 200,000 visitors to the four-day event. 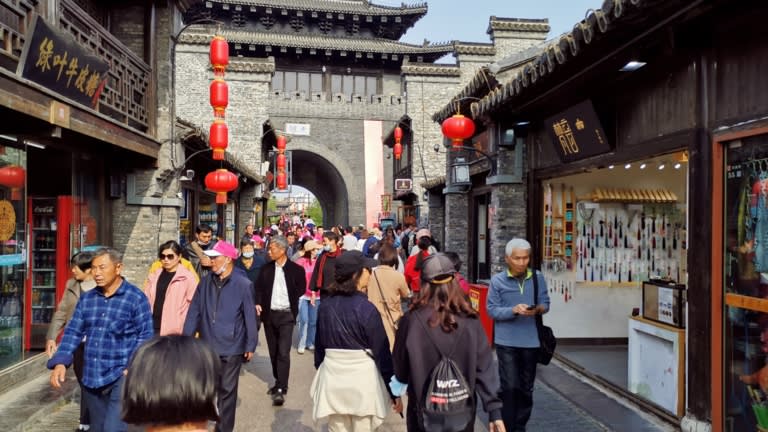 Tourists stroll along Dongguan Street, part of the restored ancient town in Yangzhou in the eastern province of Jiangsu. (Photo by CK Tan)

The event is part of the move to position Hainan as the country's hub for travel and duty-free shopping. The island's duty-free sales are projected to exceed 60 billion yuan this year, up from 27.5 billion yuan in 2020, a provincial official said last week.

Visitors to the island grew 19% to 4.5 million people last year after the government increased the annual tax-free shopping quota per person to 100,000 yuan from 30,000 yuan. Smartphones and laptops were among the newly added goods entitled for tax exemption, bringing a total product category to 45, up from 38.

Businesses are gearing up for increased shopping.

"Hainan will be a pivotal priority for Cainiao in the coming years, and we expect to open more direct cargo routes to link Japan, South Korea, Australia, New Zealand and Europe to Hainan soon," said James Zhao, a Cainiao executive.

China's total retail sales grew 34% annually in the first quarter this year from a lower base wrecked by a nationwide lockdown in 2020. On a quarterly basis after seasonal adjustment they grew 1.8%, reflecting subdued consumer sentiment amid sporadic COVID-19 outbreaks.

"Given these two key issues, there is a rising risk that China will not achieve a sufficient level of herd immunity for its population in 2021, which would mean that social distancing measures will have to remain in place for longer, negatively affecting the recovery of the services industry and weighing on private consumption," Fitch wrote in a report on April 16.

The ratings agency lowered China's private consumption growth forecast in 2021 to 8%, from 10% previously.

The country had administered 244 million vaccine doses as of April 28, official data showed, part of a target to vaccinate some 560 million, or 40%, of its 1.4 billion population by June.