KUNMING, China -- Pinduoduo, operator of China's second-biggest e-commerce market, got its start as a platform for farmers to connect with urban shoppers through livestreaming events and other online tools. Now, the company is taking digital technology into the fields to capitalize on surging demand for safe, reliable produce in the wake of the coronavirus pandemic.

Lin Sen, a researcher based at Beijing's National Engineering Research Center for Information Technology in Agriculture, is part of that effort. He and his team are taking part in a Pinduoduo-organized competition to grow strawberries using either traditional methods or internet of things-enabled solutions.

Though based in the capital, the team's test patch is some 2,800 km away in a greenhouse in Kunming.

"The sensor will send data through cloud computing that will enable us to control the water and temperature in the greenhouse remotely," Lin explained, pointing to a camera-like device as he gave a tour of the greenhouse. 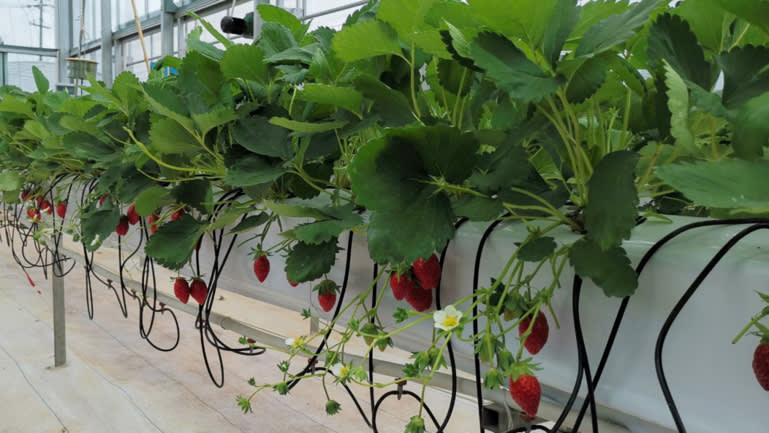 Multiple sensors monitor everything from the crop height to pest-control.

The goal of the contest is to determine the best way to produce an economical, high-quality crop, part of Pinduoduo's initiative to improve the value-chain of its food offerings.

"We use agriculture produce to build the stickiness and consumer habit on our platform and leverage the experience to offer different products," David Liu, Pinduoduo's vice president, told Nikkei Asia in a recent interview.

The timing for such an initiative is ripe, as consumers remain cautious about the safety of wet markets and other traditional food markets following the outbreak of the coronavirus. The first confirmed cases of coronavirus were associated with a wet market in Wuhan.

"We have purchased groceries online more frequently since the pandemic," said Lina Xie, a public servant in Shanghai. "It is convenient and hygienic, with product labeling that gives us peace of mind."

Xie belongs to a category of educated online consumers, some of them new converts, that e-commerce players like Pinduoduo are attempting to woo with premium agricultural products.

It is a segment that Pinduoduo knows well. Backed by internet giant Tencent, the Nasdaq-listed company began as an online platform in 2015 specializing in farm products, a focus that mitigated direct competition with established players like Alibaba Group Holding's Taobao and JD.com.

Unlike its two peers, which also operate in other business segments, Shanghai-based Pinduoduo has remained a pure-play online marketplace. Once seen as an underdog, it grew rapidly, largely by catering to price-conscious consumers in lower-tier cities. Pinduoduo boasted 683 million active users as of June 30, trailing Taobao's 742 million users to emerge as the second-largest marketplace.

A major selling point for Pinduoduo, which means "tag more" in Chinese, is its unique shopping model: Customers can receive discounts if they tag another buyer on the app or within their contact list when making a purchase.

Pinduoduo's association with Tencent has also helped, as it is able to draw traffic from the latter's popular social media platform.

Farm produce accounted for 136.4 billion yuan ($20 billion) or 13.6% of Pinduoduo's gross market value in 2019, tracking an annual growth pattern of over 100% since its founding. That makes Pinduoduo one of the largest players in the segment, though the definition for agricultural food varies across different platforms, making direct comparisons difficult.

"We are expecting it to double this year, too," Liu said.

Liu said the group is hoping to sell 1 trillion yuan worth of farm produce in the next five years, an "ambitious but achievable" target.

He is optimistic, he said, because of the low market penetration of agriculture goods, which account for about 5% of the total products sold online.

And as consumers continue to avoid wet markets, the market for e-groceries and food delivery will rise to 882 billion yuan in 2022, up from 394 billion yuan in 2019, according to an estimate by brokerage firm CLSA.

To help drive sales, Pinduoduo is focusing on the "premiumization of products and boosting safety," Liu said. For example, the group is working with Singapore's Agency for Science, Technology and Research to develop a cost-effective test for contaminants, a project that both aim to complete in 2023 before commercializing it. "Investing in the upstream of the value-chain and leveraging the farm-to-table model cut transaction costs and improve efficiency," said Feng Linyan, an analyst with research firm EqualOcean in Beijing. "Such efforts help Pinduoduo retain its users, upselling them to distinguish itself from Alibaba and JD.com."

Other players are also jumping into the fray, however. JD.com is using its knowhow in e-commerce, deploying big data and artificial intelligence to help farmers. Specifically, the Beijing-based group is lending its satellite remote-sensing technology to help map potato and rice fields in Shanxi Province. The data will be used to improve crop yields, while blockchain-encrypted data will provide key information for product packaging.

Huawei Technologies recently deployed its 5G technology in partnership with China Mobile on an unmanned farm in Shandong Province.

While Pinduoduo may lead as a technology-enabled provider of produce, there is no guarantee it will succeed in achieving its target, as almost every e-commerce player in China is adopting a similar model, according to Sofya Bakhta, a marketing strategy analyst at Daxue Consulting in Shanghai.

And there is also the matter of cost to consider, though the adoption of technology is scalable, starting from a basic level for small operations, said Fulco Wijdooge, general manager of Ridder, a greenhouse builder from the Netherlands with operations in China.

"We think we are heading in the right direction, not only through our own effort but because the industry is becoming more acceptive of e-commerce in agriculture," Liu said. "Specifically for agriculture and fresh produce, I think people's acceptance for the convenience has increased, and this is particularly true with the younger generation, people born after the 1990s."