SINGAPORE -- To see the extent of the economic crisis gripping Singapore -- which last week recorded its steepest ever monthly retail sales fall -- just take a random walk down Orchard Road.

Instead of being crowded with people, the gleaming white floor of Apple's flagship store is strewn with fallen leaves.

Neighboring luxury brands such as lingerie retailer Victoria's Secret and Italian luxury brand Gucci seemed frozen in time, with plastic sheets draped over their window displays, as the Singapore government has been forced to extend lockdown measures to control a coronavirus outbreak running rampant through the city-state's migrant worker community.

"There are no tourists," said Rosli Hamad, who manages a pizza stand on Orchard Road, and who estimates that number of people on the streets has fallen by at least half. "Because a lot of the shopping centers are closed, we hope for the locals (to come by)," said.

The pandemic has hit merchants hard, not just in the city-state but elsewhere in Southeast Asia, and the numbers across the region tell the story. Singapore on Friday reported that retail sales had slumped 40.5% on-year in April to hit SG$2.1 billion.

The last time Singapore saw figures that low was in February 2011, according to Singapore's statistics department. Since then, monthly retail sales have always exceeded SG$3 billion. In December and January, retail sales topped SG$4 billion. In Indonesia, the country's Shopping Mall Association estimated at least 9.8 trillion rupiah ($682 million) in losses over the past two months. Conglomerate Astra International, which accounted for half of Indonesia's car sales, reported a 90% drop on-year for April sales.

During the Islamic holy month of Ramadan, which ended on May 23 and which is traditionally a busy shopping period, Southeast Asia's largest economy saw muted consumption this year. According to the Central Statistics Agency, or BPS, Indonesia record reported a 0.07% month-on-month inflation in May, which overlapped with most of the Islamic fasting month -- a sharp drop from the 0.55% inflation for the same period last year.

"Ramadan and (the adjoining holiday of) Idul Fitri typically saw increases in demands due to various needs, therefore high inflation," BPS head Suhariyanto said. "But we are all aware of this non-ordinary situation, much different from previous years."

With Jakarta easing its partial lockdown, and shopping malls across the Indonesian capital be allowed to reopen on June 15, spending is not expected to recover quickly as malls will only be able to receive visitors at half their capacity.

In Thailand, which is starting to emerge from its own lockdown with department stores and malls able to operate again, limits on the number of people allowed to enter establishments is still weighing down retail businesses. 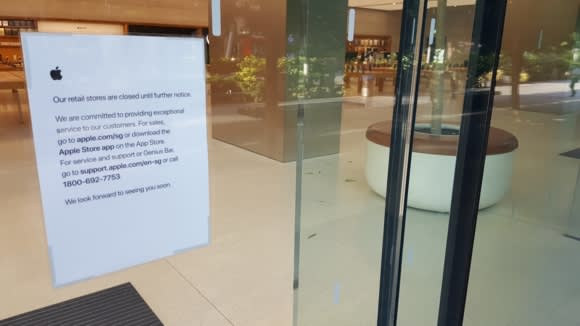 According to the Economic Intelligence Center, or EIC, the kingdom's retail business is expected to drop by 14%, or around 500 billion baht ($16 billion), from last year's market value of about 3.5 trillion baht, on weak tourism and tepid domestic spending amid the pandemic.

The need for retailers to implement sanitation measures for public hygiene has also pushed up operation costs for brick-and-mortar stores, while the EIC estimated that a 67% fall in foreign tourists from 39 million in 2019 to 13 million this year could cut tourism-related retail revenue by up to 270 billion baht.

Thai retail businesses have so far reported muted earnings for the year.

Taking the first five months of the year, total retail sales of goods and services was down 3.9% on-year to 1,913 trillion dong. Within Southeast Asia, the country had among the fewest reported cases of coronavirus infections, and accordingly had less severe lockdown measures than Singapore or Indonesia. 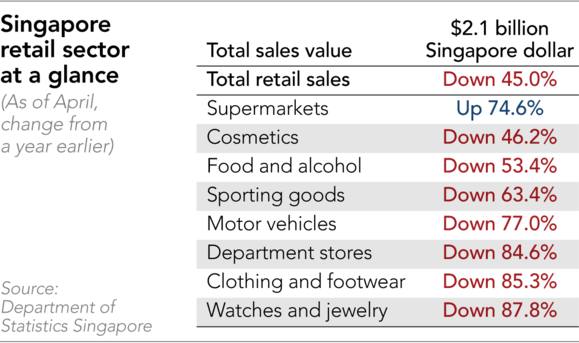 The only bright spot on the horizon has been e-commerce, which has emerged a winner. One of Indonesia's leading e-commerce platforms saw sales "hovering around an all-time high range" in April, while Singapore's Shopee also saw surges in transactions from stay-at-home shoppers.

Supermarkets and grocery shops have seen spikes in buying as well, up 74% in April compared to the same time last year, with daily essentials and food items topped the list of sales amid the general pullback in consumption.

Whenever retailers can finally re-open fully, and Southeast Asia can begin to shake off various lockdown measures, Bidhan Roy, head of commercial and small business at tech conglomerate Cisco, said that they still be returning to a 'new normal'.

With new rules enforcing safe distancing measures as shops resume their operations, Roy said many businesses will need to take additional steps such as adopting new technology to cope with the demands of adhering to new public safety regulations.

"It is important to remember that the retail stores we left will not be the ones we will go back to," said Roy. "A lot will change."