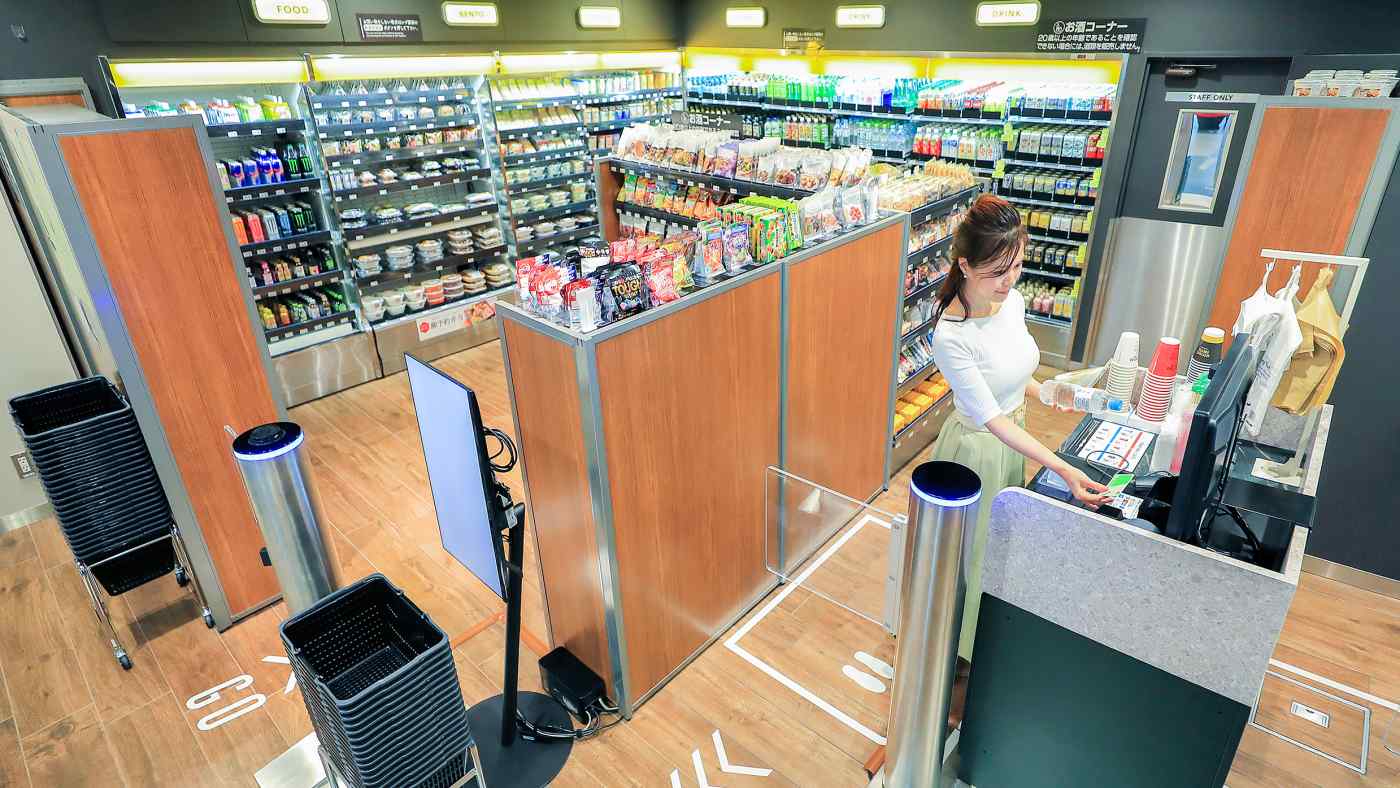 TOKYO -- Convenience store operator FamilyMart looks to open about 1,000 unstaffed shops by the end of fiscal 2024 offering the same products as the chain's regular outlets, in the first large-scale deployment of fully automated stores in Japan.

Japan loosened regulations last year that required stores to have employees on staff. The country's labor shortage is set to intensify as the population continues to decline, and more businesses are moving to streamline operations using digital technology.

Japan's labor productivity ranks the lowest among Group of Seven nations and only 21st among the 37 members of the Organization for Economic Cooperation and Development.

Automation has become essential for retail, which lags other industries in improving productivity, but food sanitation laws required retail shops that handle food to have a sanitation supervisor on site. In June 2020, responding to repeated demands from retail industry groups for deregulation, the health and labor ministry said that sanitary control could be done by patrols.

Payment systems are another important element of automated stores. FamilyMart will use artificial intelligence-equipped ceiling cameras as well as weight sensors on the shelves to monitor which products a customer picks up. When customers stand in front of a payment terminal, the product names and prices are displayed on a monitor, and they pay electronically or with cash.

The system removes the hassle of reading barcodes and makes it more difficult for customers to shoplift. To protect customer privacy, data that could lead to individual identification -- such as facial images -- will not be collected. Customers will not need to prepare a smartphone app in advance or provide biometric authentication when entering a store.

FamilyMart said it will be able to offer virtually all of the roughly 3,000 items sold in its regular shops. A trial store opened in Tokyo during July was just 50 sq. meters, about 30% the size of a regular outlet. It used about 50 cameras and offered roughly 750 items. The ages of customers buying alcoholic beverages were verified through a monitor on the payment terminal.

The company decided to start the large-scale expansion after confirming that the system operated without problems with about 10 customers in a store at once. The system uses the expertise of Tokyo-based Touch To Go, a company that develops technology for unstaffed stores. It is an affiliate of East Japan Railway, and FamilyMart also holds a stake.

Opening an automated store costs about 20% more than a regular shop, but labor costs can be greatly reduced because employees are needed only to receive and stock merchandise. Labor accounts for 60% of operating expenses at franchise stores, a survey by the Japan Fair Trade Commission found.

FamilyMart has about 16,000 stores in Japan, and the chain opens 200 to 500 new outlets yearly. New stores from this point on will be largely unstaffed.

"We'll be able to open stores in areas that have been unprofitable until now," President Kensuke Hosomi told Nikkei. "We want to contribute to solving social issues, like helping regions with supermarket shortages."

Japan is covered by more than 50,000 convenience stores, but that figure fell for the first time in 2019. The traditional business model limits the locations where stores can be opened, and a new format is needed urgently. Shops also need to address increases in the minimum wage and the shrinking number of workers.

Other retailers are rushing to improve the efficiency of their stores. Seven-Eleven Japan is teaming with tech services company NEC to experiment with automated shops that use facial recognition for payments.

Lawson has introduced a "smartphone cash register" that lets customers read product barcodes with their own smartphones. Kinokuniya, a high-end supermarket, has opened a small grocery outside the gates of Mejiro Station on the busy Yamanote Line, using a system similar to that of FamilyMart.

The U.S., China and other countries are leading the way in automated stores, but they have yet to embrace the model. "Amazon Go" stores once totaled 26, but as of September there were only 22. Some shops have adopted biometric authentication, letting customers pay simply by holding up their palms. But many consumers are uncomfortable with this idea, so companies are exploring ways to jointly use credit cards and app authentication.