Uniqlo has about 2,240 stores in 25 markets worldwide, but hundreds of stores in Southeast Asia, Europe and North America have been shut in response to the coronavirus epidemic.  (Photo by Yuki Kohara)
AKANE OKUTSU, Nikkei staff writerApril 9, 2020 19:42 JST | Japan
CopyCopied

TOKYO -- Japan's Fast Retailing, owner of the Uniqlo casual clothing brand, cut its full-year net profit forecast to 100 billion yen for the year ending August 2020, down 38% from the previous year, as the novel coronavirus outbreak forces it to shutter hundreds of stores worldwide.

That is sharply lower than its previous forecast for a 165 billion yen net profit, up 1% from the previous year. This is the second time the company has cut its earnings forecast for the current fiscal year.

"It is difficult to calculate an accurate earnings forecast," cautioned Takeshi Okazaki, a director, at a news conference on Thursday. The revisions are based on the assumption that the coronavirus epidemic begins to dissipate in June. The forecast may have to be revised again if the outbreak continues, Okazaki said.

As governments around the world lock down cities and ask people to stay home to prevent the spread of the virus, Fast Retailing, like many other consumer-focused companies, had no choice but to close stores as sales plummeted. Uniqlo's online sales account for just 10% of its sales in Japan and 20% in the rest of the world.

"I think [the virus outbreak] is the biggest crisis that humankind has faced since the Second World War," said Tadashi Yanai, Fast Retailing's chairman and CEO. Yanai suggested the pandemic is an example of risks and trends associated with globalization, politics, and financial markets. "I am prepared to rebuild the company by updating old systems," he said.

Uniqlo has about 2,240 stores in 25 markets worldwide, but hundreds of its shops in Southeast Asia, Europe and North America are now closed. Most of its outlets in China and South Korea, by contrast, are open. In its biggest market, Japan, where the government declared a state of emergency on Wednesday, the company has so far decided to close about 190 stores out about 813 it operates. 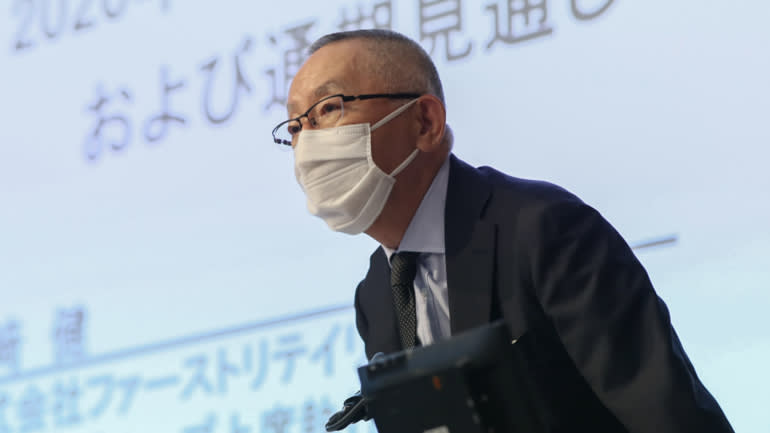 For the September to February period, Fast Retailing's sales dropped 4.7% and its operating profit slid 20.9% from the previous year. Sales suffered in South Korea and greater China, including Taiwan and Hong Kong, due to the coronavirus outbreak, as well as political tension between Japan and South Korea since last year.

According to Okazaki, sales in China recovered somewhat in March. Still, the company expects up to a 40% fall in sales, year-on-year, from April to May in greater China, which is Uniqlo's second-biggest market after Japan. It expects up to a 70% decline in Southeast Asia, South Korea, India and Australia.

Regarding Fast Retailing's businesses with manufacturers across China, Vietnam and the rest of Asia, Yanai said: "We are talking with each supplier about how to place orders so that overall operations can be maintained."

"Since we have global business operations, we are better positioned to avoid an extreme impact on our overall businesses," he added. "I am determined to overcome [the crisis] with our employees and partners, including [supplier] factories."