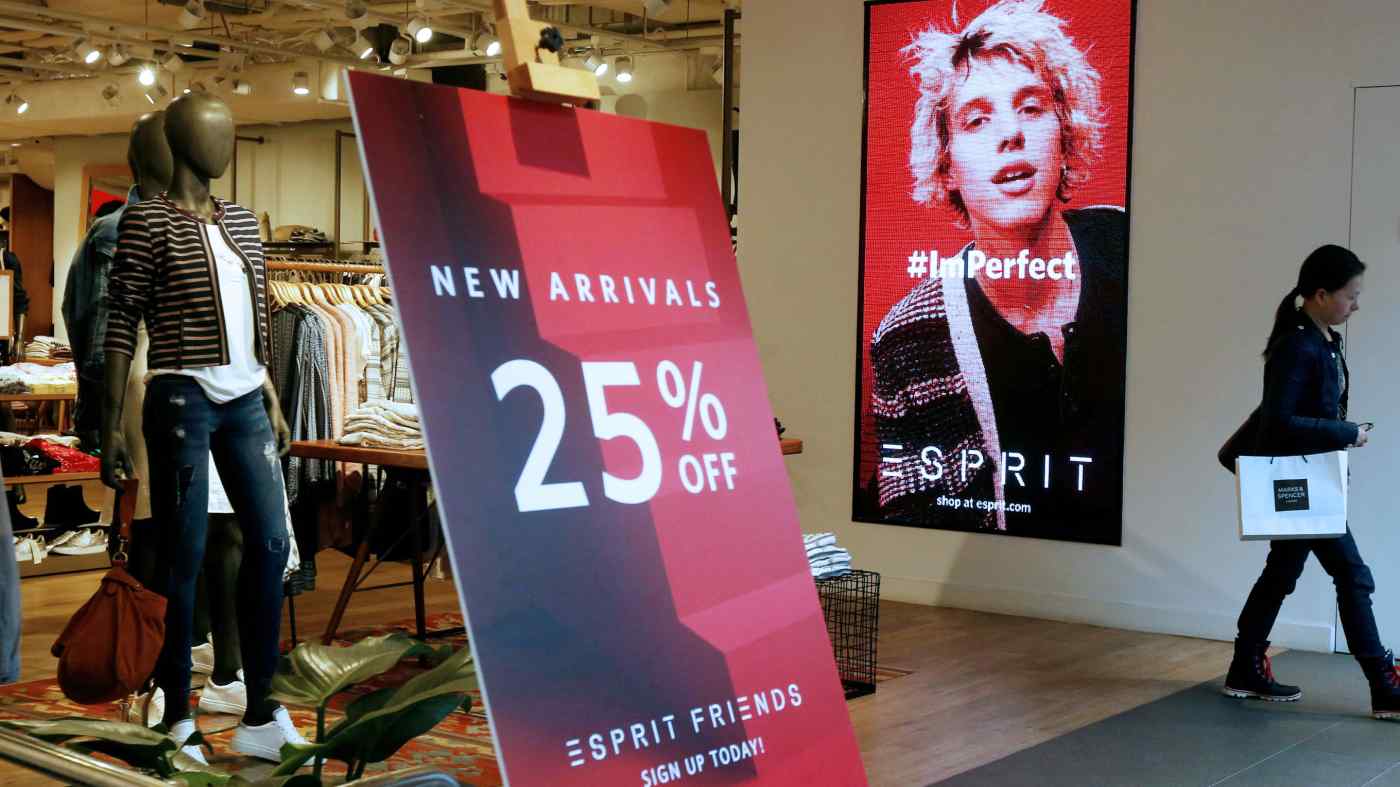 An Esprit store in Hong Kong in 2017. The company's troubles did not begin with the pandemic, but instead trace back about a decade.   © Reuters
KENJI KAWASE, Nikkei Asia chief business news correspondentSeptember 30, 2020 14:02 JST | Hong Kong
CopyCopied

HONG KONG -- Fashion brand Esprit Holdings may be listed in Hong Kong, but you no longer can find any of its stores in the territory.

The company retreated from its entire retail business in Asia at the end of June. Mainland China was supposed to be the exception, operated under a joint venture, but the company said in a statement late Tuesday night that the agreement was terminated at the end of July "due to material breach of terms by the contract partner."

Additional details were not provided, but the company said it is "currently formulating a new strategy."

The withdrawal from Asia is part of Esprit's latest restructuring efforts, which have only been made more urgent by the coronavirus pandemic.

Esprit, based in both Hong Kong and its main market of Germany, disclosed on Tuesday that it recorded another net loss of 3.992 billion Hong Kong dollars ($515.1 million) for the financial year ending in June, worsening from a HK$2.144 billion net loss a year earlier. The bottom line deteriorated largely from an exceptional loss of HK$2.34 billion, including those latest store closures, but also by a 24% drop in its revenue to HK$9.874 billion, back to the level of 2002.

The company has been under a protective shield process, or a Chapter 11-type restructuring, in Germany, to reduce costs mainly through slashing head count and closing stores.

Significant cuts have already been made, but Ophelia Lo Tik-man, the company secretary, said in a statement: "Further store closures are expected to occur in the financial year ending 30 June 2021." Another round of restructuring "will see a further decline in staff costs."

The company expects the entire process to be completed by the end of October.

"The group has taken bold steps," Lo said, adding that the moves are to "ensure that Esprit will return to profitability even in an uncertain market after the pandemic."

But Esprit's predicament did not begin with the pandemic. Its troubles trace back about a decade.

The retailer's sales and net profit peaked during the financial year ended in June 2008, just as the global financial crisis struck. Back then, as a leading casual fashion brand, Esprit was about half the size of Inditex, the Spanish operator of Zara, in terms of sales and net profit. It also was only 10% smaller by sales than Fast Retailing, the Japanese owner of Uniqlo, and boasted more than double the net profit. The warning sign for Esprit appeared two years later, when comparable-store sales dipped 2.4% from the previous financial year. But the company stuck to its path of expansion, looking to cover the downturn at existing stores through bigger sales and a greater global footprint.

Esprit once was a darling of the stock market. The company became a constituent of the benchmark Hang Seng Index in December 2002, and its market capitalization peaked in October 2007 at HK$161.3 billion, or $20.8 billion.

Though this was less than half of Inditex's figure, it was more than triple the size of Fast Retailing. Tadashi Yanai, chairman and CEO of the Japanese retailer, has hailed Esprit as one of the global brands that "inspired" him in the 1980s to adopt the business model on which he later succeeded.

Esprit made its first attempt to balance growth and profitability in September 2011. The company, which originated in San Francisco in 1968, said it would pull out of its North American retail business and close 80 selected shops in Europe and Asia, but simultaneously vowed to continue expanding its store network and rebound in four years.

"The company is determined to do what is right for the brand long-term. No more short-term gains at the expense of the long-term prosperity of the company," Ronald van der Vis, then the CEO, said at the time. The intention was to "bring back Esprit to its full glory and potential."

But this was the beginning of a meandering ordeal that drags on to this day. Van der Vis left the company the following year, and successor Jose Manuel Martinez Gutierrez -- brought in from rival Inditex -- abandoned the restructuring plan soon afterward.

Martinez emphasized cost cutting. While the top line continued to shrink, the company recorded its first net loss in 2013 and lost blue-chip status in the Hang Seng Index to Galaxy Entertainment Group, a Macao casino operator, the same year.

The downward spiral never ended, with Esprit reporting revenue declines for nine straight years, while recording five net losses in the past eight years. Martinez and other executives that he brought in from Inditex left the company in 2018. Many analysts ceased covering the company and now it is officially left with just one. Market capitalization has shrunk by 99% to below $200 million, less than 1% of Fast Retailing and Inditex.

For Simon Tye, executive director at market-research agency CSG, Esprit lost out to rivals such as Zara and H&M as they expanded globally in the 2000s offering lower price points than Esprit along with "better quality" while being "more fashionable."

"And then, Uniqlo came and took over, because Esprit was supposed to be that staple," Tye said, noting that Uniqlo was able to offer casual options that were much cheaper.

When Esprit was at its zenith in 2008, there were fewer than 300 Uniqlo shops abroad, compared with over 1,300 in Japan. By the time Japan's Fast Retailing dual-listed its shares in Hong Kong in 2014, Uniqlo had amassed over 1,000 outlets outside Japan. Today, the brand makes almost half of its sales abroad.

Other Hong Kong-listed casual fashion brands have faced uphill battles as well. Giordano International, which peaked in 2012 with net profit of HK$826 million and 2,648 shops worldwide, lost HK$175 million for the first six months of this year while cutting its store network to 2,187 by the end of June.

"Recognizing the continued challenges, the group will boldly close underperforming stores," Giordano Chairman and CEO Peter Lau Kwok-kuen said in the interim report last month. He is especially pessimistic about business prospects in Hong Kong and vowed to further downsize the operations "unless there are substantial rental reductions." "Despite our efforts to mitigate the current retail quandary, the new management does not anticipate a solid rebound in overall performance," said Victor Herrero, new chairman of Bossini.

As long as the coronavirus pandemic rages, the company likely will "continue facing strong headwinds," Herrero said. "Thus, there is currently no solid foundation for us to form an optimistic opinion about the group's performance for at least an extended period of time."

The outlook certainly does not seem optimistic for any of the major Hong Kong-listed casual fashion brands, but Tye thinks any brand could recover. For Esprit, he reckons "the whole California idea is still there," which management could expand upon and rebuild.

"Younger people are more willing to spend money," he said. "And the companies that are able to tell great stories, develop great products and a lot of innovations, young people will buy."