Neighborhood 'kirana' retailers hope to hang on to consumers post-lockdown 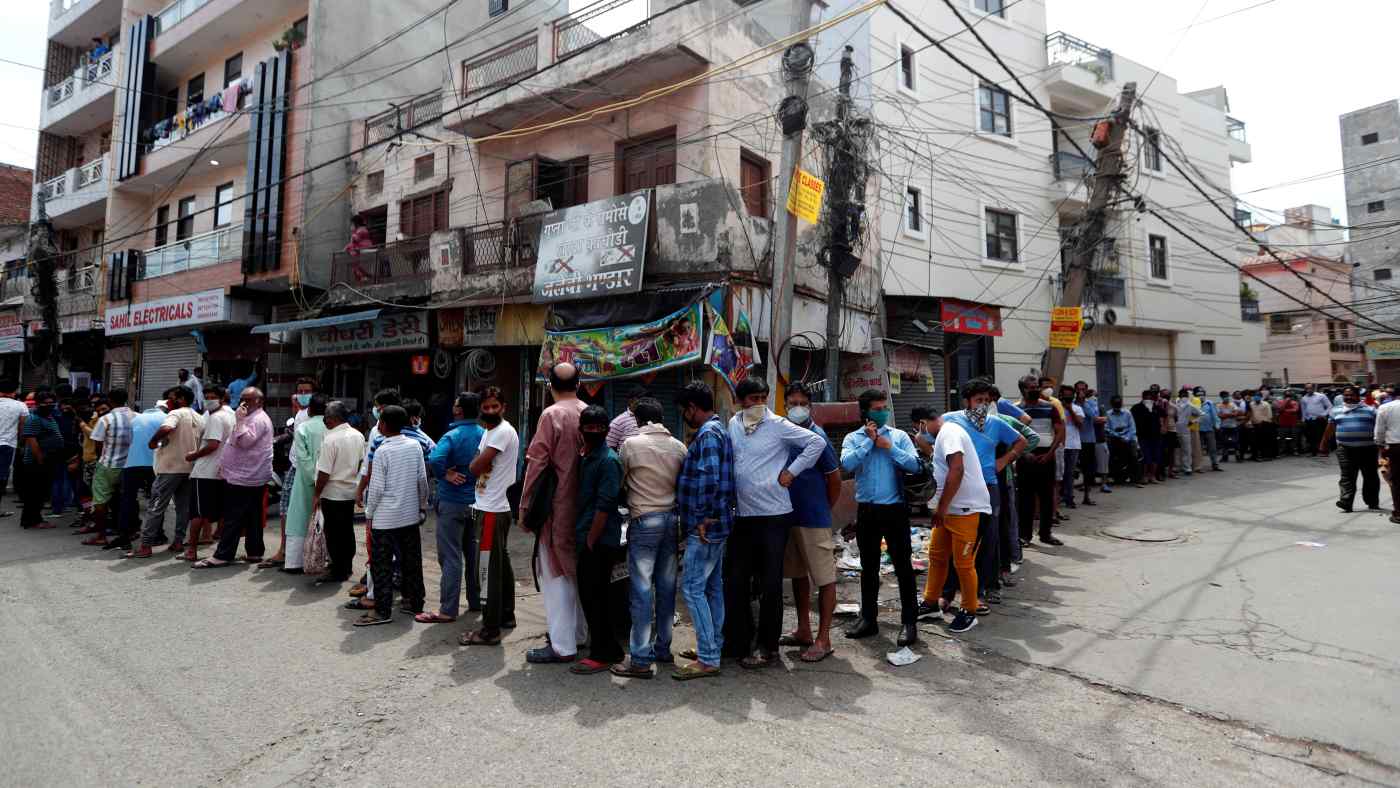 People stand in a queue to buy liquor outside a wine shop during a lockdown in New Delhi on May 4.   © Reuters
NINAD D SHETH, Contributing writerMay 14, 2020 11:53 JST | India
CopyCopied

NEW DELHI -- The Deepak Provision store in the Madhu Vihar district of India's capital city is bustling with more business than usual despite the country's stringent lockdown to slow the spread of the novel coronavirus.

As customers, all wearing face masks and careful to maintain social distance, patiently line up on the road outside, the owner orders a list of groceries be delivered by his staff to a nearby housing community as his WhatsApp account pings constantly with new orders.

India's 18 million traditional family-run neighborhood stores called kirana are pulsing with life during the lockdown. The massive country's retail nervous system, they supply a wide range of goods including food and household items such as instant noodles and laundry detergent.

Kirana stores are the go-to places for consumers as modern shopping malls remain closed and web-based delivery options such as Grofers, Amazon and Walmart-owned Flipkart have not proved nimble enough to adapt to the stringent shortage of manpower and traffic movement restrictions created by the world's largest lockdown in the South Asian country of 1.3 billion people.

Deepak Provision store also sells a diverse array of foods such as fresh vegetables, beans and eggs as well as daily necessities such as soap. Over the two months of the lockdown so far, the 110-square-meter shop's sales have increased a whopping 300%.

"The e-commerce players have a five-day delivery gap while ours is fifteen minutes," said owner Deepak Gupta. "We also offer credit for the poorer sections [of society] and all kirana stores have a storage godown nearby -- so that supplies of all major brands come in and, given that we are family-operated, our ability to home supply has been relatively unhindered."

Gupta added, "We believe that post lockdown, too, a lot of customers will not move -- especially those which preferred big format malls are unlikely to shop out that often."

Major companies are also taking a second look at the small shops as an important retail channel.

"Ubiquitous kirana stores have always played an important role in our strategy," Dilen Gandhi, senior director and category head of food business at PepsiCo India told the Nikkei Asian Review. ''In the present situation, the role of traditional stores is even more relevant. We are focused on ensuring that consumers can access their favorite food and beverages conveniently through them."

That is a boost to kirana stores, which are virtually omnipresent with about 1 establishment per 100 people according to an estimate by market research company Global Data. But their growth rate in recent years has been lagging behind modern organized retailers such as hypermarkets and e-commerce players.

According to a report on the fast-moving consumer goods market by Nielsen, sales at kirana stores grew only 6% year on year in the fourth quarter of 2019, lagging the 15% recorded for modern retailers and 55% for e-commerce. The research company earlier in 2019 reported that the share of modern retailers in FMCG sales reached 25% in India's top 17 metro areas, led by cities such as Chennai at 40% and Pune at 35%.

This year, however, is going to be different.

The coronavirus has the potential to upend big format stores, some of which have fallen into a debt crisis with no revenue due to the lockdown. Since earlier this month, Indian media began to report that cash-strapped Kishore Biyani, founding owner of BSE-listed retail major Future Group, is mulling selling a significant stake in group company Future Retail to Amazon as a way to slash debt.

In the meantime, the government of Prime Minister Narendra Modi has recently put strict new e-commerce rules in place, in part bowing to political pressure from kirana store owners. The rules bar e-commerce players from selling deeply discounted private labels that undercut the pricing power of the kirana retailers. A municipal worker in protective gear sprays disinfectant at a market in Kolkata during the lockdown.    © Reuters

The government unveiled an economic package Tuesday worth 20 trillion rupees ($265 billion), pledging support to small businesses, laborers, farmers and middle-income earners. This could give kirana stores a further boost.

The Confederation of All India Traders, an industry group representing 70 million small traders including kirana stores welcomed the announcement. "Strengthening of supply chain with upgraded technology will be the silver lining of the economic package," CAIT Secretary General Praveen Khandelwal said in a statement.

As things look up for kirana stores, a race is on big players to join hands with the traditional shops by modernizing them. Companies are pouring in technology as well as money to upgrade everything from temperature-controlled logistics and storage to digital payment options. One of the major players actively working with kirana stores is Google.

"We are growing the Indian digital footprint," a spokesperson for the U.S. tech giant told Nikkei. "On the merchant side, we have millions of merchants who use Google Pay for business to make and accept payments," the representative added. "The experience on the merchant product has been evolved to ensure that there is negligible friction in adoption and we provide an experience which is suited to the practical reality."

Google offers a video call, for example, where merchants can be verified. It also provides a feature that supports multiple phone numbers linked to a single merchant account to ensure that different family members manning the establishment at various hours of the day can take over from one another smoothly.

As electricity penetration increases across India and the mobile phone becomes central to payments -- temperature control in the supply chain and digital account settling at the point of purchase are the two key growth points.

Kirana stores look set to make steady money, at least over the near term, according to Apoorva Nema, lead analyst, APAC at Global Data. Nema reckons that disruption in buying patterns among Indian consumers during the lockdown will bring higher growth to the traditional stores at the expense of modern retailers such as hypermarkets.

"An emotional trust bond is expected to be formed between kirana stores and consumers during difficult times of lockdown," he said. "That will make these stores a preferred option for grocery purchases even after COVID-19."