Airlines and retail hit hard, but e-commerce comes out a winner 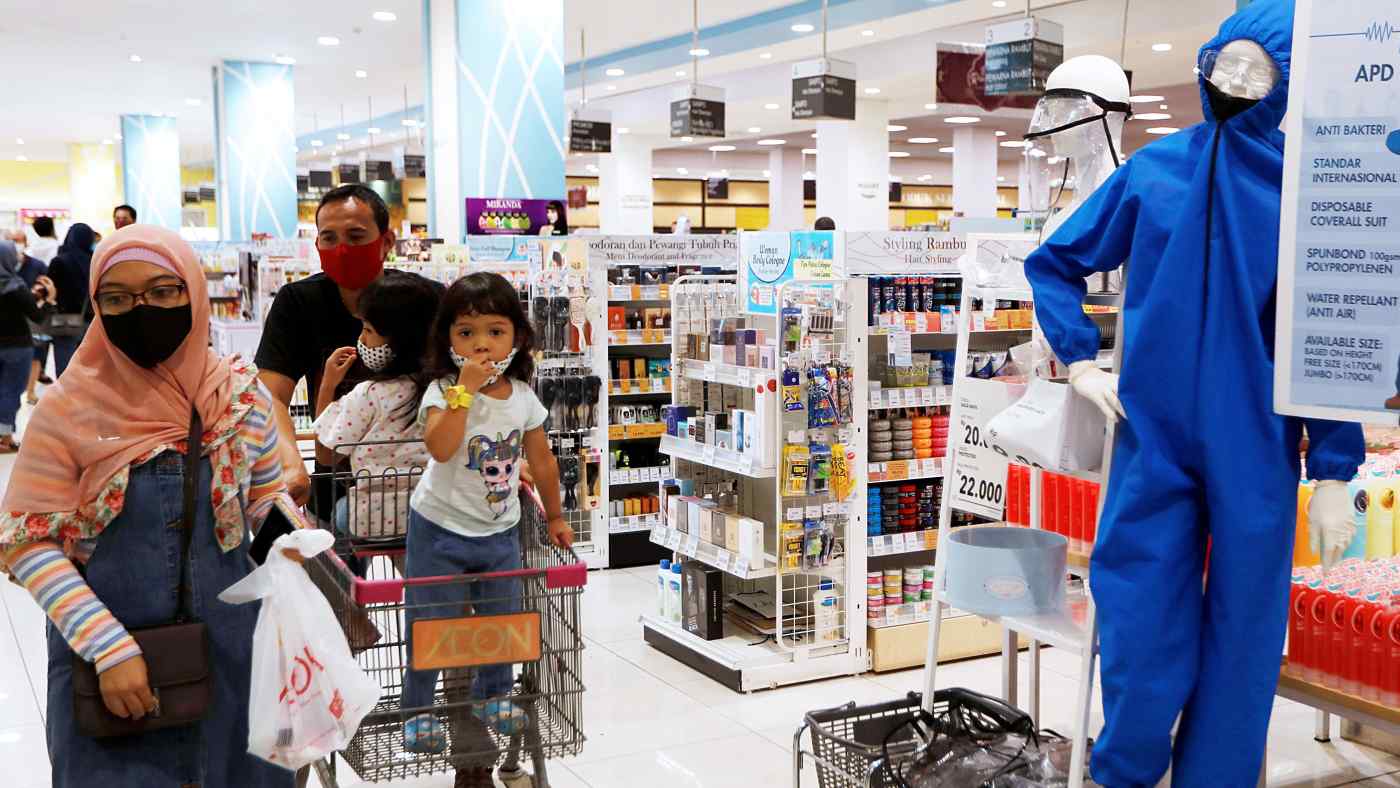 People wearing protective masks shop at a supermarket on the outskirts of Jakarta amid the coronavirus pandemic on May 26.   © Reuters
ERWIDA MAULIA, Nikkei staff writerMay 29, 2020 18:25 JST | Indonesia
CopyCopied

JAKARTA -- Ramadan is usually a bumper time of year for shopping malls in the Indonesian capital as friends meet for dinner after the daytime fast. Not this year.

The month-long religious festival, which ended on Saturday and was followed by the festival of idul fitri, or Eid, was a holiday period to forget for hard-pressed businesses. Malls in locked down cities have been shuttered while operating hours for supermarkets and drugstores have been severely curtailed.

Stefanus Ridwan, chairman of the Indonesian Shopping Mall Association, said to local media that "for the past two months the losses reached around 9.8 trillion rupiah ($680 million) for [malls] throughout Indonesia” due to partial lockdowns.

It is part of a troubled environment for many businesses in Indonesia, now one of the countries struggling to get to grips with the coronavirus pandemic. As of Friday, Indonesia had reported over 25,000 coronavirus infections -- the second-highest in Southeast Asia after Singapore -- and 1,520 deaths.

Businesses were braced for a hard time during this year's Ramadan as the government placed curbs on movement to try to beat the coronavirus crisis. In late April, the government prohibited residents of greater Jakarta from taking part in mudik, the big annual Ramadan getaway, as the area was the national epicenter of the outbreak.

A nationwide flight ban for all but essential workers was also imposed, while the holiday period was cut from five days to just one day.

As a result mudik -- when despite hugely inflated fares millions flee big cities for hometowns to celebrate the end of the fast with families -- was severely curtailed. Last year mudik involved 19.5 million people but it was a fraction of that in the period just ended.

The restrictions have all but grounded the aviation sector. Struggling national flag carrier Garuda Indonesia has seen its share price crater nearly 50% compared to a year ago.

"Due to travel restrictions, only 5% of [our] normal capacity of approximately 1,000 flights per day are operational," Indonesia's largest carrier and Garuda rival Lion Air Group said in a statement on May 20.

As a result, Lion will delay paying employees their government-mandated Eid allowance. "In order to survive the very minimum income situation, Lion Air Group is ... cutting salaries of the entire management and employees at various percentages," the company said. A passenger at nearly deserted Soekarno Hatta Airport amid the coronavirus outbreak.   © Reuters

State-owned railway Kereta Api Indonesia and bus operators have seen passengers decline since the outbreak began in early March, forcing them to suspend long-distance services. State toll operator Jasa Marga reported a combined 60% drop in outgoing car traffic from Jakarta in the week leading to Eid and incoming traffic in the two days after the holiday.

Many Indonesians had hoped that at least the next days might bring some relief for the economy.

With Jakarta scheduled for a June 4 end to the partial lockdown, 62 malls in the capital are expected to reopen the following day.  But Jakarta Gov. Anies Baswedan appeared to throw cold water on this, warning that "the lockdown might be extended if new cases don't fall as much as they should."

Private consumption, which comprises nearly 60% of Indonesia's gross domestic product, grew 2.84% year on year in the first quarter, a sharp drop from the previous quarter's 5%. A further decline is expected for the second quarter.

The lack of demand in the economy has also been felt in low upward pressure on prices. On Thursday Bank Indonesia, the central bank, forecast that monthly inflation in May would be just 0.09%. Usually prices rise more sharply during Ramadan.

In a May 26 statement, London-based consultancy T.S. Lombard forecast real GDP contracting 0.5% in 2020.

Krzysztof Halladin, an analyst with the company, says "growth has already slowed sharply in the first quarter on the back of weak domestic demand." He sees the coronavirus outbreak in Indonesia "set to last longer than in most other Asian countries," citing virus containment measures that are "less strict and came later than elsewhere," as well as poor health services.

Similar to other countries, however, Indonesia's lockdown has seen telework technology services surge along with e-commerce, which has been especially popular with those unable to buy seasonal goods at malls or who were prevented from returning to hometowns.

Local e-commerce sites such as Bukalapak -- one of Indonesia's five "unicorns", a privately-held start up with a valuation over $1 billion -- reported sales increases during the holy month.

"During Ramadan, we recorded a double-digit increase in transactions compared with last year," said Intan Wibisono, head of corporate communications at Bukalapak. She added that the most popular product categories were male and children's fashion and food items, such as dates and Eid cookies.

Another winner is Zoom. The video conference application already experienced an increase in users since Jakarta's work-from-home policy was implemented in March. And during Eid, its user base expanded to include families unable to meet in person due to the travel ban.