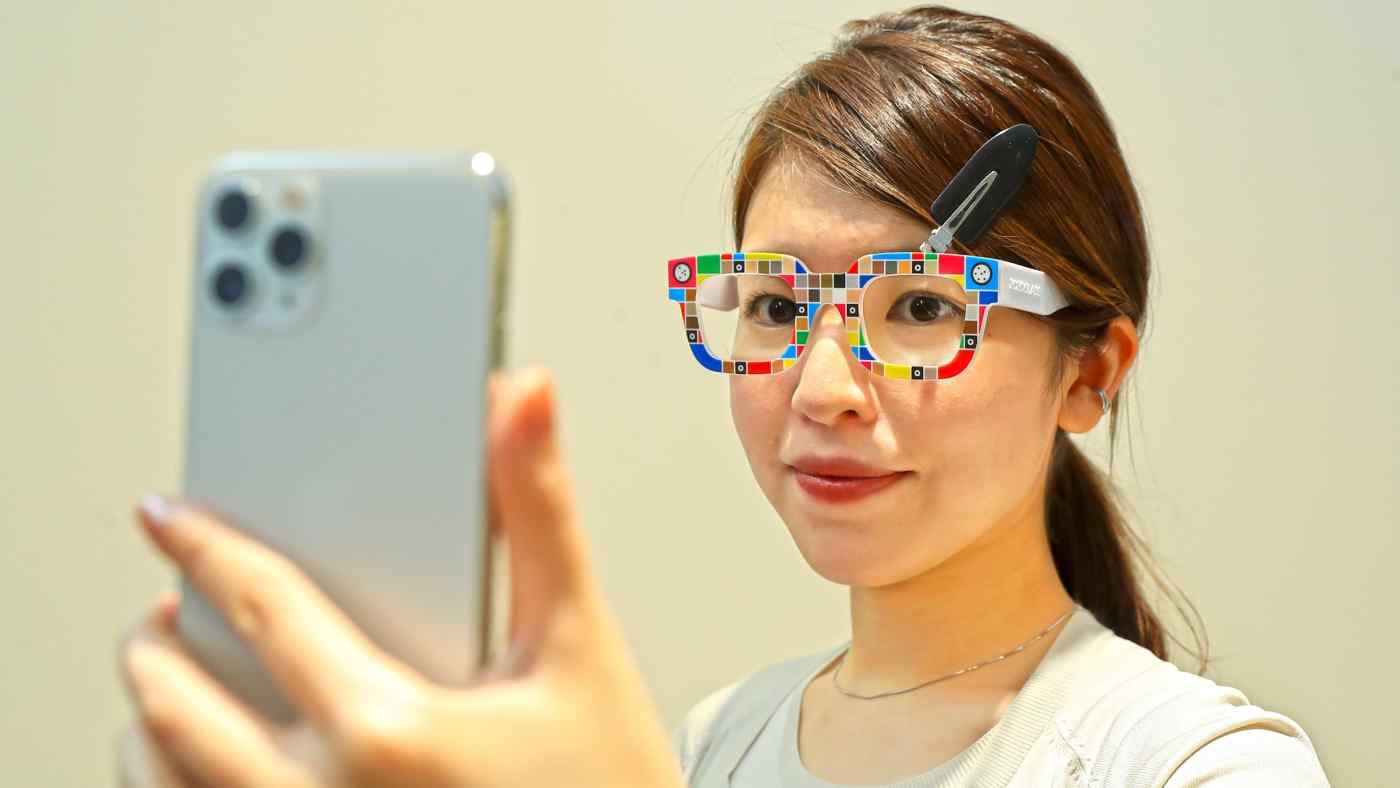 TOKYO -- Despite an ongoing slump in the apparel sector, Zozo -- operator of clothing retail website Zozotown -- is doing well, with transaction value hitting a new high for the Japanese company.

President Kotaro Sawada, who took over from charismatic founder Yusaku Maezawa, is turning the company into a rock-solid fashion platform. Instead of leaning on charm and hype, he is looking to create a sound corporate culture based on employees who are passionate about clothing.

"I'm not a charismatic manager," said Sawada, who took over from the brilliant but flawed Maezawa in September 2019. He considers himself more down to earth, "a little different" from execs who infuse personal dogma into their management style.

Until now, Maezawa's "existence itself was the management strategy." The founder was known for his unique personality and penchant for creating controversial tweetstorms. His unorthodox behavior, described by some as "mischievous" and unfettered by normal corporate conventions, was a driving force behind the company's early growth.

But did Zozo lose its edge after Maezawa stepped down? Perhaps not, as Sawada is now leading the company with words backed by action rather than charm.

Fashion tech -- with the emphasis on fashion -- is what the company now targets. The employees that remained after Maezawa left are overwhelmingly devoted to fashion. Sawada has called on the company to become the leader in fashion and technology and is devoted to long-term growth. Zozo has started using a companywide public address system to facilitate communication in 2020, in sharp contrast to previous management, during which employees often learned about Maezawa's thinking through random tweets.

Meetings have changed as well. Before Sawada took over, instructions were given to each department in a top-down way, and there was little communication among them. "Now, information is shared across the board, from management to the front lines," said Sawada.

Sawada's relationship with the companies that sell on Zozotown is also different from Maezawa's. The Zozosuit -- a bodysuit used to take full body measurements -- symbolizes this.

Launched in 2017 under Maezawa's leadership, the Zozosuit was designed for the company's in-house brands, a move that would cut into the sales of other apparel companies selling on Zozotown, leading some affected merchants to protest. 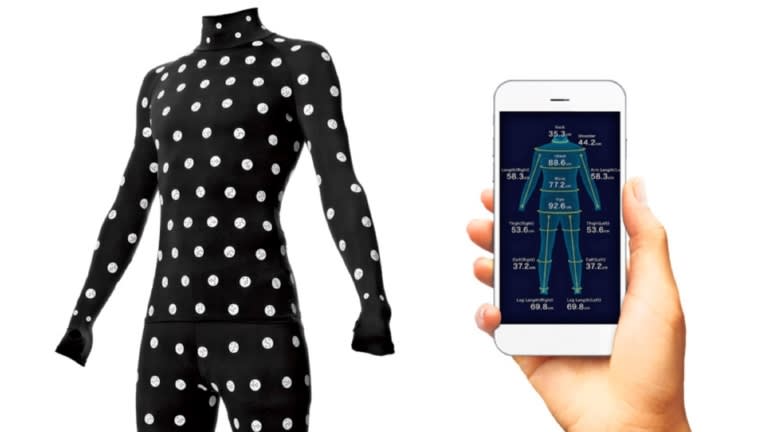 The first Zozosuit was a flop, but the measurement technology derived from the project can now be used to help merchants on Zozotown to develop clothing.

Zozosuit 2 announced in October 2020 is not only more accurate but also allows other companies to use the technology. "This is an effort to optimize inventory across the entire apparel industry," said Zozo's Hisashi Matsufuji, who leads the project. "We are where we are today because of all the twists and turns we've taken."

"We don't do everything ourselves anymore," Sawada said.

Zozosuit 2 now allows data on more than 1 million body shapes to be shared with other companies, helping them develop clothing in more sizes. The strategy is to increase efficiency both for Zozo and Zozotown's merchants by reducing the number of returns and canceled purchases due to size problems.

Zozo's revamped position in the fashion industry has helped it gain the trust of apparel companies during the pandemic. Companies that are experiencing slumping in-store sales have found Zozotown platform to be a reliable partner. In the fiscal year ended March 2021, the value of merchandise transactions increased 22% from the previous year, reaching a record high of 419.4 billion yen ($3.8 billion). "The time is coming for us to take another step up," said Sawada.

In a bid to take the company to the next level, Sawada wants to transform Zozo into a system that works seamlessly with brands in all aspects of the apparel sector --- from upstream manufacturing to downstream retail. It will not only sell products but also support manufacturers at the planning stage.

Specifically, Zozo envisions the sharing of demand forecasts collected by Zozotown, the digitization of production management, and the streamlining of material procurement and logistics arrangements through bulk ordering.

The company established a specialized business unit this year that coordinates with brands to create the necessary behind-the-scenes infrastructure. 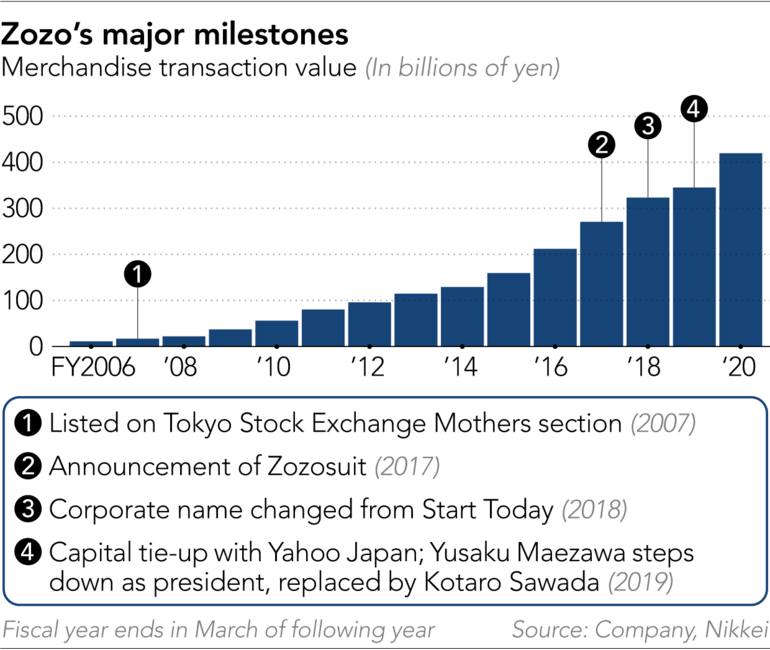 The fashion-tech seeds sown by Zozosuit have sprouted, and Zozo is now trying to grow from a clothing shopping site into a comprehensive fashion site.

In conjunction with the March launch of its specialized cosmetics mall, Zozocosme, Zozo began distributing free Zozoglass -- an eyeglass-looking device that measures skin tone. Users open the Zozotown app on their smartphone and take a picture of their face while wearing the Zozoglass to have skin features analyzed. The system then recommends products from Zozotown, such as foundation and other cosmetics based on skin type.

The expertise gained from developing the Zozosuit was used to create the new skin care tech. One can see the Zozosuit's distinctive white dots attached to the Zozoglass. "This wouldn't have taken shape if we didn't have the experience with the Zozosuit," said Takayasu Yamada, head of the company's imagination strategy office, which is in charge of new businesses.

Customers have put in more than 1 million orders for Zozoglass. Demand from consumers buying cosmetics at home during the pandemic seems to be driving the purchases. "I can quickly find a color that blends well with my skin, rather than trying many products at a cosmetics store," said a woman in her thirties. Others have commented that it was easier to find suitable products. 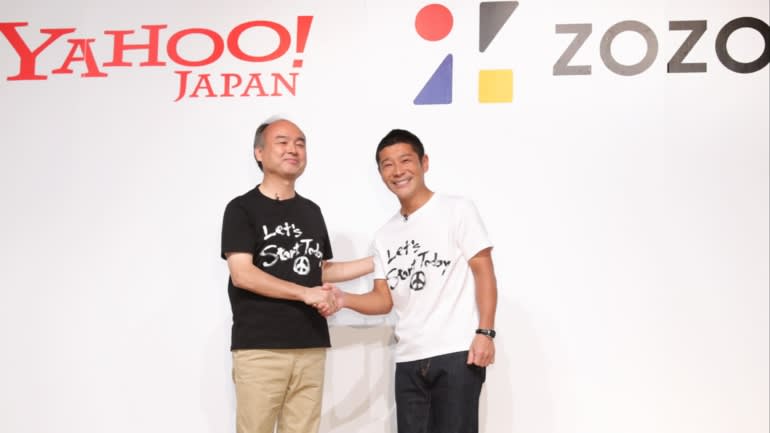 Zozo founder Yusaku Maezawa, right, shakes hands with SoftBank Group Chairman and CEO Masayoshi Son at the announcement of a tie-up with Yahoo Japan in 2019.

For sizing and choosing footwear, Zozomat, which launched in February 2020, reached more than 1 million users in three months. Users place their foot on Zozomat and photograph it from multiple angles with a smartphone, with the shape of their foot converted into three-dimensional data.

Artificial intelligence technology can then make individualized recommendations. "I sometimes feel bad for store staff when I try on three or four pairs of shoes," said Yamada. "Now it's easier for people living in rural areas to buy from stores in Tokyo, even without coming in to try on the products."

Zozomat for measuring hand, wrist and finger sizes is also on the horizon, with the aim to boost sales of jewelry. About 86% of Zozotown annual users are active members -- people who purchase at least once per year -- in the fiscal year ended March 2021. Many users register when requesting a measurement device, which seems to lead to continued use and sales.

Zozo plans to start exporting its measurement technology overseas by the end of 2021. In addition to fashion, the company envisions a wide range of applications, including health care, diet-related services and games.

"We still have many unique ideas," said Yamada. "We'd like to move forward with our overseas goals as well."