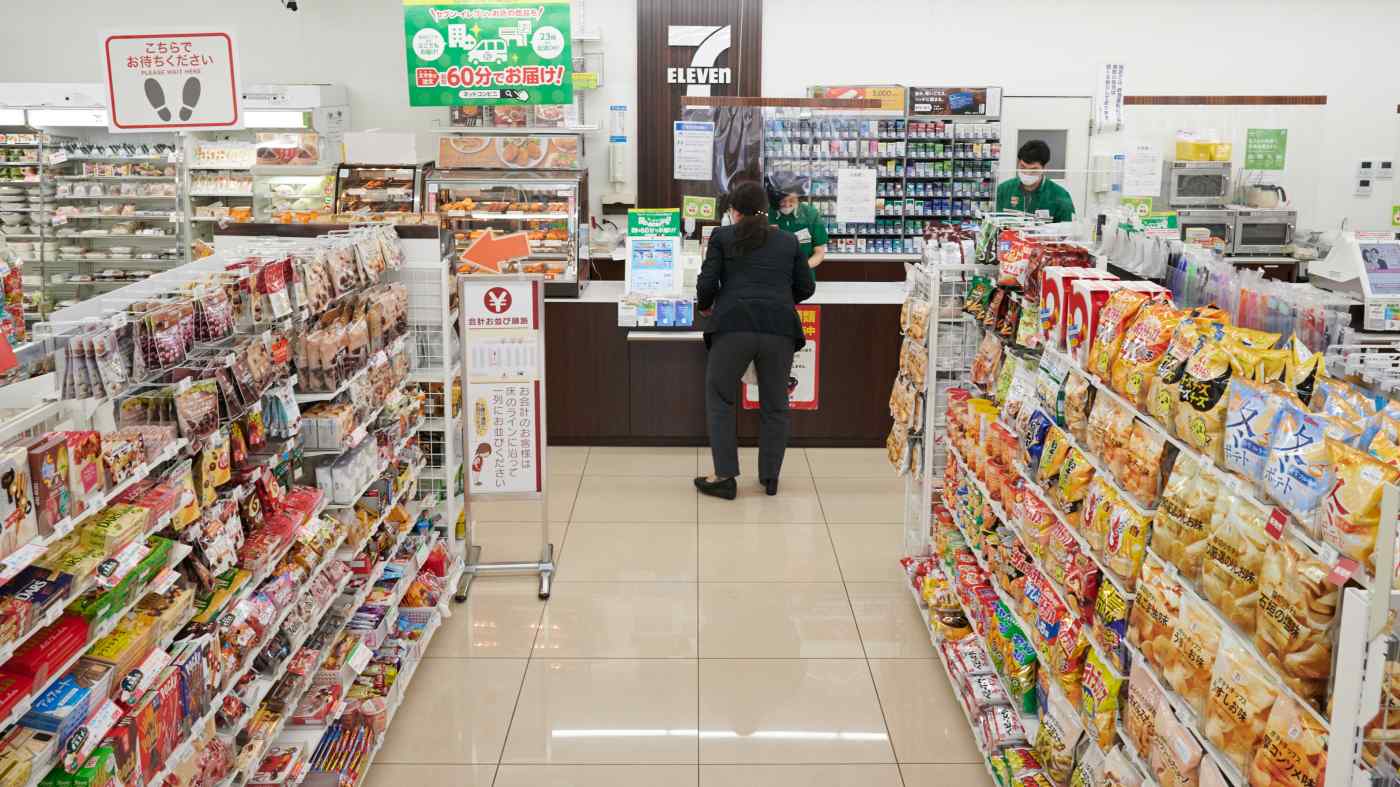 Although the latest decree, which continues to widen over more of Japan, is less drastic, convenience and other stores are expected to suffer as more people heed the government's call to work from home.

"As for the outlook for the full year, the situation is expected to remain unpredictable," Seven and i Holdings said in a statement released on Tuesday. The convenience store pioneer announced a downward revision of its full-year revenue forecast for the fiscal year through next month.

It now expects revenue of 5.71 trillion yen ($55.1 billion), down 0.7% from its previous forecast, reflecting the current COVID situation in which new cases are rapidly multiplying and the country's residents are growing more inclined to hunker down. Revenue will be down 14% compared to the previous fiscal year.

Japan has been experiencing an explosion of COVID-19 infections. Daily new cases hit a record high of over 7,800 in early January, and the government decided on Jan. 7 to declare a second state of emergency for Tokyo and its three neighboring prefectures. The first decree came in early April and lasted for less than two months.

On Wednesday, the government decided to also put the greater Osaka area under the decree, which is expected to further expand to cover Aichi, Gifu, Fukuoka and Tochigi prefectures.

As the state of emergency widens and government-led campaigns to encourage people to travel and dine out wane, some retailers worry that their streams of customers will slow.

"Taking into consideration that infections are again spreading, and the central and local governments are urging people to stay home, we have determined that it will take a long time for sales to recover," convenience chain Poplar said in a statement issued on Tuesday. According to its full-year forecast announced the same day, it expects a net loss of 1.2 billion yen for its fiscal year through February.

Since the current state of emergency differs from the decree last spring, retailers are divided on how much they will be impacted.

Masamichi Adachi, UBS Securities Chief Economist for Japan, says this time "the area and businesses that are affected are limited so that the damage to the economy is likely to be smaller."

To mitigate the economic toll, the government this time narrowed much of its focus to restaurants and bars, and has not asked stores to close like it did in the spring. This came as a huge relief to many operators.

Some companies expect a limited impact. "The difference between the first state of emergency and second is that we don't have to close stores this time," Satoru Matsuzaki, president of Ryohin Keikaku, the operator of the Muji lifestyle chain, told reporters last week during an earnings conference.

The company is maintaining its full-year earnings forecast, which points to a record-high profit. Matsuzaki explained that his company had to close two-thirds of all domestic stores when Japan declared the first state of emergency. However, this time stores can remain open until 8 p.m.

Ryohin Keikaku on Friday reported a consolidated net profit of 12.2 billion yen, up 69%, for the September-November quarter, supported by growing domestic sales of food and clothes. "We will continue closely monitoring the situation of the state of emergency," Matsuzaki said.

Convenience store operator Lawson has not changed its forecast of 670 billion yen for the fiscal year through February, which would mark an 8% fall. The company on Friday reported an operating profit of 15.6 billion yen for the September-November quarter, up 2% from the year-earlier period, partly due to brisk sales of "Demon Slayer" tie-in products.

Japan's convenience stores are staying open 24 hours a day despite the state of emergency. However, as food accounts for over 70% of their sales, it is likely that the latest restrictions, which also call on more people to work from home, will impact sales if workers heed the request.

Retailers say consumers are reacting differently this time. "There has not been any chaos or panic buying as we saw during the previous state of emergency," said a representative of Seven and i Holdings, which also operates Ito Yokado supermarkets. "Customers are staying very calm."

Ahead of the April-May state of emergency, consumers flooded into stores to bulk-purchase food and dairy necessities. Rice, instant noodles, sanitary items and toilet paper quickly disappeared from shelves.

The company is maintaining normal operations at its 7-Eleven convenience stores but is closing tenant retailers and restaurants in its Ito Yokado general merchandise stores at 8 p.m. in areas under the decree.

"Given that the new state of emergency focuses on restaurants, we expect a limited impact," said a representative of Aeon, Japan's top retailer. Aeon on Wednesday announced an operating profit of 68.1 billion yen for the March-November period, down 33.9% from the year-earlier period.

But some analysts say the state of emergency will slow customer traffic, which was brisk in October and November thanks to promotional campaigns.

Takahiro Kazahaya, a retail analyst at Credit Suisse Securities, warned that uncertainty regarding the virus's spread remains. "Depending on the infection situation of the COVID-19 variant, it is likely that the restrictions will be tightened," Kazahaya said. "As uncertainty cannot be alleviated, you can never underestimate the impact."