TOKYO -- Aeon, Japan's biggest retail group by revenue, will change leaders for the first time in 23 years, with a member of the founding family stepping aside as the company struggles to break into e-commerce.

The transition comes as Aeon, confronted by online rivals like Amazon.com, faces earnings pressure to shift from a business strategy centered on expanding its store network.

"Aeon has grown very large, so we have been missing more business opportunities because we cannot make up our minds and take the final step," Okada told reporters in Chiba, near Tokyo.

Yoshida "has a track record in handling projects that require huge investments," said the 68-year-old Okada, who will become chairman with representative rights.

Much has changed at Aeon, which traces its history back to a samurai-era garment merchant in Mie Prefecture started by the Okada family.

Motoya Okada took over as president from his father at the age of 45 in 1997. Acquisitions and shopping mall openings have swelled the company under a strategy that sought competitiveness through size. 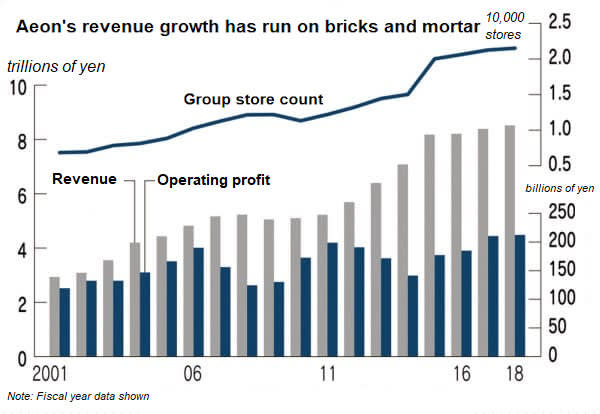 Yet despite the rise of e-commerce, online business accounts for only about 1% of Aeon's roughly 8.5 trillion yen ($77.6 billion) in annual revenue -- far below the roughly 6% average for all of Japanese retail.

"Our digital transformation has not succeeded at all," Okada acknowledged, and he said he felt "embarrassed" for having stayed on so long as president.

Yoshida played a key role in Aeon's expansion strategy. He was involved in planning and opening new stores both in Japan and overseas, particularly in China. As the current head of Aeon Mall, he leads a unit key to Aeon's real estate business, which generates nearly 40% of the group's profits.

Yoshida had been seen as the top contender to succeed Okada. But the expectations riding on the new president will no longer be met simply by growing the real estate business.

Amazon, Japan's Rakuten and other e-commerce players have eaten away at Aeon's mall sales and are making inroads into groceries, a threat to the group's supermarket segment. Size does not necessarily equate to strength in this changing business environment.

"A gap has emerged between our valued customers and the products and services at the places where we provide them," Yoshida said in the news conference.

Although he has led Aeon's digital business since March 2019, Yoshida's background shows little depth of experience in e-commerce. Overseas, big retail groups have often tapped outside talent to lead their digital transformations.

Walmart, the world's biggest retailer, has acquired e-commerce companies in its home market of the U.S. and abroad -- notably India's Flipkart -- to scale up its presence beyond physical stores against fierce competition from Amazon.

Aeon has made some moves on this front. It set up a digital business unit in China last April, and in November announced a partnership with Ocado, the U.K.'s biggest online supermarket, from which it aims to glean e-commerce know-how.

But the emphasis on scale as a determining factor in survival remains deeply embedded in Aeon's organization, espoused by the likes of Okada's aunt Chizuko Kojima. Aeon may eventually face painful decisions on restructuring its brick-and-mortar businesses.

Yoshida said Aeon "will put to use the strength of having a real-world presence, while speeding up the integration with our online business."

Okada said that he will remain involved in setting the group's "long-term strategy" but that "almost all authority will naturally be handed over to the new president."