Lawson tests next step of convenience store evolution in China China, which serves as a sandbox for Lawson to test out new innovations, will assume an increasingly prominent role in sustaining the company's growth for the next generation amid a slowdown in Japan.

Lawson has about 3,000 stores in China, or about triple the number three and a half years ago. The size of the operation puts it in the lead among foreign-owned convenience store chains and in fifth place overall.

Lawson has been fielding requests from local government authorities to open locations. The company's store count in China is all but guaranteed to surpass the roughly 14,000 outlets in Japan.

The Tokyo-based company first entered China in 1996. It used to directly manage most of the outlets, but has actively signed franchise contracts since 2014. Major local retailers signed on to the arrangement.

Lawson stores in China sell products that have become hits in Japan, such as Akuma No Onigiri rice balls or its brand of Basque-style cheesecake. The fact that Lawson differentiates itself from its Chinese competitors has led to growth in franchise contracts. 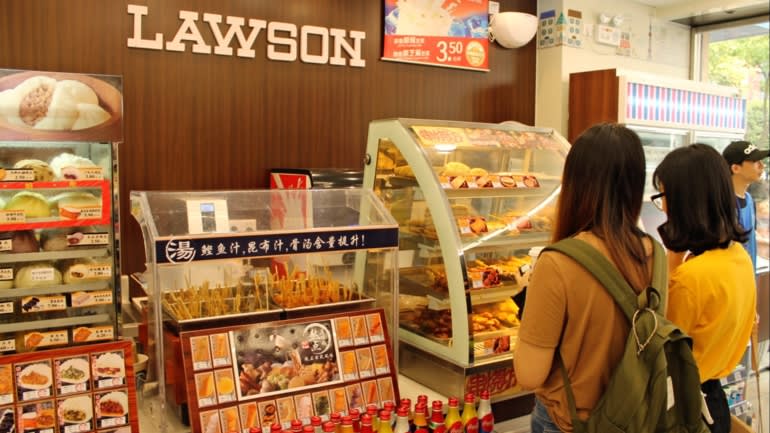 By offering products popular at its Japanese locations, Lawson sets itself apart from Chinese competitors. (Photo by Naoki Matsuda)

Scale is not the only way Lawson is making an impact in China. Since 2016, the chain has offered 24-hour delivery in which convenience stores serve as depots. The service makes use of drivers at Ele.me, a food delivery platform under Chinese e-commerce leader Alibaba Group Holding, and at Meituan, a rival backed by tech giant Tencent Holdings.

A mobile phone order can reach a customer within 30 minutes. The Lawson app gives customers immediate access to stores' inventory data so they can check product availability.

The delivery service is available at all of Lawson's Chinese minimarts. The operation accounts for 15% of sales in Chongqing, a key Lawson market, and 10% in other Chinese cities.

Lawson imported the service back to Japan in August last year. This time, the chain partnered with Uber Eats drivers, with more than 1,000 stores offering deliveries.

The company did the same with mobile checkout technology, trying it first in China before bringing it to Japan. The tech lets users pay for items by scanning product bar codes with their smartphones. This way there is no standing in line for a human cashier. As of September, 117 Japanese locations had adopted it.

At first, there were fears that the innovation would lead to shoplifting, but there have been virtually no problems in China since the tech was rolled out in 2017.

Lawson's business strategy in China is a step ahead in terms of store openings as well. The company has employed the services of AutoNavi, Alibaba's mapping unit, to analyze location data, incomes and other personal data in a prospective new operating area.

"For example, we know how many people in an income bracket congregated in the vicinity of a store during the noon hour yesterday," said Motonobu Miyake, the CEO of Lawson (China) Holdings.

The data gathering is able to accurately predict daily sales, which lends to efficient store openings. In Japan, such market data is largely limited to the twice-a-decade census, which can create discrepancies between projections and actual customer traffic. Lawson started using location data for some Japanese stores this month.

Some of Lawson's Chinese competitors are further ahead in the technology game. Bianlifeng, founded in 2016, made its name with freshly made dishes and cashier-free stores. Customers pay for items with QR codes and other cashless options while staff takes care of cooking and sales promotion.

"They take advantage of cashier-free registers by having store clerks perform high-added-value work," said an industry insider. Bianlifeng has grown into a formidable rival with 1,500 outlets in 20 cities.

Lawson took in 5.3 billion yuan ($790 million) in revenue from its Chinese stores last fiscal year, amounting to only 3% of group sales, excluding some regions and operations. Still, that represents four times the sales level of four years prior. The Chinese business is on track to post its first operating profit this fiscal year after a string of losses.

Once Lawson reaches 10,000 locations, the Chinese operation "can potentially earn an annual operating profit of over 10 billion yen ($95 million)," said a Lawson executive.

Back home, Lawson is facing a saturated market. The convenience store count in Japan shrank for the first time last year. The industry is also grappling with a shortage of workers.

For Lawson, China has served as a laboratory of sorts due to its digital innovations and relaxed regulations. Now the region is turning into a crucial segment on the earnings front as well.

But a larger presence in China brings the potential for increased exposure to political and diplomatic fallout. Japanese retailers Aeon and Fast Retailing had to shut down Chinese stores in the wake of the backlash over Japan's nationalization of the Senkaku Islands in 2012. China claims the islands and calls them the Diaoyu.

Back then Lawson's presence in China was too inconspicuous to feel any blowback, but an expanded chain carries more risks.

"We will continue operations in a way that is acceptable to local consumers," said a Lawson representative.