BANGKOK -- Tourists are being given a brand-new choice for last-minute shopping before they leave Thailand, once the government starts to loosen the country's borders that were tightened due to the novel coronavirus pandemic.

Siam Piwat owns large shopping malls such as Iconsiam, Siam Paragon and Siam Discovery in the central Bangkok area. An outlet mall is a new addition to their portfolio.

When the two sides announced their partnership in June 2018, they were planning a 10 billion baht ($322 million) investment in three outlet malls. The joint venture invested 4 billion baht in Siam Premium Outlets Bangkok, which is the parternship's first completed project. 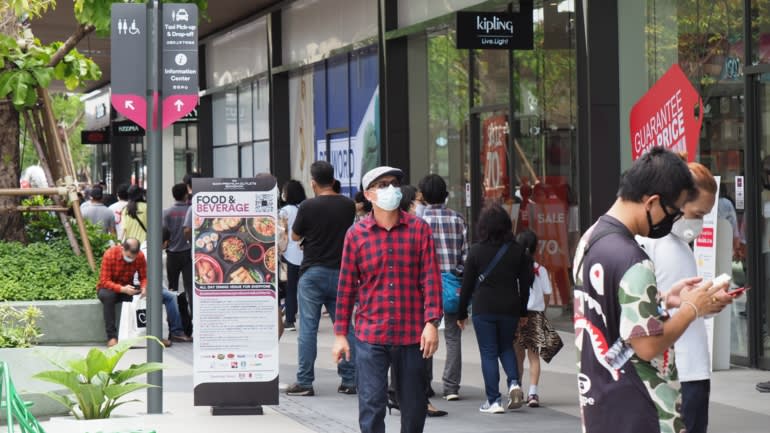 The area surrounding Suvarnabhumi Airport has become a battleground for Thai retailers. (Photo by Masayuki Yuda)

"Siam Premium Outlets Bangkok will be an economic driver for the Thai economy. The center will create over 1,000 career opportunities," said Michael Tang, managing director of Siam Piwat Simon. "The experience of the center extends beyond shopping, with amenities and design features that make the center an exciting community space and a relaxing shopping destination," he added.

The new mall will come into close competition with Central Village, an outlet mall that was opened by another leading Thai retail group, Central Pattana, in August 2019. As the last stop to shop for tourists leaving Thailand, it will also compete with King Power, which is the sole operator of duty-free shops at Suvarnabhumi Airport.

The new outlet mall was originally scheduled to open in October 2019. Because of the delay, the opening has coincided with a lack of tourists in the country due to the COVID-19 travel restrictions.

Thailand has seen its tourist inflow virtually halted, as the Civil Aviation Authority of Thailand has a landing ban imposed for all international passenger flights except for those carrying repatriated Thais.

Tang said the mall expected its customer breakdown for the time being to be 80% Thais and 20% non-Thais, including expats in the kingdom. When tourists start coming back in, he would aim to have 60% Thais and 40% non-Thais.

At the opening, 65% of the mall's tenants were starting operations. The joint venture looks to bring the number up to 70% by the end of the month, and 80% by the end of the year. Tenants include the luxury brands Burberry and Balenciaga, and internationally known sports brands Nike, Adidas and North Face.