Asics had hoped to make great strides against Nike in 2020, only to see its plans upended by the pandemic. (Photo by Mariko Saito)
MARIKO SAITO, Nikkei staff writerApril 24, 2020 09:11 JST | Japan
CopyCopied

OSAKA -- Asics had anticipated a banner year in the run-up to what would have been this summer's Olympic Games in Tokyo, planning to release its first carbon-plated shoe in Japan on April 17 in a direct challenge to its chief competitor, Nike.

But like a torn Achilles tendon, the coronavirus outbreak put a halt to those plans -- forcing the company's stores to shut and the games to be postponed. Yet some investors are betting on a dramatic comeback by the time the Olympics are held in 2021.

The carbon-plated Metaracer is designed to put more spring in a runner's step. Although Asics' online shopping portal is still up, the company insists on launching the shoe at brick-and-mortar locations.

Asics learned a bitter lesson in the U.S., where it lost momentum after doubling annual sales there over the five years through 2015.

It was caught flat-footed by shifts toward athleisure and e-commerce. It logged a 20.3 billion yen ($188 million) net loss for 2018, much of it stemming from structural reorganization costs.

"We were held captive by our past successes, so we were late to respond to changes in sales channels and among consumers," President Yasuhito Hirota has said. 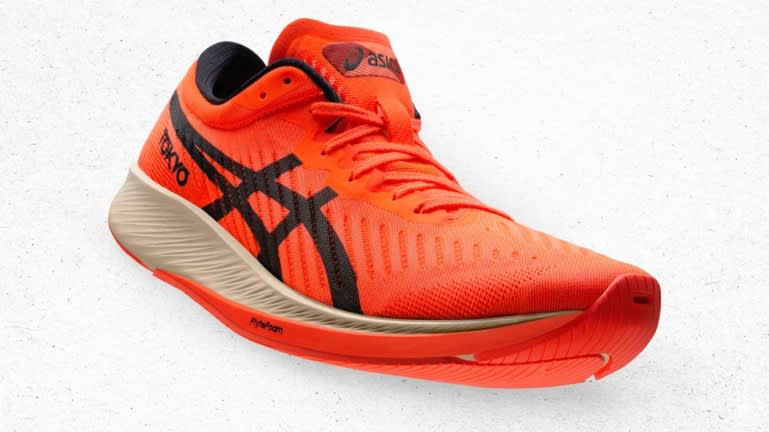 To turn operations around, Hirota renewed the company's focus on running-shoe specialty stores. Unlike Asics' 110 North American stores, they also sell other brands. But their knowledgeable clerks can talk up its shoes, helping to avert a cheapening of the brand, the thinking goes.

The gambit has apparently paid off. Although Asics does not release these figures in detail, it says North American sales through the so-called run specialty channel have increased by double digits.

Asics signed on as a Gold Partner for the Tokyo Olympics, the highest level of corporate sponsorship. It sought to boost its name recognition through the event and grab U.S. market share from Nike and Adidas.

But with the games delayed, operating profit is seen falling 52% to 5.1 billion yen this year in a QUICK Consensus survey of analysts. Asics warned of a 15% contraction on Feb. 14.

Stay-at-home orders have caused the global economy to stagnate. Asics' share price now languishes at roughly half of the 1,802 yen year-to-date peak touched in January as an intraday high.

"With incomes in a wholesale decline, money will be hard-pressed to circulate to sports products, since they are viewed as a type of luxury item," said Tatsunori Kawai of au Kabucom Securities.

Now the focus is on "how far [Asics] will regain lost ground in running shoes by leveraging next year's Olympics," a source at a Japanese brokerage said. If the Tokyo games do not come to pass, no bounce is expected for the stock.

But Asics has at least one believer. British investment house Marathon Asset Management has raised its stake to above 5%, according to documentation filed Monday.

Marathon "was already a major investor that owned about 8.5 million shares, and this time it added a million more shares," an Asics representative said. "The relationship has lasted since the first interview in 2018."

Though Marathon is pinning the stock buy on Metaracer sparking an eventual triumph over Nike, it remains a long-term investor at heart. If the new shoe fails to draw buyers in the U.S., Asics will remain laps behind.