TOKYO -- Japan's Fast Retailing, which operates the Uniqlo chain, said Thursday it expects its earnings to hit a record high in the fiscal year ending in August 2021, after the coronavirus pandemic dragged down numbers this year.

The company expects its net profit to surge by 82% year-on-year to a historical high of 165 billion yen ($1.57 billion) in the year ending in August, surpassing a previous high of 162 billion yen in fiscal 2019.

It expects sales to reach 2.2 trillion yen in the fiscal year ending next August, just below the peak of 2.29 trillion yen achieved in fiscal 2019.

For the year ended this past August, net profit tumbled by 44% to 90 billion yen, while sales fell by 12% to 2 trillion yen. The sales figure was slightly higher than a previous forecast of 1.99 trillion yen, due to better-than-expected recoveries in Japan and China.

While Fast Retailing still expects the overall rebound to be slow until February as the impact of the COVID-19 pandemic continued to be felt, it expects a sales surge in the second half of fiscal 2021. It still plans to open 40 new stores annually in Southeast Asia, India and the Oceania region, Director Takeshi Okazaki said.

Uniqlo pointed to the greater China region, in particular, where it expects revenue and profit to expand throughout the fiscal year. It sees e-commerce sales growing by double digits in the mainland, Hong Kong and Taiwan. The outlook for Japan is also healthy, as it expects same-store sales to rise by 4% by August.

"As time changes, lifestyle changes so do customer demands," said Tadashi Yanai, chairman, president and chief executive of Fast Retailing at a press conference on Thursday. "In order to face the current situation, we must change.

"We work on digital transformation in order to immediately reflect changes in customer demands and to create products."

He added that product development and processes would be digitized, and "digital, robotics and automation" would be key in all parts of its supply chain. 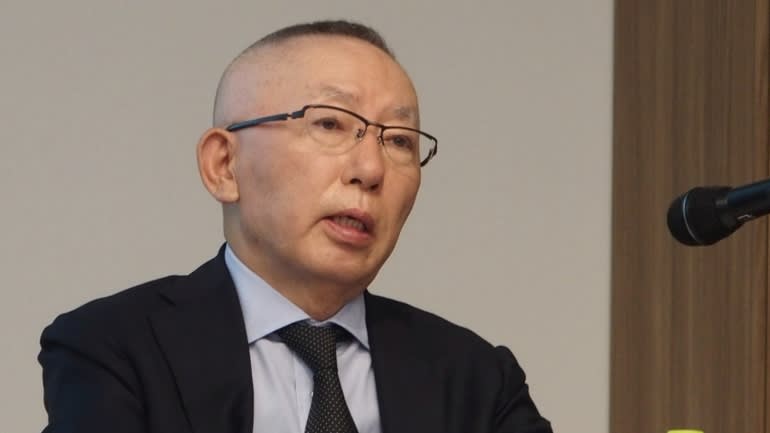 Tadashi Yanai, chairman and president of Fast Retailing, expressed confidence in the company's China business, at a press conference on Thursday. (Photo by Akane Okutsu)

As for the growth prospect in China, Yanai restated his vision that "it is feasible to open 3,000 stores just in China." The country is Uniqlo's second biggest market where it now operates about 780 stores.

Uniqlo's basic clothing has been well positioned in the pandemic, compared with its global rivals such as Zara and H&M, which are known to be quick at reacting to runway trends.

According to latest disclosures, Sweden's Hennes & Mauritz, which operates H&M, said sales declined by 21% between December 2019 and August 2020, while Spain's Zara parent Inditex reported that sales tumbled by 37% between February and July.