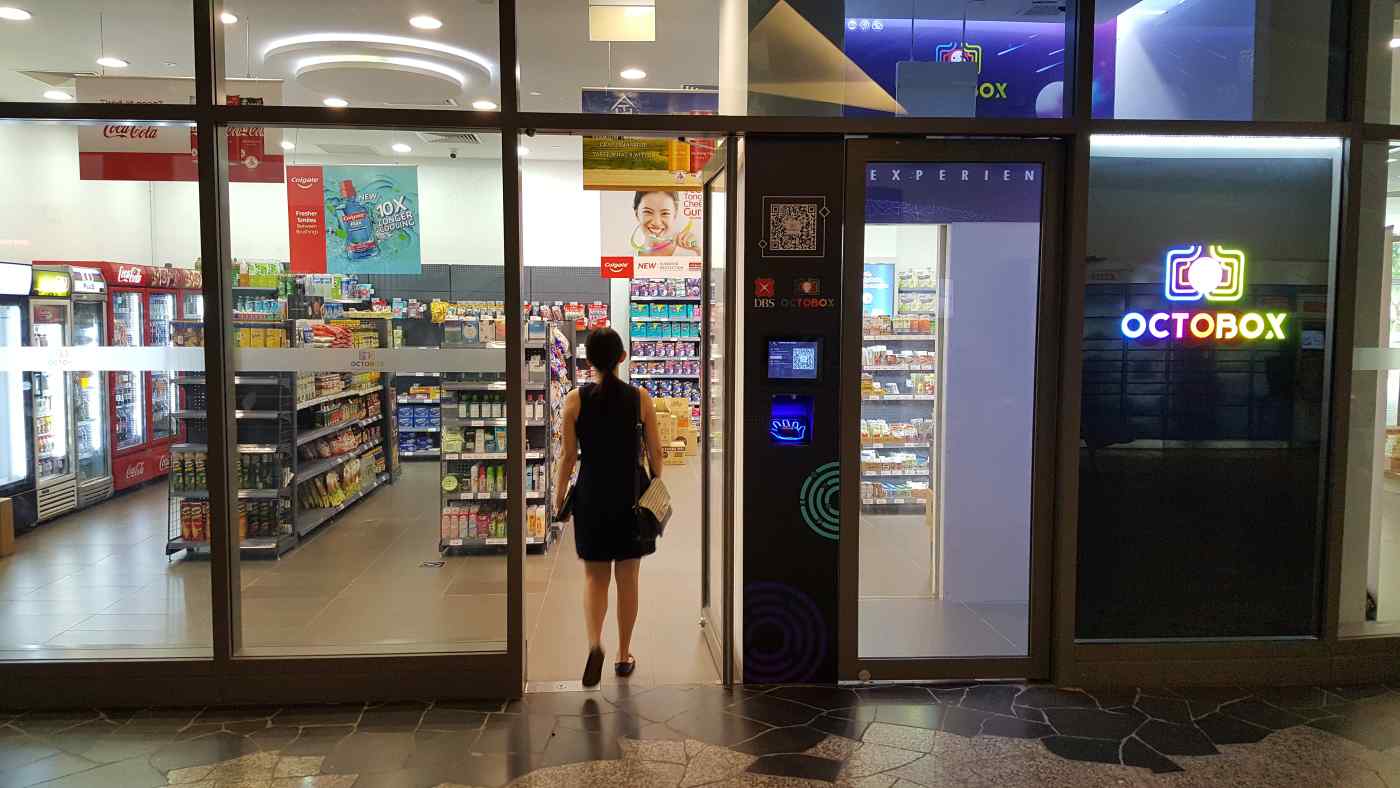 SINGAPORE -- Computer science undergraduate Shawn Hong surveyed a chiller stuffed with sodas at a convenience store located within the grounds of the National University of Singapore.

Deciding on a healthier option, Hong, 24, picked up a bottle of sugar-free green tea and headed to the cashier, which in this case was an electronic display built into a wall.

The flagship unmanned store for Singapore start-up Octobox, which opened in August, Hong scanned his palm and completed the entire transaction without having to interact with any people.

"This is very convenient for students like us," Hong told the Nikkei Asian Review. "Especially if you want to go downstairs to buy stuff in the middle of the night."

Young and digitally-savvy, Hong is exactly the kind of consumer Octobox is targeting as it eyes expansion into Malaysia, Taiwan and Indonesia where the company is hoping to open up to 10 more unmanned stores next year.

"This is the way that we can be sustainable for a longer period of time," said Ng, adding that it costs around US$108,000 to set up each store.

Ng said that within three weeks of the store's opening on campus, 3,000 students had registered their customer profiles, which includes a scan of their palm tagged to their mobile phone number.

Octobox plans to open up to four more unmanned outlets in Singapore, employing the same strategy of targeting small communities such as popular gyms and private residential enclaves. Singapore retailer Octobox is betting that consumers such as 24-year-old computer science student Shawn Hong will drive the growth of unmanned stories in the city-state. (Photo by Dylan Loh)

Unmanned stores present significant appeal to retailers in Singapore, where manpower is in short supply shortages and labor costs are rising.

Other local retailers to embrace the unmanned store concept include local convenience store chain Cheers, which launched its first automated retail outlet at a vocational college in 2017, as well as OMO Store and Pick and Go.

State backing for automated retail has aided in the growth of unmanned stores in Singapore, where government agencies such as Enterprise Singapore can contribute up to 70% of the technology costs required to set up an unmanned store.

"There is a role for unmanned stores to play in certain product categories, in certain customer experiences," said Alan Yeo, director for retail and design at Enterprise Singapore.

Singapore's unmanned retailers say they are being careful not to repeat the mistakes that led to the failure of unmanned stores in other markets. A recent boom in unmanned stores in China ended almost as quickly as it began after the stores struggled to move fresh groceries. Pick and Go chose the Singapore University of Technology and Design for the launch of its unmanned store in October. (Pick and Go)

One drawback of the system there, he said, was that the stores required multiple layers of verification before customers could complete their purchases -- ironically making the so-called convenience stores less convenient to use.

"The customer wants things to be fast," said Toh. "So that's why the first thing we tested (at the OMO Store) was to go without any verification steps."

He added that the customer experience in an automated retail environments was being closely watched, with adjustments being made, if necessary, to help shoppers enjoy a hassle-free time.

According to global technology analysis company ABI Research, full-scale automated retail stores worldwide will grow exponentially from fewer than 500 this year to more than 44,000 by 2023.

Still, for Singapore at least, unmanned stores may take a while longer to catch on.

"Such a business model is not viable yet, at least for the near term," said Su Lian Jye, principal analyst at ABI Research, adding that for the concept to really catch on in Singapore, major retailers would have to get behind it.