SEOUL -- South Korean e-commerce giant Coupang is facing a potential consumer boycott after a logistics center warehouse blaze left a firefighter dead, the latest in a series of unflattering incidents for a company that wants to make itself indispensable to shoppers.

Coupang's customers, which it estimates to number about 15 million, are drawn to features like its Rocket Delivery service, which promises same-day or overnight arrival. Demand for its services ballooned as more people shopped from home during the COVID-19 pandemic. The company, which raised $4.6 billion from its U.S. listing in March, is planning four new logistics centers that it says will create 9,500 jobs and is eyeing overseas markets such as Japan.

But the fire and perceptions of poor working conditions at Coupang's distribution centers have drawn attention to the darker side of its success, similar to the scrutiny received by U.S. e-commerce behemoth Amazon, which lists its "top priority" as employee health and safety.

The massive blaze that started on June 17 broke out at a six-level structure with a total floor area of more than 127,000 sq. meters in Icheon, a satellite city south of Seoul. It took emergency response workers several days to extinguish the fire. One firefighter, 52-year-old Kim Dong-shik, was trapped in the building and later found dead.

As firefighters worked day and night to bring the inferno under control, thousands of posts went up from users who claimed to have deleted their Coupang accounts under a hashtag that translates as "Leave Coupang." Many of the posts accused the company of forcing workers to toil like machines in its warehouses.

Opposition lawmaker Kim Yong-pan, a member of the Public Administration and Security Committee in the National Assembly, South Korea's legislature, released a statement calling the fire "a sad event that shows negligence of safety is still prevalent in our society."

An editorial in the JoongAng Ilbo newspaper criticized Coupang for what it called poor working conditions and lax safety standards at its warehouses. "Regardless of how innovative a company is, it can't survive if it loses customers' faith," the center-right newspaper said. "Coupang now ought to establish a corporate culture that respects humans and befits an innovative global company."

Coupang apologized earlier this year after a government commission found the death by cardiac arrest of employee Jang Dug-joon, 27, was related to his physically onerous work in a warehouse. Just this month, delivery drivers went on strike demanding better conditions. A tentative deal was reached, whereby the company agreed to hire workers to sort packages in September and to cap drivers' hours at 60 a week. 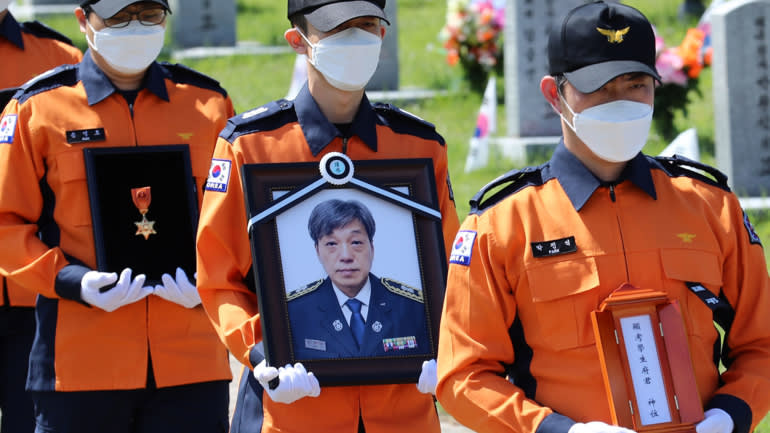 A funeral procession carries the mortuary tablet and portrait of firefighter Kim Dong-shik, who died in a blaze that tore through a Coupang warehouse in Icheon on June 17.   © EPA/Jiji

The company also faced public ire in May of last year in connection with an outbreak of COVID-19 at one of its warehouses. The government faulted Coupang of failing to enforce rules to prevent virus transmission, such as ensuring that workers maintained proper social distancing.

Police have not yet announced the cause of the fire and Coupang denies its warehouses are unsafe, telling Nikkei Asia in a statement that authorities confirmed no unaddressed fire hazards and that its workers were quickly evacuated and none were harmed.

In a public statement on Sunday, the company expressed condolences over the death of the firefighter Kim, promised to support his family, pledged to assist firefighters in getting treatment for injuries battling the blaze and vowed to establish a scholarship in his name for the children of firefighters who die on duty. It also said it had hired hundreds of safety experts and invested more than 250 billion won in workplace safety.

Amid fallout over the warehouse blaze, Coupang has simultaneously been forced to fend off allegations related to the recent resignation of founder Kim Bom-suk, who stepped down from all positions at the group's South Korean unit to focus on the international segment.

News of Kim's resignation became public during the fire uproar, leading some to suspect he stepped aside to evade responsibility, possibly due to a South Korean law that can hold CEOs liable for workplace disasters.

Coupang, however, responded that his decision was unrelated to the fire, saying he quit in May. The change, however, was only made public on a government website around the time of the fire. That, Coupang said, led to "inaccurate reports about the resignation."

While frustration with the company is real, it is unclear how damaging the recent run of bad publicity will prove to Coupang's bottom line.

The fire and attendant bad press have had no discernible impact on Coupang's standing in the eyes of investors, its shares were trading at $38.17 on the New York Stock Exchange on Thursday, slightly down from the day before the blaze.

"The movement against Coupang will last for a while, but won't go on forever," Im Il, a professor at Yonsei University School of Business in Seoul, told Nikkei. "They are likely to lose a lot of customers at this moment, but in e-commerce customers are very sensitive to price, so if Coupang can offer cheaper service, some of those customers will eventually come back."

Im added that to help that happen the company also sorely needs to repair its image.

"First they need to make a sincere apology," Im said, while longer term, they need to improve working conditions at warehouses, such as lessening the burden on workers through automation.

"But if they do that, their costs will go up and they'd have to raise their prices," he said. "This is a common dilemma of all companies in this brutally competitive industry."