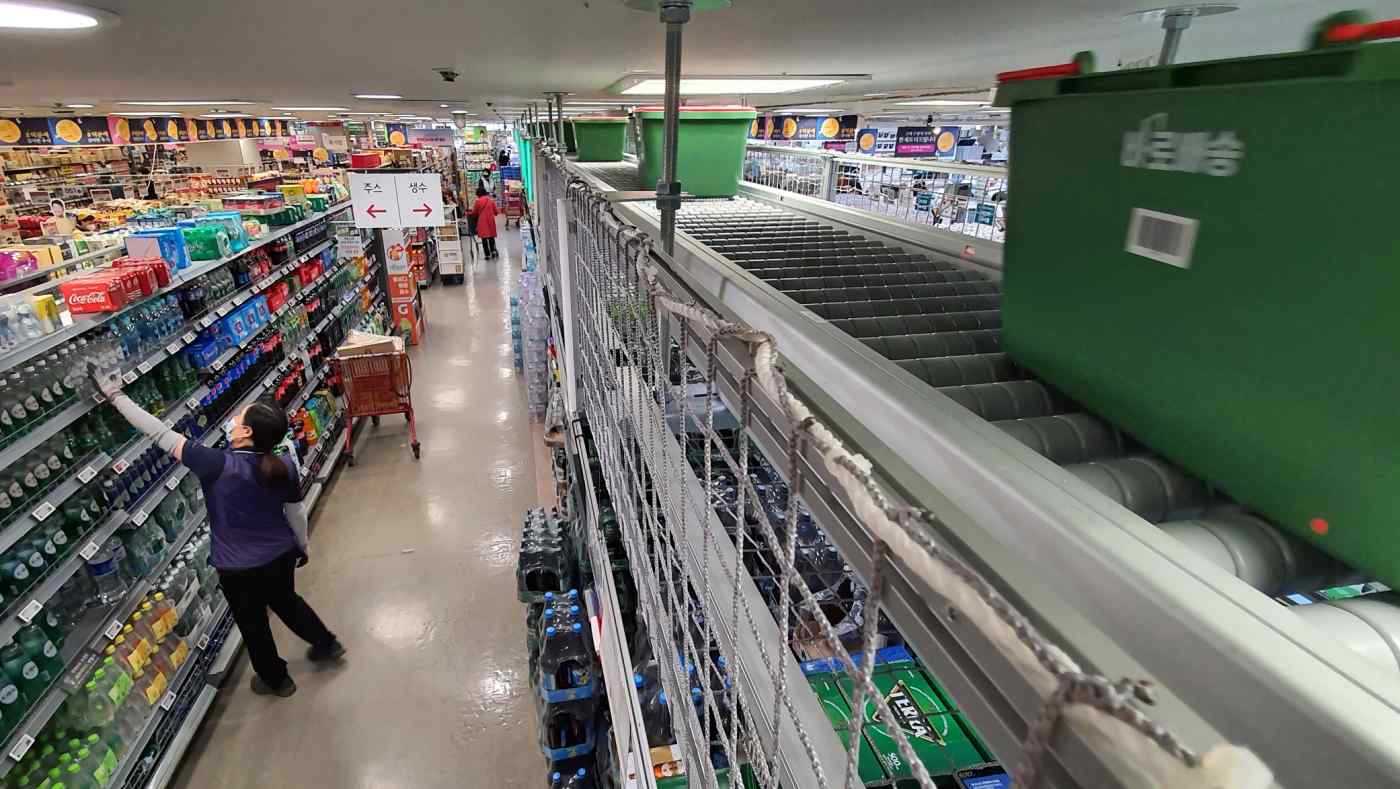 SEOUL -- Lotte, a major South Korean conglomerate, is betting on new services such as e-commerce as a way to compete against challengers in the sector as it struggles to rebuild its core retail business.

While closing 20% of its stores under direct management, Lotte is also seeking to attract consumers with delivery of online-ordered merchandise from supermarkets to customers within two hours. And it will make use of data on 40 million consumers in the country as a groupwide competitive strategy.

Lotte Mart Junggye in Nowon, a residential district of 550,000 people in the northeastern part of Seoul, has been converted into a "half-store, half-distribution base" as an experimental online supermarket under a slogan of delivery within two hours after an order is placed. That pledge covers an area running 10 kilometers to the north and south and 5km to the east and west.

Workers there put ordered items in shopping baskets and place them in one of four small elevators on a floor of around 10,000 square meters. The baskets are pulled up close to the ceiling and brought to the shipping location on a conveyor.

For shipment, products are sorted outside at the back of the store in an area that used to be a trash collection site. Bulky items are then loaded on delivery trucks.

As a result of the conversion, the number of orders received by the store has increased to 1,000 per day from 400 and it plans to further increase the total to 1,300 by the end of the year.

"We have attracted customers in their 20s and 30s, while the number of visitors has not decreased," said Kwon Young-Dae, the store's deputy manager responsible for the online supermarket business. And the online supermarket "is fully contributing to earnings because its break-even point is 700 to 800 orders per day," Kwon said.

Encouraged by the successful experiment, Lotte will open another such store in the southern city of Busan later this year to pave the way for a multi-store operation.

Retail is Lotte's core, contributing more than 30% of groupwide revenue, but its earnings are in the doldrums.

Lotte Shopping, a major distributor with sales channels including department stores and large discount stores, posted an operating profit of 430 billion won ($380.32 million) in the business year ended in December 2019, down 64% from five years earlier, showing that the business was slumping even before the start of the coronavirus pandemic.

Lotte has been pushing restructuring, such as closing 200 stores, or 20% of the total under direct management, but the retail business is still showing few signs of improvement.

The biggest headache is the rapid growth of e-commerce operators such as Coupang, partly owned by Japan's SoftBank Group and called "South Korea's Amazon.com." Operating 170 distribution centers across the country, Coupang is sharply boosting revenue, though incurring a deficit of around 1 trillion won ($955.93 million) annually.

To counter such competition, Lotte in April launched "Lotte On," an app integrating e-commerce services for its supermarkets, department stores, home appliance retailers, drugstores and other operations. Centrally managing and analyzing sales data on 70 million items, the app works out product lineups and recommends those based on each customer's preference.

The two-hour delivery by supermarkets is effective in luring shoppers of perishable food and other products by taking advantage of the presence of physical stores.

For selection of goods and prices, Lotte is in a superior position than e-commerce companies. An internet search in mid-October found onions available for 15,900 won per 10 kilograms at Lotte, compared to 19,400 won at Coupang.

But Coupang is rapidly catching up, promoting a quick delivery service, named "Rocket Fresh," for some 8,500 kinds of fresh food and other produce. In addition to the "early morning" delivery of products ordered the day before, it has launched a "same day" delivery service ensuring that goods, ordered before 10 a.m. are delivered by 6 p.m. on the same day.

Lotte is short on delivery capacity in comparison to e-commerce companies, said Park Chong-tae, an analyst at Hana Financial Investment, as physical stores are mainly located close to consumers. In other words, there are cases in which they are located too far way from expressways and so are inconvenient as distribution bases.

To operate the two-hour delivery service from online supermarkets across South Korea, Lotte will have to increase distribution centers customized for the service.

Lotte's effort comes as retailers around the world are seeking to expand online supermarket operations. Walmart of the U.S. has improved its counteroffensive against Amazon by repeatedly testing delivery and pickup services from physical stores.

Hema Fresh, a food supermarket belonging to Chinese e-commerce giant Alibaba Group, is operating a service delivering fresh food products in 30 minutes to customers within a radius of 3km from a store.

Although Aeon and other retailers are also starting e-commerce services in Japan, their ratio to total services remains low. Lotte's attempt is expected to arouse interest from Japanese retailers trying to figure out how best to utilize physical stores for e-commerce.

Lotte Group's sales totaled 74.5 trillion won in 2019, spelling a decline of around 10 trillion won from five years earlier. And now this year the group's hotels and duty-free shops are being hit by the COVID-19 pandemic.

Reduced earnings in the retail business, which has generated cash for investment in overseas operations, chemicals and other non-retail sectors, are casting a shadow over the entire group.

External factors are also having an adverse impact as well. Lotte has been forced to cut back on operations in China as a result of a diplomatic dispute between Beijing and Seoul, while the chemical business is suffering from weakened demand for petrochemical products.

In sum, Lotte's core business has undeniably lost leeway to fend off such an unfavorable overall environment.

"Change everything from Lotte's past," Shin Dong-bin, chairman of Lotte Group, stressed in a rare in-house message in January. It was reminiscent of a famous 1993 pep talk by Lee Kun-hee, the former chairman of Samsung Electronics who died last month. Lee had urged employees to "change everything but your wife and children" during his drive to transform Samsung into an innovative company.

Shin's message reflects his acute sense of crisis about Lotte's failure so far to achieve a turnaround from revenue and profit declines.