BANGKOK -- Thailand's retail-to-hospitality conglomerate Central Group is set to open a shopping mall near Bangkok's main international airport on Aug. 31 despite opposition from the airport's state-owned operator, Airports of Thailand.

The Central Village luxury outlet mall is meant to be the last stop for free-spending tourists on their way out of the country. But for now it is a battleground where the retail group's property development arm, Central Pattana, is facing off against the operator.

The mall is only about one kilometer from Suvarnabhumi International Airport. The 40,000-sq.-meter facility will host 150 tenants, including international luxury brands such as Polo Ralph Lauren, Coach and Salvatore Ferragamo.

"[Central Pattana] has been preparing for over five years to attract global brands, which have showed enough confidence to invest in our country," said the developer's president and CEO Preecha Ekkunagul.

Over 1,000 people will be employed at the mall, which cost 5 billion baht ($160 million) to build and is expected to generate annual sales of about 30 billion baht, according to Preecha.

"About 70% of the shops will be doing business on opening day, with the remainder opening their doors within two to three months," Preecha added.

Central Group is a retail giant headquartered in the Mekong region, and is currently run by the founder's grandson, Tos Chirathivat. The group, established in 1947, mainly engages in retail and property development but has diversified into brand management, hospitality and food services.

According to its website, it has about 3,700 branches and locations, and occupies 7 million sq. meters of commercial space.

However, the grand opening of its newest mall is not going exactly according to plan.

Since Aug. 22, a group of people associated with Airports of Thailand has blocked entry to the mall's parking lots, first using a booth and cars then eventually erecting a barricade. A sign near the mall bearing the AoT logo states: "This area is owned by AoT. Trespassers may be prosecuted."

The obstacles have hindered tenants' preparation for the Saturday opening, forcing them to unload their wares on a road adjacent to the mall and haul them manually to shops via an entrance for pedestrians. 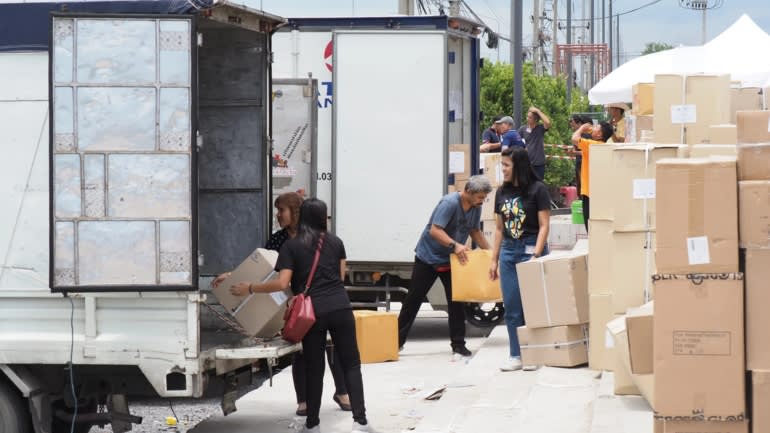 Tenants of the new mall are being forced to unload their products at the pedestrian entrance. (Photo by Masayuki Yuda)

AoT justifies its action by claiming that the land on which the mall sits is under its jurisdiction. The president of the state-owned operator, Nitinai Sirismatthakan, reportedly said on Aug. 23 that the mall could cause congestion on roads leading to the airport, and that its lighting could confuse pilots trying to land.

On Thursday, Nitinai added that the commercial site could cause increased bird strikes on planes using the airport. He is also worried about smoke obscuring runways in case of fire, citing an April blaze at one of Central Pattana's megamalls that killed two people.

The operator has protested to relevant government agencies, accusing Central Pattana of lacking proper authorization for construction of the mall and its water services.

Central Pattana issued a rebuttal on Wednesday, saying that it followed proper procedures and is in compliance with the regulations of all relevant government agencies. The developer also posted a sign at the mall stating: "This project is located next to a highway. It does not infringe upon any property rights."

The company petitioned the Administrative Court for an injunction against AoT's activities. "We also have a backup plan to solve the issue," Preecha said, without offering details.

The CEO feels that the impasse will be resolved in favor of the mall. "Central Village believes that action will be taken to promote fair and justified competition," Preecha said. On Friday, the court ordered AoT to clear up the blockage. As of 5 p.m. local time, the airport operator had not commented on the ruling.

Preecha's words underscored the real reason for AoT's opposition: that the new mall will poach customers from the airport's duty-free shops, all of which are run by store operator King Power. AoT is believed to be a major benefactor of King Power's monopoly.

Despite heavy criticism from the retail industry, AoT recently extended King Power's monopoly for another 10 years without fully disclosing the reasons for its decision. 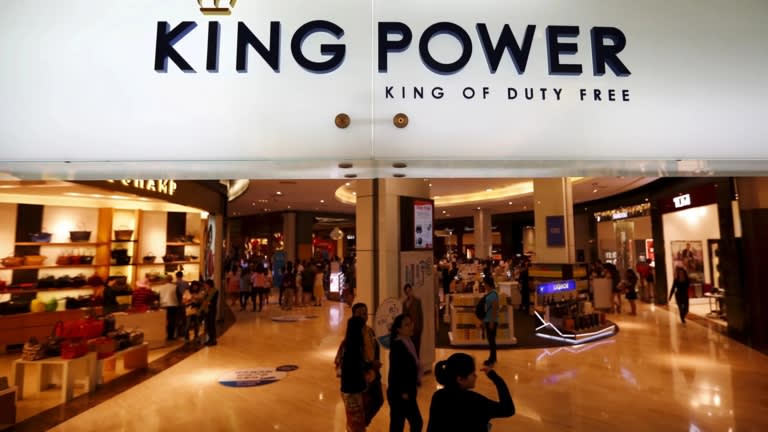 AoT and King Power are riding high on Thailand's booming tourist industry. Foreign visitors reached a record 38.27 million in 2018, up 7.5% from the previous year. AoT hopes to further cash in on the trend with plans to expand airports to handle over 100 million visitors annually in the future.

The operator reported total revenue of 60.5 billion baht for the year ending Sept. 30, 2018, marking 10% year-on-year growth. Currently, 56% of revenue comes from aeronautical services, with the remainder from other services such as duty-free concessions. AoT wants to increase the non-aeronautical proportion to above 50%.

Its dominant position in the industry has proved attractive to investors, who have made it the second-largest company in Thailand by market capitalization.

But AoT's grip over airport operations that it shares with King Power has prevented Thailand from fully benefiting from the deep pockets of duty-free shoppers. Deunden Nikomborirak, research director at Thailand Development Research Institute, cited data that showed the average duty-free expenditure in Thailand at $47 per passenger, compared with $260 at South Korea's Incheon International Airport, which has 12 companies running duty-free operations.

Luxury malls and duty-free shops are distinct businesses, but compete head to head if they both target tourists about to leave the country. Central Village has likely annoyed AoT because duty-fee shops at the airport will soon face real competition.

"This luxury outlet will help generate more income within the country from taxes," said CEO Preecha in a not-so-subtle jab at the monopolistic practices at the airport.

AoT is under the Ministry of Transport, currently headed by Saksayam Chidchob of the Bhumjaithai Party. It is the second-largest listed company in Thailand by market capitalization. King Power is a major backer of the political party, which is part of the country's ruling coalition.

On Thursday, Deputy Prime Minister Wissanu Kreangam said Central Pattana can proceed with the planned mall opening at its own risk without having to wait for an injunction from the court.

Central Pattana, AoT and other stakeholders will meet on Friday, hoping for an early resolution to the issue.