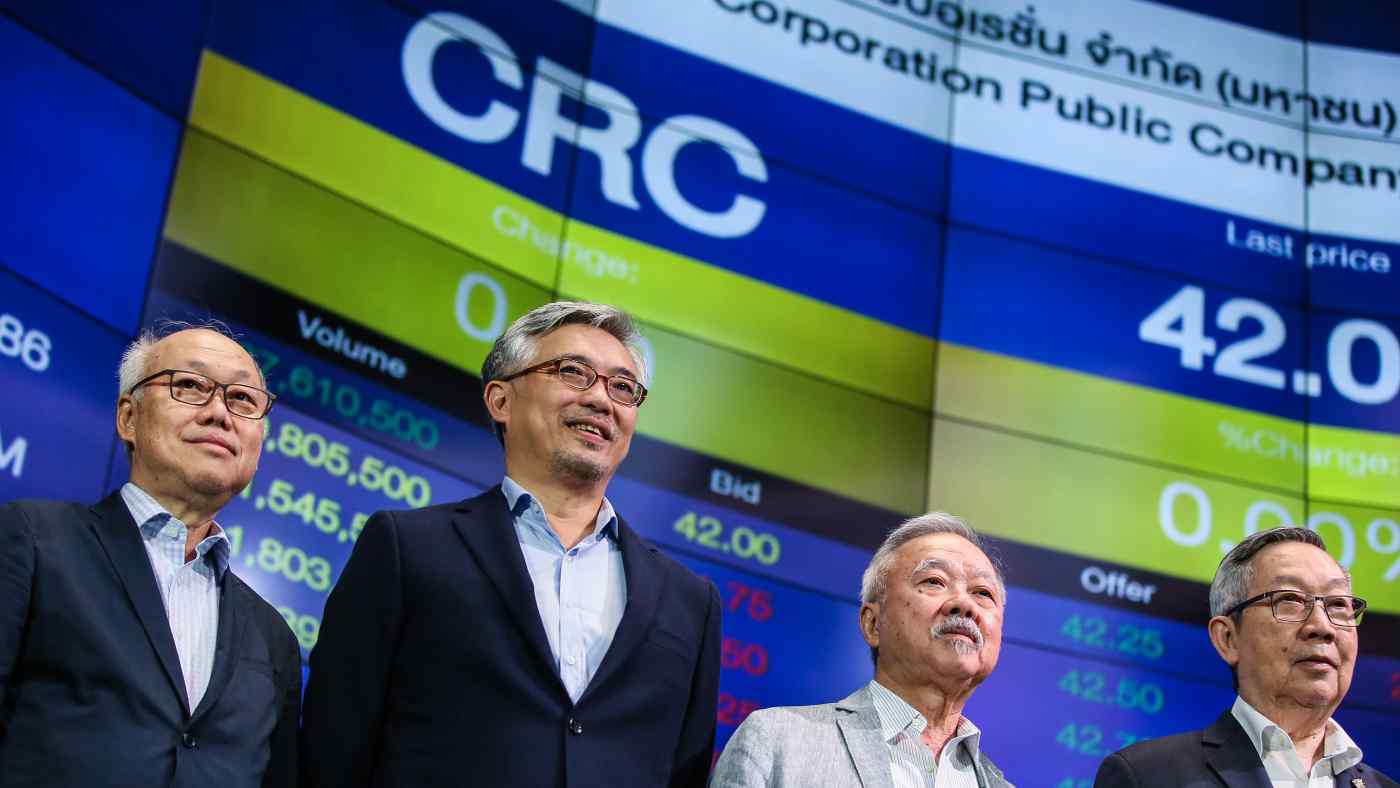 "Our focus is to expand our business in Thailand and Vietnam," Central Retail CEO Yol Phokasub told the Nikkei Asian Review on Thursday in an exclusive interview after the company's debut on the Stock Exchange of Thailand.

After opening at 42 baht, shares in the department store fluctuated between 41.5 and 42.25 baht in the morning. The issue ended morning trade flat at 42 baht, unchanged from the initial public offering price.

At that price Central Retail's market cap comes to 253.3 billion baht ($8.1 billion), making it the 13th-largest company on the exchange, between Central's mall-development arm, Central Pattana and the food-processing unit of another family-owned conglomerate, Charoen Pokphand Group, Charoen Pokphand Foods.

Central Group is controlled by the Chirathivat family, the country's second-richest, and is led by Tos Chirathivat, the group's executive Chairman and CEO and grandson of the founder. Central Retail CEO Yol Phokasub speaks during an interview with the Nikkei Asian Review in Bangkok. (Photo by Akira Kodaka)

The retail conglomerate has grown around its department store business. As of last September, Central Retail operated 1,922 stores in Thailand, 133 in Vietnam, and nine in Italy. Apart from department stores, it runs a wide range of specialty shops, including sellers of sporting goods, home appliances and electronics. It also owns supermarkets and convenience stores.

In Thailand's retailing industry, Central Group's is seen as a potential buyer of British supermarket chain Tesco Lotus' local operations. "I am aware of the [media] reports," Yol said, but he declined to comment further, calling it "a sensitive topic."

Central Retail's IPO raised 78.1 billion baht, the country's largest ever. The prospectus suggested the proceeds will be used to expand and renovate its domestic and international store networks.

Central Retail has been solidifying its presence in Europe and Southeast Asia through acquisitions. Its first large international purchase came in 2011, when it bought Italian luxury department store chain Rinascente for 205 million euros ($221 million).

"If we think they fit our business after transformation, we will consider adding them to our portfolio," said Yol. He revealed that Central Retail has a call option to buy the European department store chains. Central Retail aims to cement its dominance by broadening its networks. The retailer has an omnichannel strategy that uses branches to showcase and store goods. "We have to expand online and offline in order to succeed," Yol said.

The luxury retail business in Thailand faces headwinds from falling tourist numbers due to the outbreak of the new coronavirus known as COVID-19. In particular, stores have seen a sharp decline in Chinese tourists, who account for a large part Central Retail's business.

"If [the epidemic] ends in the short term tourism will be impacted but if it lasts for a longer period wider industries will be affected," Yol said, voicing concern over the effects of the coronavirus on the economy and consumption. "Yet, we are mitigating the impact through our online channel as we already see an increase in online orders of daily goods, such as groceries and cosmetics."