CP All operated about 12,000 7-Eleven stores in Thailand as of June, making the company a clear leader in the industry. (Photo by Akira Kodaka)
APORNRATH PHOONPHONGPHIPHAT, Nikkei staff writerAugust 31, 2020 18:20 JST | Laos
CopyCopied

CP All's newly-incorporated Lao subsidiary CP All Laos on Friday entered into a master franchise agreement with Texas-based 7-Eleven, a wholly-owned subsidiary of Seven-Eleven Japan, to operate the convenience store chain in Laos for 30 years.

"The two parties may agree to extend by two additional 20-year terms," CP All's chief financial officer Kriengchai Boonpoapichart said in a statement. The first 7-Eleven outlet in Laos is expected to open in the country's capital Vientiane in 2022, Seven-Eleven Japan said in a statement on Monday.

The move follows CP All's announcement in May regarding the introduction of the convenience store chain to Cambodia in 2021 as its first overseas entry, an indication of its strategy to expand its retail business in fast-growing neighboring countries in the Association of Southeast Asian Nations region.

Laos will be the 20th country and region in which the 7-Eleven store chain is to operate. CP All already runs about 12,000 7-Eleven stores in Thailand and has an overwhelming position in the convenience store industry in the kingdom.

"With its remarkable success in Thailand, I can think of no one better than CP All to bring the 7-Eleven brand to consumers in Laos," said 7-Eleven President and CEO Joe DePinto. "This relationship promises to bring additional jobs and economic opportunities throughout [the] region." 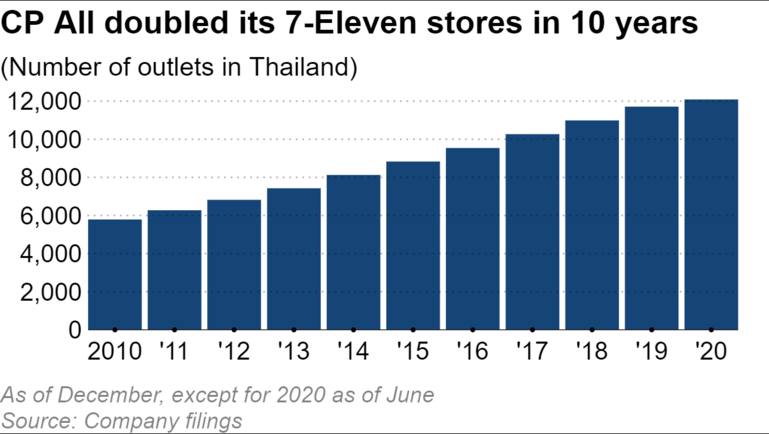 CP has invested in feedstuff, poultry and food businesses in Laos beginning about a decade ago. Analysts said now is a good time for the company to invest further in the retail business because it helps create a distribution network for selling its food and consumer products in the neighboring country.

"CP All is building its retail arm in Laos to make a profit by selling food and consumer goods produced from what it had invested in the past to Lao consumers, which have increased spending power," said an analyst at Asia Plus Securities.

CP All Laos has an initial registered capital of $2.2 million.

Laos's retail market has grown in line with its economy by around 8.7% annually and was worth around $1.35 billion in 2019, according to the Kasikorn Research Center, which stressed that 65% of the country's total population is composed of younger generations characterized by changing lifestyles.

An analyst at Kasikorn said Laos offers a big growth opportunity for the retail business as while there are 64,264 retail shops in the country, only 53 can be considered modern, thus leaving substantial room for CP All to be profitable there.