Toilet rolls: How stores in Japan ran out

Panic buying of bulky product clogs up the sophisticated logistics This Tokyo supermarket is one of many around the nation having trouble keeping household paper products in stock. (Photo by Ken Kobayashi)
AZUSA SUGIHARA, Nikkei staff writerMarch 19, 2020 13:18 JST | Japan
CopyCopied

TOKYO -- Toilet paper has disappeared from stores in Japan amid the novel coronavirus outbreak and social media-aided hysteria.

The Japan Tissue Industry Association, based in Tokyo's Chuo Ward, declared at the end of February that "there are sufficient supply capacity and inventories" of toilet paper and other paper products. And on March 3, the Ministry of Economy, Trade and Industry said about three weeks' worth of factory inventories (about 60,000 tons) and about one week's worth of distribution inventories (about 20,000 tons) have been secured."

An executive at a company that wholesales paper products for the home explained another reality. "No matter how much inventory there is at manufacturers," the executive said, "it is impossible to respond so quickly if retailers place as much as 10 times more orders than usual."

There is also an array of logistical obstacles, from form factor to the government's drive to get people to work less and play more.

Perhaps the form factor challenge is obvious. The stuff is bulky. But its also not very profitable and plagued by a delivery system designed to make frequent, small-lot, just-in-time drop-offs to stores.

This has seeded confusion amid the hysteria.

A representative of a major Japanese drugstore chain explained how his company has had to react. From March 2 to March 6, the representative said, "department managers and all other lower-level staff at the company headquarters had to deal with logistics center operations. Never had a situation like this before, even after the Great East Japan Earthquake" that leveled swathes of northeastern Japan in 2011.

The drugstore chain's distribution centers were busy responding to increased orders from stores rushing to replenish their toilet paper stocks.

Alarmed by the shortage, some retail outlets apparently arranged trucks on their own to pick up TP from wholesale warehouses.

A particularly big logistical problem has developed in the route toilet paper takes from wholesalers to retail outlets.

Since toilet paper, facial tissue and paper towels are bulkier and less profitable than cosmetics, shampoos and other daily necessities, they are often excluded from so-called "consolidated shipments" of various products that drivers drop off at retailers. Therefore, household paper-specific couriers usually make these deliveries to retailers.

But there are retailers with little room to store large amounts of household paper products. This leaves it up to couriers to make deliveries of manageable amounts of home-use paper products rather frequently. But the number of stores drivers can reach in a single day, especially in dense city centers, is limited. 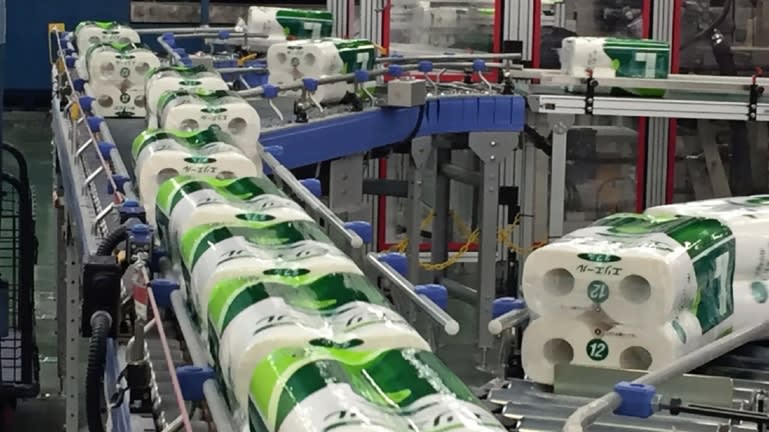 There are even hurdles to getting these products onto trucks. In Japan, it is customary for truck drivers to load and unload products at distribution warehouses.

Drivers have to tightly pack products into their 2- to 4-ton trucks for efficiency's sake. As a result, unloading usually takes about 20 to 40 minutes. Drivers also have to park their trucks alongside wholesalers' distribution warehouses for a long time.

Truck drivers are in high demand in all sectors, and it has become increasingly difficult for household papermakers to secure truck drivers willing to put up with all of these headaches.

There's another hurdle -- the government's so-called "work-style reform" push in which workers, including delivery drivers, are being encouraged to refrain from putting in overtime.

Paper manufacturers and wholesalers are considering introducing "palette deliveries," which enable drivers to load and unload products into trucks using forklifts, like they do with beverages and other products. But it is still difficult for drivers to unload products in front of each retailer.

"Orders have settled down compared with peak times, but they still remain at high levels," said a representative of Marutomi Seishi, a Shizuoka-based papermaker that has a 15% share of Japan's toilet paper market.

The toilet paper turmoil can also be seen in supermarket sales figures.

Nikkei checked sales of supermarkets across Japan between Feb. 1 and March 11, using its proprietary Nikkei POS database to tally point-of-sales figures at over 1,500 retail outlets across the country. The value of supermarket sales on Feb. 28, when they peaked, soared sevenfold from the preceding week.