Aeon to invest $4.6bn in the country in an attempt at self-transformation 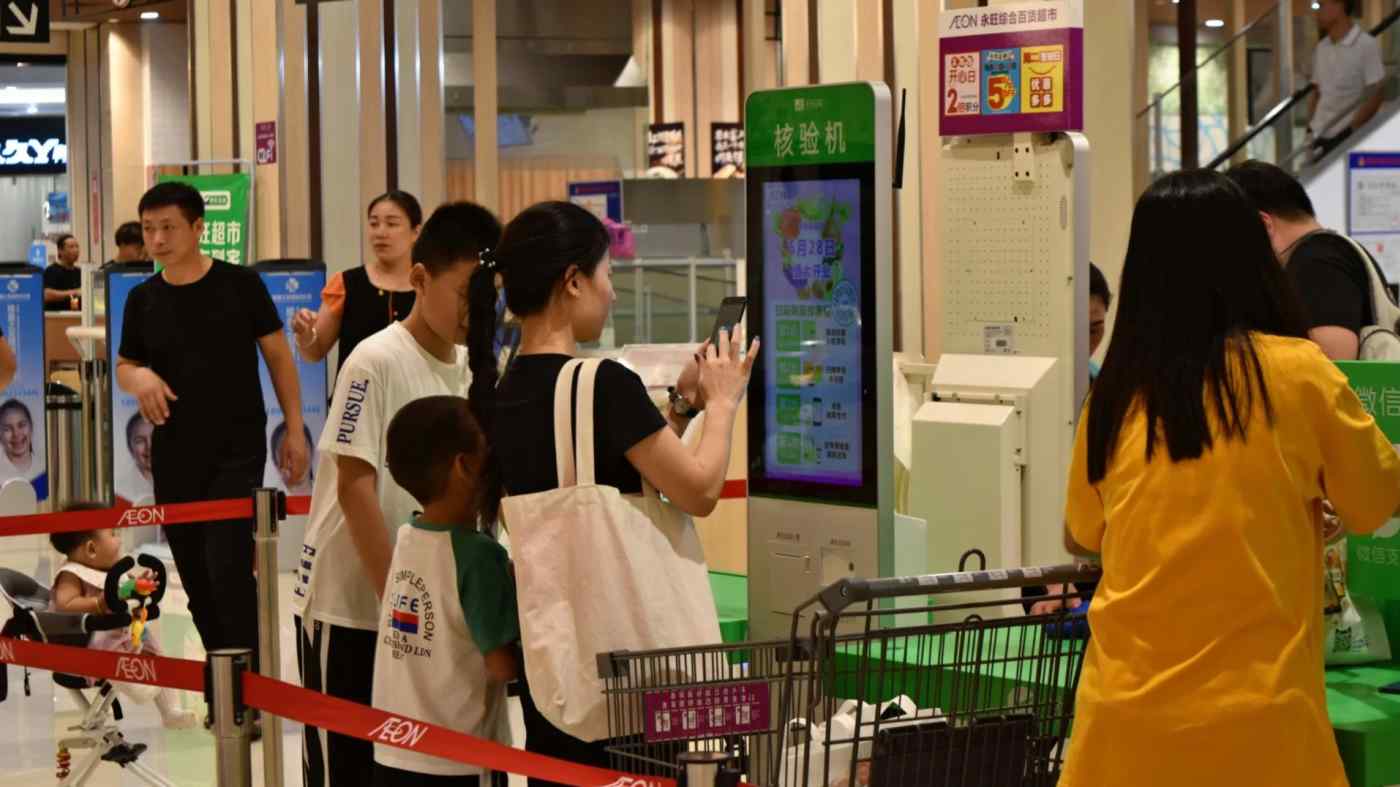 SHANGHAI -- As Japan's largest retailer, Aeon, struggles with conservative, cash-wielding consumers at home, it is looking to a China to learn how to adapt to a quickly changing industry.

Aeon will spend 500 billion yen ($4.6 billion) on its Chinese digital business through February 2021. The funds will go toward incorporating various innovations powering the e-commerce business here, and the technology will be transferred back to Japan as well as to Southeast Asia.

In Changshu, one and a half hours by car from Shanghai, group company Aeon Mall opened a 13-hectare shopping center in June. Located in an area adjacent to high-rise condominium developments, on a weeknight it teems with people back from work with family members in tow.

"I don't carry a handbag," a 20-something said. Instead, she pays for purchases primarily with the WeChat Pay mobile payment service from tech heavyweight Tencent Holdings.

Of 20 people visiting a superstore at the mall, which counts a cosmetics shop and a clothing outlet as tenants, only about one or two customers paid in cash.

By next spring, Aeon will introduce automated checkouts where customers can confirm purchases via facial recognition. Apparel stores will have virtual fitting rooms that superimpose items on the shopper's image.

Restaurants at the mall will process mobile reservations. Aeon will roll out these technological upgrades to 80 Chinese locations in a few years' time.

Okada notes the strong skepticism toward the new technology back home. "In Japan, there is excessive conservatism and negativity, and we can't make progress," he said.

The masses of purchase data gleaned from their online payment businesses can be analyzed to optimize advertising, product development and inventories. The online shopping process is so fine-tuned that a purchase can be delivered within 30 minutes.

For payments and biometrics, data privacy rules are looser than in Japan. "There is a climate of forgiveness toward failures after taking on a challenge," said Satoru Yamashita, who runs Aeon East China.

Aeon established this April a Chinese unit dedicated to digital operations. The group will develop by year-end an app to integrate the 5 million mainland members belonging to Aeon and group companies.

This arrangement will let Aeon send members the same type of information. Starting next year, the data will be personalized based on a member's age, tastes and buying habits. Aeon plans to become adept at applying the purchasing data in marketing and elsewhere.

Technological prowess gained in China will later be transferred to Japan and Southeast Asia. Aeon oversaw eight malls in Southeast Asia as of August, with the footprint to expand to 35 by February 2026.

Yet Aeon's Japanese general merchandise store business still turned in an operating loss for the first half ended August, indicating an old business model on its last legs. Whether Okada can motivate the lumbering organization to truly transform itself remains to be seen.