Uniqlo boosts investment in e-commerce in Japan and China TOKYO -- Uniqlo boss Tadashi Yanai once complained of the burden that e-commerce placed on the fast fashion chain -- but now his company is shifting its logistics and boosting investment to expand online shopping in Japan, China, Southeast Asia and the U.S.

The investments by Fast Retailing, Uniqlo's owner, are mirrored by other Japanese retail groups and show how the country is trying to catch up in online commerce, spurred by changing consumer habits because of the coronavirus pandemic.

Fast Retailing will complete an automated warehouse for e-commerce in the Osaka Prefecture city of Ibaraki by October to increase the areas to which it can deliver orders inside three days.

Serving as the delivery base in western Japan, this is the company's second such warehouse in the country.

In the autumn of 2018, Fast Retailing began operating an automated e-commerce warehouse in the bay-side Ariake area of Tokyo as a base from which to deliver products from China and other countries across Japan. Utilizing integrated-circuit tags, sensors, robots and other technology, the warehouse automates almost all operations -- reception, inspection, storage and sorting. The Osaka warehouse will be as extensively automated as the one in Tokyo.

The warehouse is being constructed with Daiwa House Industry at an estimated investment of tens of billions of yen (hundreds of millions of dollars). Fast Retailing plans to increase e-commerce to 30% of its total sales in Japan, from 10% in the business year ending in August 2019.

Tadashi Yanai, chairman and president of Fast Retailing, once said, "E-commerce has an upper limit on capacity and causes heavy burdens on logistics and delivery." The company is improving this through the warehouses in Tokyo and Osaka. The Osaka base is expected to help cut delivery times from the current five days to three or less in western Japan.

Uniqlo is emphasizing investment in e-commerce over physical stores. In the year ended in August, it spent an estimated 26.6 billion yen ($250 million) on computer systems for e-commerce and other operations, 80% more than the 14.7 billion yen spent on its domestic chain.

Fast Retailing plans to spend a total of 100 billion yen to build automated warehouses not only in Osaka but also in China, Southeast Asia and the U.S.

The rate of internet use in some countries in Asia is higher than in Japan, and the web could become an important medium of contact with customers abroad. As of the end of August 2019, the proportion of e-commerce sales in Greater China was about 20%, double that in Japan.

In addition to constructing automated warehouses in Asia, the company will promote a service called "click and collect," through which customers order goods online and pick them up in nearby stores. It is already widespread in Greater China and is faster than home delivery in some cases.

The service has also grown during the coronavirus pandemic because customers don't have to spend time in stores. 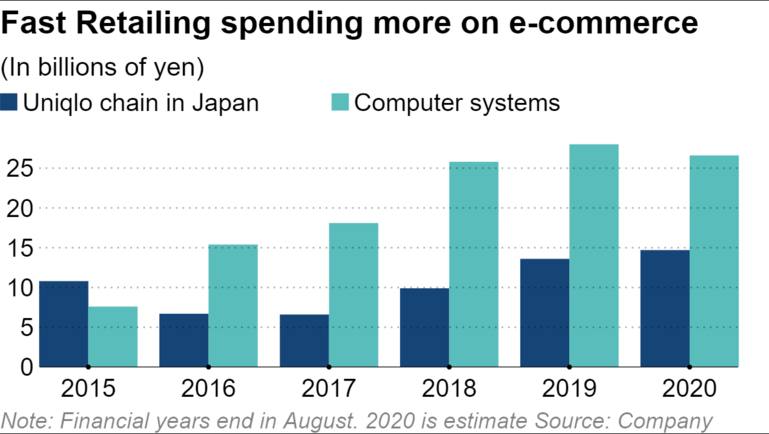 Supermarket operators in Japan are also building automated warehouses for e-commerce. Aeon will begin delivering food and other products ordered online in 2023, using expertise from the British online supermarket Ocado. It will build automated warehouses first in the city of Chiba and then elsewhere in the Tokyo metropolitan area and in the Kansai region, whose center is Osaka.

Seiyu will create an automated warehouse for its online supermarket services in cooperation with Rakuten, a leading Japanese online mall, in Yokohama in 2021.

Meanwhile, Seven-Eleven Japan, operator of the country's biggest convenience store chain, will launch fast home delivery of merchandise from its outlets. The company plans to expand the network to at least 1,000 outlets in fiscal 2021. It envisions deliveries being completed in as little as 30 minutes as a way to challenge leading e-commerce operators such as Amazon Japan.

The adoption of online apparel and supermarket services has lagged behind those of other products in Japan because shoppers prefer to try on clothes or check the freshness of food. The ratio of online services to total operations in 2019 stood at about 14% for clothing and 3% for food and beverages, compared with 34% for books and entertainment and 33% for home appliances and electronics, according to Japan's Ministry of Economy, Trade and Industry.

The pandemic is changing consumer habits. After the Japanese government lifted its COVID-19 state of emergency, 46% of consumers said they would continue or increase online clothing purchases, according to Boston Consulting Group, and 14% would do so for perishable food.

Fast Retail is promoting the development of large stores designed to enhance consumer awareness of the Uniqlo brand. This year it has already opened three big stores in Yokohama and Tokyo that combine digital and physical sales and provide an environment in which families can enjoy shopping together.

At the end of May, shops bigger than 1,300 sq. meters accounted for 30% of all Uniqlo stores under direct management by Fast Retailing for the first time.

Uniqlo is part of a growing global trend among major retailers. Inditex, the Spanish parent of the global apparel leader Zara, will raise e-commerce to 25% of its total operations in 2022, from 14% in 2019. It plans to close up to 1,200 physical outlets, especially small shops, by 2021 but at the same time open 450 big stores.