Uniqlo has more stores in China than Japan TOKYO -- In September 2001, a few weeks after the 9/11 attacks on the U.S., Japanese casualwear retailer Uniqlo opened a set of stores in London, marking the chain's first expansion overseas.

It entered the Chinese market a year later, starting in Shanghai.

Today, the number of Uniqlo shops in China has surpassed those in Japan, reaching 767 at the end of August as opposed to the 764 directly run stores back home. Its store network has nearly doubled in five years from 387 in August 2015.

And parent company Fast Retailing's China push is only accelerating.

Uniqlo added seven locations a month on average starting in June, branching out into China's regional cities. This reflects the company's growing reliance on Asia's largest economy as it succeeds in bringing the pandemic under control.

Fast Retailing is building in China a new business model integrating e-commerce with physical stores that can be exported back to Japan. While the market is a growth driver for the company, Tokyo's sometimes fraught relations with Beijing remain a business risk. 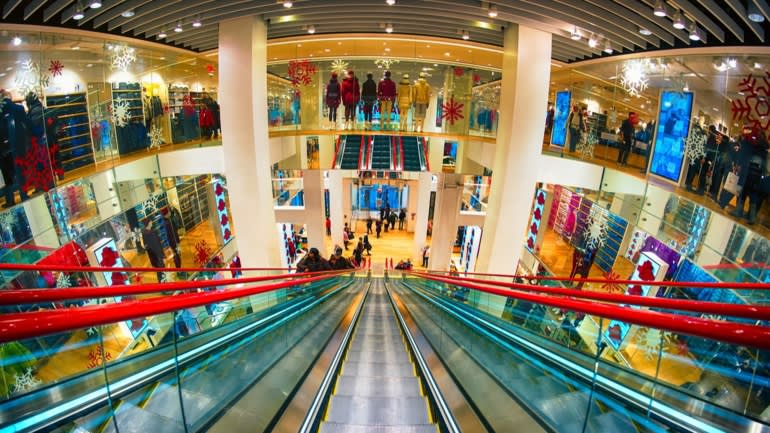 "Given the population of 1.3 billion, I think we can go for about 3,000 stores," Fast Retailing chief Tadashi Yanai told Nikkei, indicating plans to continue opening locations in the world's most populous country.

The Chinese store count rose further to 782 at the end of September. While this fell short of the overall total of 814 in Japan, including franchise stores, it may exceed the Japanese tally before 2021 arrives.

The market Uniqlo calls greater China -- the mainland plus Hong Kong and Taiwan -- generated 502.5 billion yen ($4.75 billion) in revenue for the year ended August 2019, around 20% of the total but still less than the 872.9 billion yen in Japan revenue. This Chinese-speaking market is expanding rapidly, however. It logged a compound annual growth rate of 15% for the three years through August 2019 -- far outpacing Japan's 3%. At this clip, greater China is set to surpass Japanese revenue in the year ending August 2024.

Automakers and other manufacturers often have overseas sales that exceed domestic revenues, but such a dynamic is rare in the apparel industry, which tends to focus on domestic demand. Uniqlo's international revenue has surpassed its Japanese revenue since the year ended August 2018.

China is also a cash cow. Greater China logged an operating margin of 17.7% in the year ended August 2019, compared with Japan's 11.7%. Chinese shoppers do not shun higher-priced items at Uniqlo since the company, as an analyst at a Japanese brokerage pointed out, enjoys a more upscale brand image in China than in Japan.

Chinese consumers are embracing e-commerce. About 20% of Fast Retailing's Chinese sales were from online shoppers in the year ended August 2019, double that in Japan. A Uniqlo store in Shanghai: The brand's store network in China has nearly doubled in five years. (Photo by SoQ)

Still, Fast Retailing is ramping up physical-store openings in China.

"China is ahead in terms of e-commerce and payment systems," said Yanai, who wears the hats of chairman, president and CEO. "If we can succeed in syncing e-commerce and existing stores, we can reach 2 trillion yen in sales for sure," he said. The company estimates revenue of 1.99 trillion yen for the year ended August 2020.

Integration of online and offline shopping forms the base of what Fast Retailing calls an "information-driven manufacturer-retailer." Information on sales trends is collected from around the world through smart tags and purchase data, which is then analyzed through artificial intelligence, taking into consideration weather and market trends in different regions. Sales data is extensively used for product planning, production and distribution to quickly and efficiently make clothing that meets customer preferences.

Physical stores in China are also used for fulfillment of e-commerce orders. Store inventories are tapped when items are ordered online, and customers often come to outlets to pick them up. This enables the company to achieve higher shipment efficiency than setting up separate logistics centers.

Online and offline operations are not linked in Japan, where internet orders are shipped from special e-commerce warehouses. "Uniqlo has a fully developed store network in Japan," Roland Berger partner Minoru Fukuda said. "But there is no such legacy in China, so it's easier to move digital efforts forward." Uniqlo is working to shorten lead time -- from product planning and production to sales -- worldwide from roughly a year. The Chinese business model likely will be key to this effort. Stores in China have also earned high marks for their use of social media for customer engagement.

But overdependence comes with its own risks. Uniqlo temporarily shut down nearly half of its locations there when Sino-Japanese territorial tensions flared up in 2012. Sensitive to bilateral relations, Uniqlo does not use its globally ubiquitous Japanese-language logo in China.

"It is important to strike a balance and not be too reliant on China," Yanai acknowledged.

China has fared relatively well in the pandemic. Its apparel market is projected to shrink 11% on the year to $282.5 billion in 2020, less than the 19% decline forecast for the U.S., according to Euromonitor International. And its growth will likely outpace that of other markets going forward. The Chinese market is expected to grow 22% between 2020 and 2024 to $345.6 billion, eclipsing the 17% projected for the U.S. and global markets.