TOKYO -- Uniqlo, a subsidiary of Fast Retailing, is about to transform itself from a clothing store into "social infrastructure." People around the world are finding their sense of values changing during the novel coronavirus pandemic, and support for the corporate attitude of single-mindedly pursuing growth is crumbling. As the world moves toward sustainability, Uniqlo wants to remake itself as a "more social presence," in the words of Chairman and President Tadashi Yanai.

"I didn't realize Uniqlo was like this," said a woman shopping at the Uniqlo store in Tokyo's Harajuku neighborhood on Dec. 2 during an event for Uniqlo's 36th anniversary. Fresh flowers and books were on sale in one corner of the store.

"2020 was a critical year for us," said Takao Kuwahara, a senior executive officer who joined Uniqlo in 1994. He has watched the company change at Yanai's side.

First, it is the stores themselves. The building of the Uniqlo Park Yokohama Bayside store, which opened in April during Japan's national state of emergency, has been transformed into a "park." The exterior slope serves as a giant slide, and the rooftop sports a jungle gym and other equipment. The store is filled with the laughter and shouts of parents and children all day long. Uniqlo built the facility with the idea of "a store is a park," making it open for anyone to come and play.

The Yokohama store started selling fresh flowers, and the practice spread to the company's Harajuku outlet and its flagship store in central Tokyo. "Flowers and clothing are similar," Kuwahara said. "They change with the seasons and add color to our lives." The company started selling flowers in part to go with its LifeWear brand, but also to support the fresh flower industry, which is ailing during the pandemic. 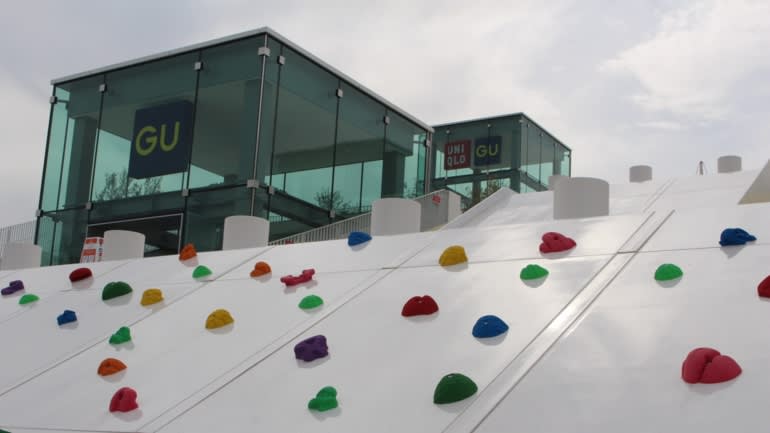 The building of the Uniqlo Park Yokohama Bayside store has been turned into a playground open to all.

At Fast Retailing's general shareholders meeting in the city of Yamaguchi on Nov. 26, fresh flowers, books, stationery and medical and hygiene products, like its AIRism masks, were added to the company's articles of incorporation. "Basically we're a clothing store," Kuwahara said, "but there are other things we can do with the same thinking."

The AIRism masks, released in June, are the symbol of this philosophy. The masks attracted a large number of customers, and thanks partly to them the company has seen six consecutive months of year-on-year growth in domestic same-store sales.

Yanai, however, did not get on board with selling the masks until the very end, asking, "Why would a clothing store sell masks?" and "Won't this be a problem for mask vendors?" Initially reluctant to accept the younger employees' idea, Yanai eventually came around after receiving a large amount of customer feedback.

Every day, Fast Retailing employees receive an email titled "Voice of Customer." It contains a compilation of customer complaints and requests received at call centers, in stores and online. There are an average of several hundred customer comments each day, and "Chairman Yanai is the most enthusiastic reader," according to Kuwahara. The most common request during the pandemic was for mask products.

The number of products that have come into being thanks to customer feedback is steadily growing. The company developed cosmetics under the GU brand and undergarments that open at the front -- easier for seniors and post-surgery patients to wear -- in response to customer feedback. It also sells AIRism sheets and Heattech blankets in stores.

Looking further back, Fast Retailing started selling vegetables in 2002. The company has been looking for ways to expand its product range for about 20 years, including a series of acquisitions of specialty shoe stores in 2005 and 2006, but it has not had much success. More recently, it has focused on products for daily life, such as blankets and sheets. Inditex, which is the operator of Zara and is the world's largest apparel company, will also step up its range of daily living and miscellaneous products. With people going out less during the pandemic, demand for items other than clothing, such as home decor, is growing, and the main battleground among major apparel companies is spreading to other fields.

Fast Retailing's goal of becoming an "information, manufacturing and retail company" also originated from the voices of its customers. People are looking for a growing number of products from Uniqlo. For Fast Retailing, whose domestic business is losing steam, a hit product could open up new markets.

Fast Retailing's approach to business has changed too. The company used to set high sales targets, such as "5 trillion yen ($48.3 billion) by fiscal 2020," in its pursuit of growth, but in more recent years has not touted such an approach -- at least in public. "The issue is not sales," Yanai said. Instead, during the pandemic the message has been to emphasize that it is succeeding as "a social company."

In November, the company launched a "recycled down jacket" that reuses feathers. "We'll go beyond being lifestyle infrastructure and become social infrastructure," said Masahiro Endo, head of the social communication team.

Fast Retailing's sales for the period ended August were 2 trillion yen, down 12% from the same period last year.

Inditex, on the other hand, is struggling. The industry leader's sales in the first half of the fiscal year ended in July were down to 8 billion euros ($9.8 billion), a 40% drop on the year, due to poor performance in Europe because of the pandemic. Sales for the full year are likely to be significantly lower than last year's 28.2 billion euros, and the sales gap between the two companies is likely to narrow more than usual. "There are high expectations that Fast Retailing can grow beyond Japan and into Asia," said Sho Kawano of Goldman Sachs.

As companies grow, however, their actions come under greater scrutiny by the rest of society. This is even more the case when they become an industry leader.

Fast Retailing itself was under intense public scrutiny until the mid-2010s. Multiple human rights groups flagged harsh working conditions at the company's factories overseas. In Japan, the company was criticized as a "black company" based on its working environment and the high turnover rate of new employees.

The company responded by changing tack, and in November it was included as a component of a global ESG (environmental, social and governance) investment index. "Yanai is very thorough in following through after he decides on something," said Takashi Nawa, a visiting professor at Hitotsubashi University and an outside director at Fast Retailing. "He is so focused on sustainability that it has surprised everyone."

"A company that only pursues its own profits will not attract talented people," Nawa said. In particular, young consumers such as millennials and Generation Z pay attention to corporate attitudes.

That means sustainable growth and ESG management are becoming more important. They are now the two issues facing Fast Retailing as it seeks to become the world's top apparel company. 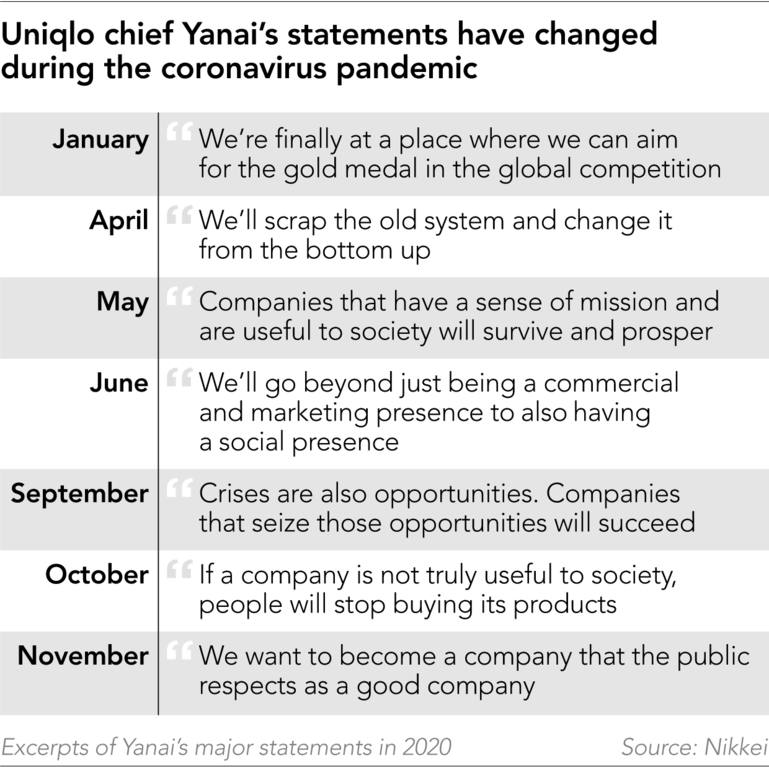 In late April, Fast Retailing executives met and decided to gradually reopen the company's closed stores with thorough anti-infection measures in place. The decision to reopen during the state of emergency was "difficult from a commonsense standpoint," according to a Fast Retailing executive, but many consumers who wanted to buy everyday clothing supported it. The decision was ultimately made by Yanai.

Yanai's leadership during the pandemic has further strengthened his central role at the company. Yanai, who will turn 72 next February, used to say he would retire at 70, but that kind of talk has vanished of late.

However, the issue of succession continues to be one of Fast Retailing's biggest management challenges. When asked about his successor at a shareholders meeting in November, Yanai said, "I would like to create a management team from among nearly 60 executives." As for his two sons, who serve on the board of directors, Yanai said, "I would like for them to play a role in governance, not management," confirming that the company's management would not be hereditary.

The company's central control is growing stronger, but that raises other issues. "Even the executives can't make any decisions," said one Fast Retailing employee. "All they do is visit the president." The issue now is how to create a management system that does not rely on charisma.

Fast Retailing's stock price has stayed at high levels during the pandemic. Shares briefly hit 88,630 yen on Nov. 17, a record high since its listing. The stock price has nearly doubled since the end of March. The European market, Inditex's home turf, has seen a number of store closures this year because of the pandemic. The pandemic has had a relatively moderate impact in Asia, where Fast Retailing is based, compared to Europe and the U.S.

In the fiscal year that ends August 2021, Fast Retailing plans to significantly increase sales and profits in China and other parts of Asia. Its net profit is expected to hit a record 165 billion yen. If U.S. and European markets take more time to recover, the gap in market capitalization between Fast Retailing and Inditex is set to grow even smaller.