TOKYO -- Fast Retailing's Uniqlo casual clothing chain made a big splash in Japan earlier this month when it introduced face masks made with a high-tech material. The masks sold out within hours.

It was the latest episode in Japan's bout with the lingering COVID-19 outbreak, a fight that has triggered some remarkable trends, social shifts and political missteps. But the AIRism mask story is also the retelling of a simple business edict.

Listen to your customers.

That the masks would quickly sell out was evident almost as soon as they went on sale. When the doors opened at Uniqlo stores across Japan, customers were already in line, waiting to get inside and out of the rain.

And to think Fast Retailing initially did not want to break into the market, with Chairman and President Tadashi Yanai declaring that the company "will not sell masks."

At an earnings call in April, Yanai said, "We will make contributions [to the fight against the coronavirus] through clothing rather than masks."

Some people went old school, hand-wrote their requests for masks on postcards and mailed them to the company.

Back on social media, people were posting pictures of masks they made themselves using the company's AIRism fabric.

One of the reasons Uniqlo at first shied away from making masks was that it had no previous experience in the sector. It knew how to design underwear that absorbs odors and make clothing of thin material that nevertheless keeps people warm in the winter. But protecting consumers from a new virus was not in its skill set. Fast Retailing, the Uniqlo operator, has filed for a patent for its three-layer AIRism mask. (Photo by Yo Inoue)

So why did Yanai change his tune?

One of the company's management principles is to adhere to the importance of the "front line, actual products and reality."

Yanai did his about-face in accordance with the principle.

According to Uniqlo, it is not uncommon for its product developers to take customer wishes into account. What was new this time was following them into a whole new business category.

Uniqlo has not revealed how many face mask requests it fielded, and it is difficult to guess how many it would take to change Yanai's mind.

But Uniqlo does have a solid fan base. Its clothing is so popular in Japan that there are references to it as a "national uniform."

There seems to be a particular affinity for the company's AIRism fabric.

Uniqlo markets the material for its ability to keep the wearer "dry as it wicks moisture, releases heat, and absorbs sweat while maintaining a smooth feel all day."

The fabric is made of microfibers that Uniqlo says absorb, neutralize and eliminate sources of odor.

Aside from the antimicrobial properties, consumers seem to like AIRism underwear for its silky feel.

The material was developed in conjunction with major chemical group Toray Industries. The partners also worked together to develop the face mask.

Uniqlo has filed for a patent on the mask, which features a triple-layer construction -- a high-performance filter sandwiched between the outer mesh fabric and the AIRism layer.

It is somewhat ironic that Fast Retailing has a runaway hit on its hands months after a similar initiative of Prime Minister Shinzo Abe flopped.

The initiative was to distribute washable face masks to every household in Japan. It was announced while Japan was dealing with an acute shortage of masks, but many of Abe's masks did not arrive until after Japan had started to slow the virus's spread. The masks were also panned for being of poor quality, and all along Japanese derisively referred to them as "Abenomasks," a play on the prime minister's signature economic policies, Abenomics. 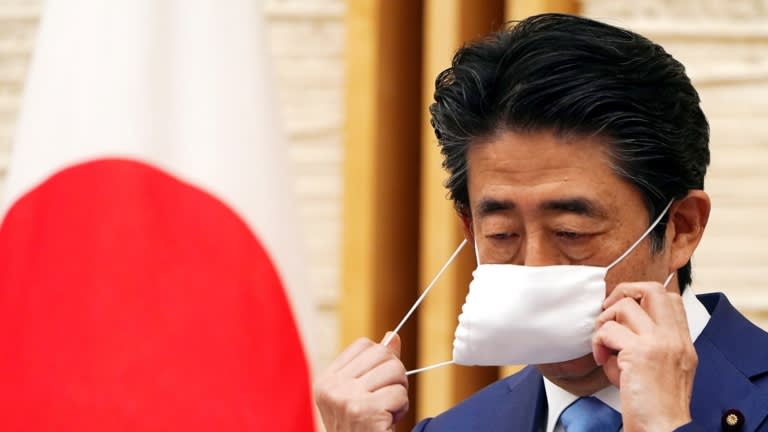 Uniqlo's masks arrived later still, but consumers were clamoring for them.

Japan's battle to procure masks during the coronavirus outbreak took other dramatic twists and turns.

In April, amid an unprecedented shortage, many Japanese tried to exploit the situation by reselling masks online, often at sharply inflated prices. The government then outlawed the practice.

During the two months, the mundane products became the subject of political discourse and public debate. They also gave the fashion industry a boost.

Sportswear makers Mizuno and Under Armor of the U.S. also introduced branded face masks that quickly sold out.

With everybody now wearing face masks, new markets have emerged for sterilization agents and cosmetics to treat skin problems caused by long hours of keeping one's face under wrap.

Uniqlo is not the first retailer in Japan to be reminded of the rewards that can come from listening to the customer. Department store operator Isetan Mitsukoshi Holdings was passed a similar note leading up to 2006.

Another brand is involved in this anecdote, Louis Vuitton, which has been a fixture in tony shopping districts across Japan but has never had a presence in the Isetan Shinjuku store that is said to be the world's largest fashion department store.

This lack of a partnership between the two proud players is because Louis Vuitton and Isetan Shinjuku -- Shinjuku is a bustling shopping district in the middle of Tokyo -- are so confident in their brand value and selling power that they are not willing to strike a deal if it is not on their own terms.

There is no bad blood between the two icons. In fact, Louis Vuitton had been absent from all Isetan stores until 2006, when the French luxury brand made its first foray into an Isetan department store. The commingling came in Urawa, in the city of Saitama, a Tokyo suburb.

The move was a response to calls from customers. In a survey before a makeover of the Urawa store, an overwhelming majority of respondents said they wanted a Louis Vuitton boutique.

Uniqlo and Isetan changed their policies after listening to their customers, after heeding a golden rule for success.