TOKYO -- Fast Retailing has accrued 1.12 trillion yen ($10.1 billion) in cash holdings, more than tripling its stockpile in five years, but the Uniqlo operator does not plan to spend money on acquisitions.

The clothing giant prides itself on being a disrupter. But now an established giant in the apparel industry, it faces the risk of becoming yet another Japanese company under fire for hoarding funds at the expense of capital efficiency, straying from the vision of its founder.

Fast Retailing warned in its latest earnings report last month that operating profit for the full year through August will shrink 5%, a reversal of the previous growth forecast.

At the same time, the company added 28.5 billion yen in cash and cash equivalents in the first quarter through November last year, enough to put the total over the 1 trillion-yen milestone.

"The company should use [the cash] on promising investment targets if there are any, but retaining it would also be a valid choice," said Nomura Securities analyst Hidehiko Aoki.

The growing cash pile partly stems from by Uniqlo's early challenges. The chain expanded its footprint aggressively after opening its first outlet. But this meant it often ended up short on operating capital, with any money that came through the door leaving almost as quickly.

"We were generating profit, but we had no funds," Chairman and CEO Tadashi Yanai said, reflecting on the chain's early days.

Uniqlo eventually took off and propelled Fast Retailing to become the 2.3 trillion-yen business it is today. Sales have multiplied 70 times since the company went public 25 years ago.

Also contributing to the buildup is an about-face from large-scale acquisitions. Fast Retailing embarked on a spending spree during the 2000s, buying up brands at home and abroad with decidedly mixed results. 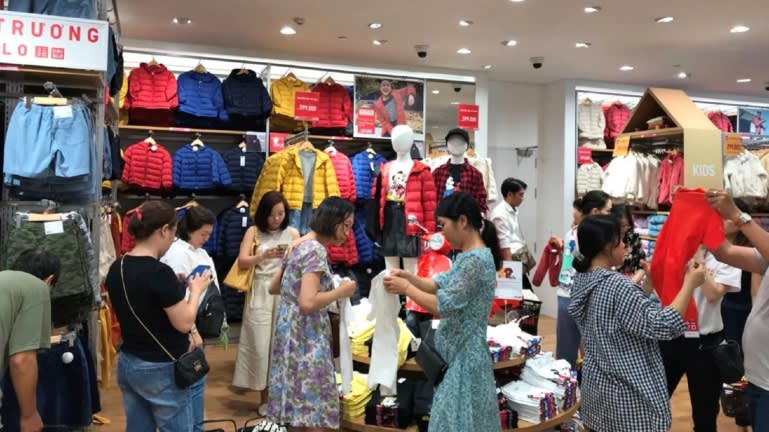 A Uniqlo store in Ho Chi Minh City, Vietnam: "The next 100 years will be the age of Asia," said Fast Retailing CEO Tadahi Yanai. (Photo by Tomoya Onishi)

"The fact that they were overly influenced by Uniqlo had an effect," said a former Fast Retailing executive.

Now, Fast Retailing is concentrating its resources on tech development toward the goal of deriving 30% of revenue from online sales. But the company so far has not taken cues from companies like Walmart, which has bought a series of online retail assets.

"We intend to grow without spending money" on acquisitions, Yanai said, indicating that Fast Retailing's growth strategy will continue to center on opening new outlets.

The group plans to open about 100 new stores a year in greater China. Its Southeast Asian presence will be expanded as well. Emerging markets will be the key to Fast Retailing achieving its revenue goal of 10 trillion yen.

But brick-and-mortar stores can only do so much as consumers, including in emerging economies, embrace online retail. Furthermore, Uniqlo had to temporarily shut down about half of the 750 stores in the country due to the coronavirus outbreak. The country is home to the largest network of stores outside of Japan, meaning a long-term virus scare would leave a dent.

There is also the rise of direct-to-consumer apparel startups that mine data on social media, then swiftly produce apparel matching customer demands. Yanai, however, does not see them as a threat.

"It is not that easy to make things that customers want," Yanai said, likening the business model to a "complete hobby." Yanai sees no prospect of direct-to-consumer operations developing in scale, and predicts revenue will top out at 20 billion yen to 30 billion yen.

Yanai stepped down as an outside director for the tech conglomerate SoftBank Group late last year. "From now on, I will focus 100% on the company," Yanai said during a Fast Retailing board meeting in January.

Yanai and SoftBank Chairman and CEO Masayoshi Son respect each other, and Yanai had served as Son's close adviser since 2001. But unlike Yanai, Son aggressively investing in outside businesses.

"He's the polar opposite of me," Yanai said.