YANGON -- A hut in Kawhmu, a town 90 minutes by car from Myanmar's commercial capital, Yangon, seems an unlikely symbol of the country's economic transformation, but it is.

The village's general store sells a panoply of daily necessaries and snacks. Sachets of instant coffee and detergent dangle from the wood and bamboo ceiling. Although the scene looks rustic, beneath the surface, the shop and many others like it are modernizing.

Japanese startup Linklusion is bringing know-how developed in Japan's hypercompetitive convenience store business and innovative IT tools to Myanmar's rural shops. It matches suppliers with retailers, offering weekly deliveries of goods. Shop owners can select from around 300 items, giving them access to a much wider range of products than before.

Aye, the 60 year-old owner of the shop in Kawhmu, is happy with Linklusion's service, which saves her time and money traveling to market to stock up. "Whenever a new item appears in the catalog, I order it to try it out," she said. In May, the company began full-scale deliveries to customers.

Yangon-based Linklusion's main business is fostering financial inclusion. It builds customer-management systems for microfinance institutions, which offer tiny loans to borrowers in rural areas. The company recently raised around 64 million yen ($600,000) in fresh capital from a group of investors including Phyz Holdings, a Japanese company that offers logistics outsourcing services. So far, Linklusion has raised 110 million yen in all.

The company incorporates Japanese methods and technology to manage orders and inventory, helping meet the needs of Myanmar's rural retailers. It began on a trial basis in 2018 with just 10 stores. But word quickly spread. Soon the company started receiving "complaints" from shop owners who were not among its customers, said Linklusions's managing director, Hidenori Kuroyanagi.

As of December, the company had 175 client shops. Its most popular items include prepaid telephone cards, powdered drink mixes, seasonings and confectioneries, said Kuroyanagi. 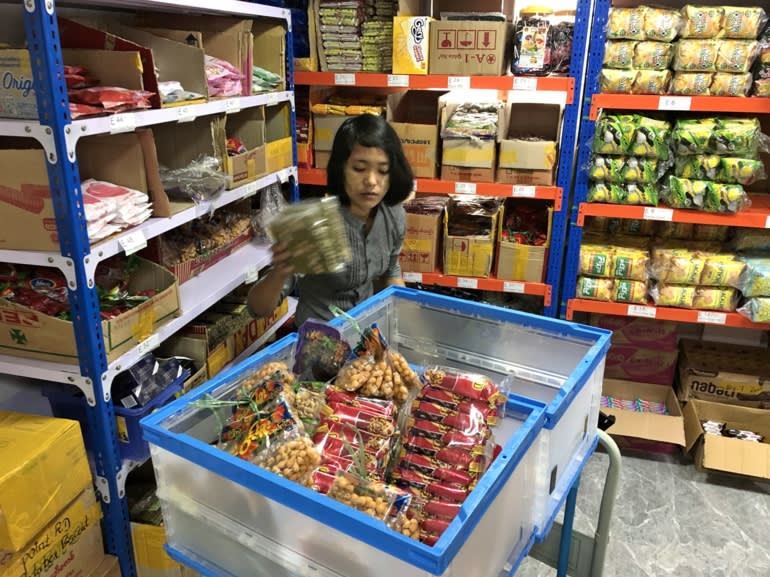 In the Linklusion's warehouse in Kawhmu, a worker packs foods in collapsible plastic boxes for delivery to shops. (Photo by Yuichi Nitta)

Linklusion's distribution center is a two-story house in central Kawhmu. The first floor serves as a warehouse. Shinya Kawai, who oversees the business, lives in the house and offers guidance to local staff.

Kawai once worked for a major Japanese convenience store chain, running its overseas operations. "I am always thinking about ways to improve efficiency, trying to figure out the best mix of items for shops with limited store space and the best approach for efficient deliveries," he said. With sales ranging from just $200 to $300 a month in village shops, such efficiency is vital.

The warehouse is stocked with an array of daily necessities and foodstuffs. Workers fill orders by hand. The collapsible plastic boxes used for deliveries are imported from Japan.

Foreign companies excited about Myanmar's growth prospects tend to focus on big cities like Yangon. But 70% of the country's 50 million people live in rural areas. Linklusion spotted the inefficiency of the retail sector, particularly in the countryside, and saw an opportunity for growth.

Incomes in rural Myanmar have not kept pace with those in large cities. As a result, wholesale prices are rising faster than retail prices in rural areas, squeezing stores' profit margins, according to Kuroyanagi. This poses a big challenge.

Linklusion plans to expand the number of shops it deals with to 2,000 by 2021, using its network of clients to offer job training programs for customers as well. It foresees having shops sell insurance policies to customers, giving owners an opportunity to generate a stable income, Kuroyanagai said.