TOKYO -- Thanks largely to rising demand in China, Japanese robot maker Fanuc is on a steady growth path, expecting a 36.5% rise in group operating profit in the current fiscal year through March, to 209.1 billion yen ($1.83 billion) from a year before. But Chairman and CEO Yoshiharu Inaba is eager to expand further, especially in Europe.

On Oct. 26, the Yamanashi Prefecture-based company announced its latest earnings for the July-September period at its headquarters in Oshino, west of Tokyo. The figures show how well the company's three business pillars -- numerical control devices, robots and other industrial equipment -- are being integrated to generate growth.

Not enough capacity to make more

"Production is at full capacity so sales are capped. We can't make any more," an upbeat Inaba said as he described the company's industrial robot operations at the earnings announcement. In the latest quarter, Fanuc's sales of industrial robots rose about 20% from the same period last year, to 55.1 billion yen. Demand is growing thanks to China, which is increasingly investing in automation. With current capacity, it is difficult to meet the greater demand, Inaba said, adding that production and sales "have plateaued and will stay there" for some time. Though the company has been trying to boost capacity, such efforts are "a drop in the bucket," he said.

Fanuc is betting on a new 63 billion yen ($550 million) factory it plans to build in Ibaraki Prefecture, northeast of Tokyo, in 2018. With the new factory, monthly robot production is expected to nearly double from the current level to 11,000 units.

"Only after the new plant begins operations will we be able to grow production substantially," Inaba said.

Not only robots but a wide variety of mainstay Fanuc products are selling well in China, including machine tools and numerical control devices, with which Fanuc controls the top share worldwide.

Inaba maintains a relatively positive outlook for the Chinese economy: "The level of investment in infrastructure such as railways is very high, and local automakers are actively investing more than ever before."

In Europe, Fanuc's industrial robots are spreading among automakers, eating into the hitherto dominance of local robot makers. "[Fanuc's] market share in Europe will grow further and further," Inaba said. 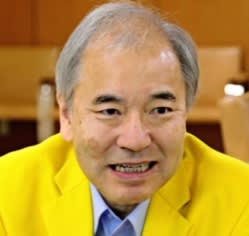 "Demand for numerical controls has not fallen at all," Inaba said. Though competition from Chinese makers of numerical controls -- which are the brain of machine tools -- is getting fiercer, "with our level of technology [among other things], we are well placed to rival them," Inaba said. He is also willing to take on tough rivals in Europe, hoping to eventually gain a more than 50% share of the market.

Robotic machines, including machine tools such as the Robodrill, used in smartphone production, contributed strongly, with sales more than doubling to 45.6 billion yen. Demand from contract electronics manufacturers in Taiwan and elsewhere, geared toward Apple's new iPhones, appears to have provided a boost.

Inaba expects strong orders in the latter half of the fiscal year. Since Inaba became president in 2003, Fanuc has been actively making investment to increase production to meet customer demand. Investment is likely to continue in anticipation of bigger demand. The company is also diverting money to new growth areas such as the development of fiber laser devices that can make high-precision cuts at high speed. In the current fiscal year, Fanuc plans to make 100 billion yen worth of capital investment, Inaba said.

Full-year sales are expected to be around 700 billion yen, roughly the same level as in fiscal 2014. But the operating profit margin will likely fall from over 40% in that year, with the profit expected to shrink by 90 billion yen.

"We were very fortunate," Inaba said of the high profit margin in fiscal 2014. "Now we must steadily strengthen our competitiveness and ensure the company lasts for a long time," he said.

To enhance business continuity, Fanuc has decentralized production bases from its headquarters, and increased the number of employees in research and development. As a result, fixed expenses and other costs have grown, squeezing profit margins.

Nonetheless, booming demand in China and other factors are providing a tail wind for Fanuc and will likely keep the company on a steady path. But if the market environment, such as in China, changes significantly, increased costs could become a burden. Competition is especially fierce in industrial robots, an area in which Fanuc has been investing heavily, including building a new factory. It is unclear whether the company will continue growing and maintaining its high profits.

Fanuc has been winning continuously amid the ups and downs in the global economy. Whether it can keep its strength when the economy enters an expected period of contraction depends on Chairman Inaba.