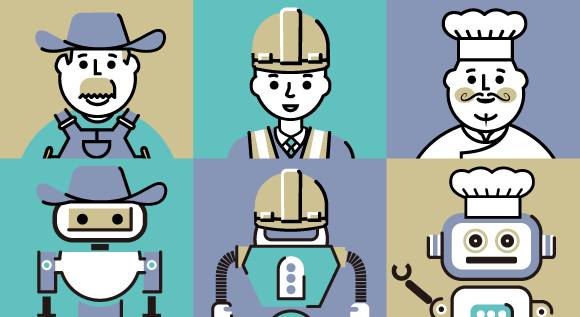 Robots can handle a third of our workplace tasks, study finds

Just don't ask them to use their imaginations

SAN FRANCISCO -- Human workers are far from obsolete, but robots are ready to give us a run for our money.

Amid the global proliferation of artificial intelligence, research compiled by The Nikkei and the Financial Times has found that machines are capable of handling about one-third of some 2,000 workplace tasks hitherto performed by humans.

The findings also suggest Japan has the most room among major countries for introducing AI and robots, with more than 50% of tasks primed for automation.

The Nikkei and FT combed through data collected by McKinsey & Co. on 820 occupations and 2,069 specific tasks they entail. The survey found that 710, or 34%, of the tasks could be handled by machines. For just over 40% of the occupations, half the accompanying tasks could be automated.

Even so, only less than 5% of the occupations are expected to become completely automated.

As you might expect, simple tasks that involve repetitive motions are right up robots' alley.

McKinsey's information shows that 58, or 75%, of 77 processes handled by engine assembly line workers can be automated. The 58 tasks include putting together parts according to fixed specifications and packing products.

This is not lost on automakers like General Motors, which has deployed 30,000 robots worldwide -- 8,500 of which share information every 90 seconds to guard against malfunctions.

But automation is by no means limited to manual labor.

U.S. telecommunications company AT&T lets software bots take care of 500 types of work, including documenting orders and resetting passwords. Since computer systems can spot incorrect data and perform calculations faster and more accurately than humans, the number of bots will triple by the end of this year, according to Dhruval Shah, director of robotics at AT&T.

When it comes to clerical jobs at financial institutions, robots can handle 39, or 65%, of 60 types of work -- filing included. At Goldman Sachs Group, the number of traders has decreased dramatically from the 600 employed back in 2000, as automated stock trading has taken over.

Well-known investor Jim Rogers has said that AI will wipe out securities broker and clearing jobs.

Robots do have plenty of weaknesses, though. They are ill-suited to tasks that require decision-making, planning and imagination. Managing an organization is still not a job for a machine.

Of 63 tasks performed by executive-level managers, including chief executives, robots can deal with only 14, or 22% -- such as preparing charts to show the progress of a project.

Artists, including actors and musicians, have even less to fear from the robot hordes. Only 11, or 17%, of 65 artistic tasks can be automated.

McKinsey's data also sheds light on the proportion of workplace tasks that can be automated in various countries. Japan leads the way, at 55%, compared with 46% in European countries and 46% in the U.S.

Japan's figure is even higher than the 51% for China and 52% for India, despite their heavier reliance on manual work, such as agriculture and manufacturing.

As it turns out, clerical workers at Japan's financial institutions, insurance companies and government offices handle a greater number of routine tasks that are suitable for robots, such as preparing data, according to McKinsey. The same is true in the manufacturing sector.

One reason is that Japan has lagged behind the U.S. and other countries in automating clerical tasks at government offices, law firms and other businesses. Large law firms in the U.S. are increasingly using AI to sift through vast amounts of evidence. Similar practices are likely to catch on in Japan in the future.

"Jobs in Japan have the potential to be automated as the population is decreasing," said Alastair Bathgate, CEO of Blue Prism, a major British developer of software robots.

The spread of automation clearly has its drawbacks. Some office and factory jobs are already disappearing. But with Japan's working-age population expected to shrink by 40% in 50 years, improving efficiency is crucial across the public and private sectors.

The combination of AI and robotics offers a means of doing just that.

This article is part of a joint project of The Nikkei and the FT.