Panasonic, Fujitsu, Hitachi among Japanese firms seeking to return to forefront of innovation Keeping the elderly mentally active, helping people remain healthy as they age, and assisting parents in child-rearing are among the most urgent issues facing these countries. For many in Japan's IT industry, finding solutions to these problems is key to putting it back at the forefront of global innovation, a position long ceded to the likes of Google, Apple and Samsung. Many of their ideas are currently on display at CEATEC Japan, an annual electronics trade show that started Tuesday. Much like the exhibitors, the show is in the process of reinventing itself -- from an event for gadgets into one showcasing artificial intelligence, robotics and other latest technologies, and involving a wide range of industries such as finance, travel, entertainment and machinery.

"The low birth rate and aging population are the biggest risks facing Japan," said Internal Affairs and Communications minister Seiko Noda at an opening reception. "All available resources -- including data -- need to be mobilized to tackle this challenge."

One potential boon to seniors being highlighted at this year's CEATEC is a "smart" speaker from Fujitsu. The tube-shaped AI speaker has a sensor at the top. Place a finger for a few seconds and it immediately measures the heartbeat and the condition of the blood vessels. The speaker then asks questions, such as how much physical activity the user does.

In the future, Fujitsu hopes, the machine will be able to measure vital signs just by analyzing a user's voice. Cloud storage is used to keep the voice data and compare it with that of other users, and the device will eventually offer various suggestions on diet or exercise, according to Yoshizaki.

Fujitsu is eyeing overseas markets as well. "Aging is a common challenge facing all countries, including the United States and China," Yoshizaki said. Another product, Hitachi's care robot, Magnus, is a white, sphere-shaped smart speaker with a face that looks like emoji and can display emotions. "We thought a simple exchange of words is not enough for a relationship to develop between the robot and the user," said Masahide Ban, a product designer for the company. "There have to be emotions."

Hitachi envisions that such a robot could eventually be used by the elderly, while they are still healthy, to perform such responsibilities as reminding them to take medicines. The conglomerate's goal is to develop a robot that can detect maladies such as dementia at the earliest possible stage. 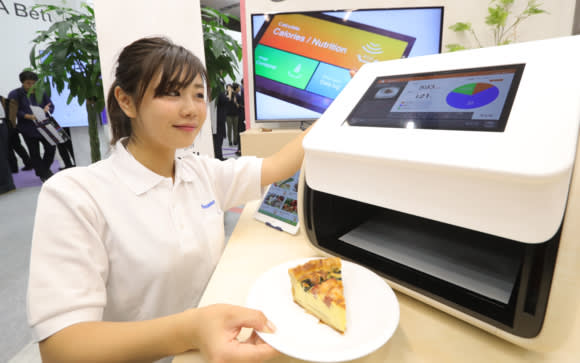 Staying healthy is also key to a happy life for seniors. Panasonic has developed a microwave-resembling machine called Calo Rieco, which can calculate a dish's total calories and nutrition balance in 15 seconds -- with an error rate of about 10% for solid food and  20% for liquid food.

Calo Rieco will also keep dietary data in cloud storage and make suggestions about diet and menus. The machine could be useful for diabetes patients who need diet control, or anyone trying to watch his weight. Manabe says Panasonic is working to make the calculation more accurate and speedy. A thin, bendable rechargeable battery from Panasonic could be stuck on the body of a patient to power a sensor recording the patient's condition.

Panasonic has a solution for bed-ridden patients as well. It has developed an ultra-thin, bendable rechargeable battery -- weighing just 1 gram or so -- that can be attached to a patient's body and power a sensor to record his condition unobtrusively.

The battery is durable -- it won't break even after getting bent 1,000 times, says Masayo Fuchigami, a Panasonic engineer.

CEATEC is also offering helpful devices for hospital visitors who don't speak Japanese. Fujitsu has developed a small translator -- 75mm high and 95mm wide -- that translates conversations in Japanese, English and Chinese, covering 90% of the exchanges at international hospitals in Japan. 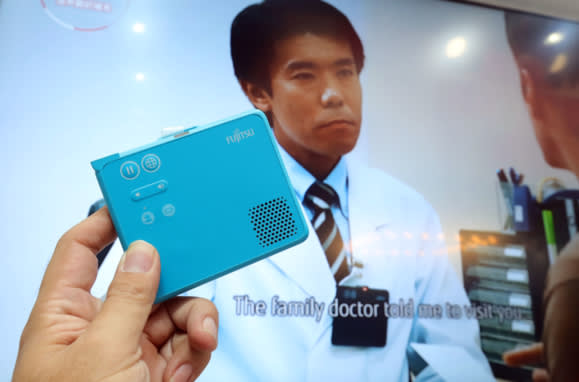 Those hospitals typically have professional translators on staff, but such devices could make the jobs of nurses and receptionists much easier.

The product has already been used in a number of international hospitals in Japan on a trial basis.

Conversations have been recorded in cloud storage and analyzed for the kind of questions asked and whether the machine is able to produce appropriate translations, so that it can be improved further, said Nobuyuki Washio, a Fujitsu engineer.