Rub-a-dub-dub, Singapore heads for the tub SINGAPORE -- More and more Singaporeans are installing bathtubs in their homes to enjoy a hot soak at the end of a stressful day.

Traditionally, people in the tropical city-state take showers to clean up and stay cool. Temperatures hover around 30 C throughout the year. 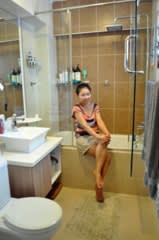 Jacqueline Teo installed a bathtub in her public apartment.

These days, 80% of the population lives in public housing, full scale construction of which began in the 1960s. Residents of these state-built apartments can purchase them outright. They are equipped only with showers, and bathtubs were considered a luxury item for fancy condos and single-family homes. But tubs have grown more popular over the last five years or so for apartment dwellers.

In with both feet

Sim Siang Choon Hardware, a major bathroom fixture wholesaler and distributor, sells 50 different kinds of bathtubs and whirlpool baths. A store official says most customers are people in their 20s and 30s who have purchased their own houses. Nearly 50% of all bathtubs sold go into public housing.

The official said that a decade ago the store sold only one or two bathtubs a month. Now it sells 30 a week.

Small bathtubs made by Trojan Plastics of the U.K. are particularly popular. They retail for 300-500 Singapore dollars ($239-$399). Extras such as whirlpool equipment pushes up the price tag to around S$1,400. A sales manager said that price is within the budgets of middle-class, two-income households.

The Singaporean habit of frequently relocating and refurbishing their houses is contributing to the popularity of bathtubs. Newer public apartments are bare cement, which allows residents to customize their interiors.

Those who have the means frequently trade up for a larger home. Over the past decade or so, a real estate boom has livened up the housing market and the remodeling business. People typically spend around S$50,000 to refurbish a previously occupied house, but the market appears to be losing steam.

Prices for previously occupied houses have set new records nearly continuously since 2006, but they began plunging earlier this year after the government took steps to cool housing investment.

In eastern Singapore's Tampines district, where public housing is common, Jacqueline Teo and her family bought a used apartment. Before they moved in, they remodeled the bathroom and put a bathtub. Teo said she wanted a bathtub because she enjoyed a soak when she was studying in Australia. She also said the bathtub is very useful for bathing her two kids.

Vincent Yap, who owns a small business, has a whirlpool bath in his public apartment. When he refurbished the place, he said money was no object; relaxing in the tub is a favorite weekend activity.