A hugely popular South Korean TV drama has sent Chinese consumers into a buying frenzy for clothes, shoes and accessories worn by the characters, giving Western luxury brands a noticeable bump in sales in China. 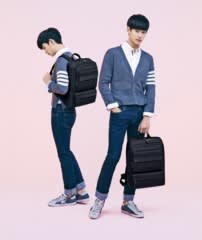 This Samsonite bag carried by actor Kim Soo-hyun in the popular South Korean TV drama "My Love from the star" has been selling well.

The drama, whose title has been translated into English as "My Love from the Star," first aired in South Korea. It tells the story of an alien stranded on Earth who falls in love with a famous actress.

According to some sources, the drama has been viewed online in China more than 2 billion times. On Weibo and other microbloging services in China, fans of the show have been quick to share information about the clothes, accessories and makeup products used by characters on the show. These are usually Western luxury brands, which in turn have seen spikes in sales.

A store for the French brand Celine in the city of Dalian has seen a steady stream of young women asking for the red shirt worn by the main female character, played by the real-life movie star Jun Ji-hyun. These women often have a picture of Jun wearing the shirt ready for reference on their smartphones.

In episodes 2, 3 and 4, Jun's character, a South Korean movie star, wears a pair of Jimmy Choo silver shoes. The shoes have since sold out, first in China and then in South Korea -- and then in Dubai, Europe and the U.S. as female Chinese tourists bought them.

This at first puzzled Jimmy Choo CEO Pierre Denis. But then the company's Hong Kong branch briefed him about the TV show. This inspired Denis to immediately order the discontinued line of shoes to go back into production.

A Samsonite bag carried by actor Kim Soo-hyun, who plays the heartbroken alien, has also been selling well. Samsonite has reduced the lead time between order placement and delivery for the bag by from 60 days to 45 to make the most of the boom. The U.S. luggage maker expects sales of the product in Asia to double from the previous year to $60 million this year.

The Chinese luxury brand market is worth roughly $19 billion a year, according to the U.S. consultancy Bain & Co. The sector has been hurt by Chinese President Xi Jinping's order in late 2012 that officials must curb lavish spending. This means the bump resulting from the TV show is the first bright news for the sector in some time. It also shows that huge business opportunities still exist in China.