SEOUL -- The SK Holdings group, South Korea's third-largest conglomerate, plans to lift spending on mergers and acquisitions as well as other strategic investments by 60% on the year to 4.9 trillion won ($4.32 billion) in 2017 with a focus on moving up the value chain in a changing business environment.

Total investment, including capital spending and equity-method investments, will rise around 20% to 17 trillion won -- in the neighborhood of a record. The group will spend more than 11 trillion won in South Korea in a single year for the first time, to upgrade production facilities, for instance. SK has highlighted the impact of such massive spending on job creation.

Amid an increasingly uncertain competitive landscape at home and abroad, Chairman Chey Tae-won stresses the importance of stepping up investment and job creation to not only secure an edge, but also give back to society.

A quick death awaits companies unable to adapt to the current business environment, Chey said at a group CEO seminar in October. SK must build a business structure that assures future growth, he said, encouraging structural reform through investment.

SK has indeed been pushing big acquisitions. It said in January that it decided to spend 620 billion won to acquire a 51% stake in LG Siltron, the sole South Korean player in the Japanese- and German-dominated silicon wafer business.

This followed SK's acquisition last year of OCI Materials, strong in nitrogen trifluoride -- a specialty gas essential for semiconductor production. More deals likely will be struck in fields related to chips, since the group is speeding up vertical integration of semiconductor operations.

Furthermore, oil-wholesaling and chemical unit SK Innovation has announced plans to buy Dow Chemical's ethylene acrylic acid business for $370 million. The material, whose applications include toothpaste tubes and food containers, is a stronghold of such Western companies as Dow and DuPont. Newcomers face daunting barriers to entry. 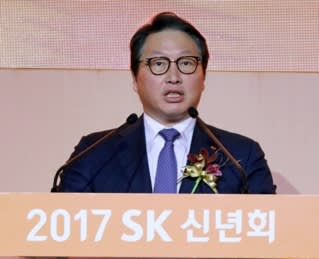 With its mainstay commodity-grade products up against intense Chinese competition, SK Innovation seeks to enhance its lineup of high-added-value products to broaden its customer base.

Meanwhile, Semiconductor manufacturer SK Hynix intends to bid on the memory chip business to be spun off by Toshiba. The Japanese company ranks second globally in NAND flash memory, which stores data in smartphones and other devices. The fifth-ranked SK Hynix seeks to better compete against market leader Samsung Electronics by acquiring the Toshiba operation.

Founded in 1953 by Choi Jong-kun, the SK group started out as a textile business. It then cultivated petrochemical and heavy industry operations by taking advantage of government ties. By asset value, the group has become the third-largest conglomerate in South Korea, after Samsung and Hyundai.

But SK is said to rely more on the domestic market than such rivals as Samsung. SK Innovation and cellular provider SK Telecom have achieved a strong presence so far. But they operate in areas where government regulations hold much sway. How to cultivate businesses less influenced by regulations, like semiconductors, is key, according to an observer.

The group is also taking on the challenge of developing businesses outside South Korea.

SK's overseas sales topped its domestic sales in 2013. Group sales now amount to 140 trillion won or so. Over the long term, the target is set at sales of 300 trillion won each in South Korea, China and elsewhere. "The three areas of semiconductors, resource development and chemicals are expected to serve as drivers of growth in our overseas operations going forward," an SK group official said.