Visitors look at displays at the Singapore Technology Engineering booth during the opening day of the Singapore Airshow on Feb. 16, 2016.   © Reuters
Business

As company marks 50th year, it is broadening focus to AI and smart tech

SINGAPORE -- The face of Ho Ching, the Singaporean Prime Minister's wife, lit up as she spotted her former comrades at the headquarters of state-owned defense company Singapore Technologies Engineering. Speaking at an event to mark the company's 50th anniversary, she greeted her ex-colleagues warmly. "In the early days, we developed and produced solutions for the Singapore Armed Forces without fanfare," she recalled. "You have come far. Never forget the importance of what you do." 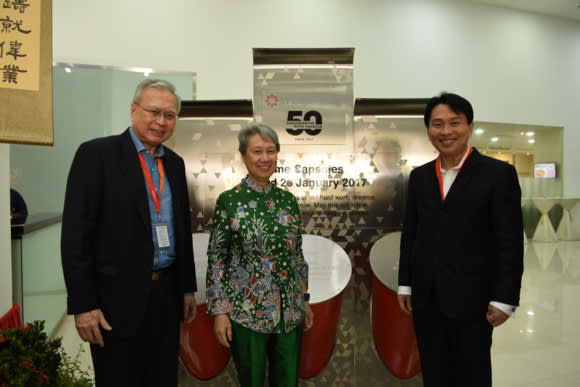 Ho, who holds a Master's degree in electrical engineering from Stanford University, has a special place in her heart for ST Engineering. Having started her career at the city-state's Ministry of Defence, she went on to work for Chartered Industries of Singapore (CIS), the first of ST Engineering's entities, formed in 1967. She took charge of the enlarged group in 1997 when the amalgamation of various defense and engineering-related companies gave birth to the current form of ST Engineering.

She may have believed her baby had grown into a resilient but low-key listed company. But it has been attracting unusually strong attention among investors ever since November, when Donald Trump won his surprise victory in the U.S. presidential election. ST Engineering's share price has risen about 6% since the election.

Brokerage DBS Vickers chose it as one of the "top 10 stock picks" for this year among Singapore-listed companies, pointing out that an expected increase in defense spending by the new U.S. administration will likely have a positive effect on the company's earnings. There are some tailwinds in its home region as well. With strong economic growth paired with domestic and regional political instabilities, Southeast Asian countries have increased defense spending by more than 80% between 1996 and 2015, according to the Stockholm International Peace Research Institute. The U.S. expanded its spending by 45% during the same period. Military products such as this 2007 TERREX Infantry Fighting Vehicle are still a core-competence technology field for ST Engineering.

On top of that, "there are signs from the Trump administration that it will continue to oppose China's assertiveness in the South China Sea, and this could be a driver for defense spending and military modernization in the region," said Jon Grevatt, Asia-Pacific defense industry analyst at IHS Jane's. "ST Engineering is bidding for a number of major U.S. military programs, and its export profile in the commercial market may make the company a strong contestant."

The group has evolved much since its inception. Today, it not only feeds the military demands for Singapore -- the city-state that spends around 20% of its annual budget on defense, with military spending per capita ranking in the top 10 globally -- but also exports military equipment to armed forces around the world.

"Although ST Engineering is not an all-round player in defense, they know the areas they want to penetrate, such as small and highly-advanced military vehicles, 40mm ammunitions, navigation and satellite systems, unmanned aerial vehicles and airframe repair and overhaul (MRO) services," said IHS Jane's Grevatt.

But Ho, who now leads state-owned investor Temasek Holdings, which holds a majority stake in ST Engineering, expressed larger goals for the company. "As we strive to deliver today for tomorrow, we must keep an eye on the longer term," Ho said, mentioning threats such as global warming. With financial growth stalling in recent years, the company must find new growth areas. Net profit for 2015 inched up by less than 1% compared to 2011, while revenue grew by 6%, partially due to high costs associated with the restructuring and downsizing of its underpeforming businesses such as some of aerospace businesses in Europe. "We are embarking on our next growth journey," said President and CEO Vincent Chong at the event in January. "We see great opportunities in smart city initiatives, public and cyber security, machine-to-machine communications, satellites communications as well as autonomous and robotics." The group showcased new products -- from autonomous vehicles and drones to train station turnstiles with facial-recognition systems.

This comes as Singapore, which itself turns 52 this year, is also struggling to find new avenues of economic growth. ST Engineering's footsteps have been in sync with Singapore's nation-building history: both have engaged in a relentless search for economic growth and the building of a robust military wall to protect the small nation from its much larger neighbors and regional powers.

ST Engineering has aligned its overall strategy with the country's "Total Defense" thinking -- a national principle that emerged after Singapore separated from Malaysia in 1965. It encourages every Singaporean's commitment to defense of the homeland, be it military, economic, social or psychological.

"We will defend ourselves. Whoever wants to defend us, I will say to them 'Thank you very much, but please remember I can defend myself and make no mistake about it'," the city-state's founding father Lee Kuan Yew declared in 1968, a year after CIS was formed to produce M16 rifles and 5.56mm ammunition.

The formation of various defense and engineering companies followed one after another, covering areas such as aerospace, ship-building and maintenance. They worked together with counterparts in Europe and the U.S., absorbed knowledge from them, and quickly built up technological capabilities. 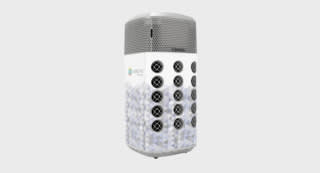 ST Engineering's expertise grown out of military equipment development is broadening the company's business scope, as seen with this “smart” air conditioning unit.

This made ST Engineering provider of a full suite of engineering products rarely seen in other defense-related companies, ranging from military vessels, vehicles and ammunition, to drones and wired fences. The expanded range of capabilities opened doors for civilian businesses, with revenues from civilian segments accounting for 64% of the company's total revenue in 2015, up from 54% in 2005.

For instance, it runs commercial airframe MRO facilities in Singapore, the U.S., China and Europe. Its background helped it excel in products such as railway operation systems that have been installed in Bangkok, Thailand, and security fences at Singapore's Changi Airport. 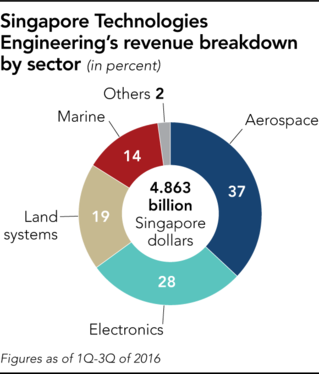 The injection of capital after its flotation in 1997 allowed the company to become active in international acquisitions. Since it set up U.S. headquarters in Virginia in 2002, it has acquired more than 10 companies in aerospace, specialty vehicles for construction, marine and satellite-based communications.

ST Engineering has been active following national emergencies and natural disasters. In 2003 during the outbreak of severe acute respiratory syndrome, it developed an infrared fever screening system named as TIME Magazine's coolest invention of that year. Its amphibious armored vehicles were used for search and rescue operations by the Thai army during the 2010 floods.

But rapid international expansion, along with the slower global economy, has caused some pain for the company.

In 2014, its bottom line declined year-on-year due to hefty costs incurred when scaling down its European aerospace operations. The company expects full-year pretax profit for 2016 to be lower than in 2015, as it took impairments for its Chinese construction vehicles joint venture. "We are feeling the slowdown in China," said CEO Chong last August.

While right-sizing its "commoditized" businesses, ST Engineering is eyeing new growth areas and making active investments. One of its new ventures is Innosparks, established in 2014 to apply engineering capabilities to create innovative solutions for daily lives. In 2015, it launched the "AIR+ Smart Mask", the world's first protective mask with a chargeable micro-ventilator fan.

The product was born from a call Ho received after a severe haze hit Singapore in 2013 due to forest fires in Indonesia. Ho recalls her friend saying: "Look, your ST folks did the thermal scanners so quickly during SARS. Can you get something done?" The AIR+ Smart Mask is equipped with a chargeable micro-ventilator fan to control humidity and temperature.

Some of the company's new business ventures are starting to bear fruit. It has installed an unmanned transportation bus in Singapore's Gardens by the Bay, a popular tourist destination. Its drones are used for marine surveillance on the shores of Singapore. One of its newest innovations is the facial-recognition railway gates, where a camera detects the passenger's face and automatically deducts fares from a linked account. The company hopes to introduce it to Singapore's metro stations in the future.

While there are signs that the market environment "has gotten tighter" for some of its commercial businesses related to the energy sector, such as offshore engineering, Grevatt expects the company will be able to leverage on the synergies between its defense and commercial businesses.

"As we build on these successes, we must always remember our core purpose -- to make a difference in the lives of our fellow citizens and our soldiers," said Ho. With its wide variety of expertise, the company certainly has fertile soil for cultivating these new businesses -- or in Chong's words, "our whole is stronger than the sum of our parts."