Distribution network gives it an edge over other heavyweights Indo Lotte Makmur, a 50-50 joint venture by the two conglomerates, will launch the iLotte online shopping platform as soon as July, putting $88 million into the project initially. The service will be geared primarily toward 20- and 30-something women and feature name-brand cosmetics sold in South Korea as well as other offerings from Lotte's existing online mall platform.

Drawing on a robust infrastructure built up over the course of years will let Salim achieve economies of scale for the e-commerce business, said Dani Sumarsono, chief financial officer of Indo Lotte and overseer of online operations at Indonesia's largest conglomerate. "E-commerce is not only about digital technology but about moving physical products," he said. "We have been investing in infrastructure for a long time." 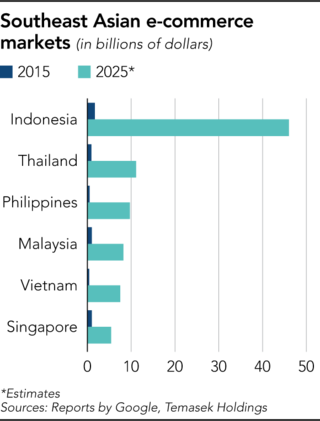 "Salim has a lot of infrastructure, we can bring the know-how and technology," said Philip Lee, a former executive at Lotte's e-commerce business in South Korea who was recently appointed as president of Indo Lotte.

The opening of Indo Lotte's Jakarta offices in December was attended by group CEO Anthoni Salim -- a sign that the internet business, with the Lotte collaboration at its center, is a new key pillar of growth field for his conglomerate.

Indonesia's e-commerce market is expected to grow to $46 billion in 2025 from just $1.7 billion a decade earlier, according to research by Google and Singapore's Temasek Holdings. Under this scenario, Indonesia would make up more than half of the total Southeast Asian e-commerce market and would follow China and India as the third-largest national market in Asia excluding Japan. A doubling of internet users, from 92 million to 215 million, is seen driving this expansion.

Harnessing this growth will not come cheap. At meetings by Indo Lotte's six directors every Friday, the challenge of logistics strategy is subject to intense debate. Overcoming both the chronic congestion of Indonesia's major cities and a lack of basic infrastructure on far-flung islands is a matter of life and death for an aspiring e-commerce business. Logistics costs in Indonesia come to 27% of gross domestic product, compared with 20% in Thailand and 13% in Malaysia, according to the World Bank.

But Salim's vast business and distribution network can give it an edge.  The group's 13,000-plus Indomaret convenience stores across the nation can be used as places to pay for and pick up goods ordered online. Meanwhile, a shipping unit that delivers instant noodles made by group member Indofood Sukses Makmur to more than 30,000 small towns nationwide can help bolster efficiency. Other efforts to link online and brick-and-mortar business are also under consideration.

Salim has also created a joint venture with Tokyo-based startup Liquid to explore payments using fingerprint authentication, aiming to present online shoppers with a variety of payment options in a society where cash remains king and credit card ownership is less one in every 10 adults. Liquid's system allowing preregistered shoppers to pay via fingerprint scanner has been deployed at Japanese convenience stores. The joint venture will test the system for 500,000 Salim employees initially and targets commercial application within the year.

Fellow Indonesian conglomerate Lippo Group is developing an electronic payment service for use on MatahariMall.com, which Lippo launched in 2015. Mitsui & Co. has since led a major round of investment in the site, which aims to distinguish itself by offering popular Japanese toys and appliances, for example.