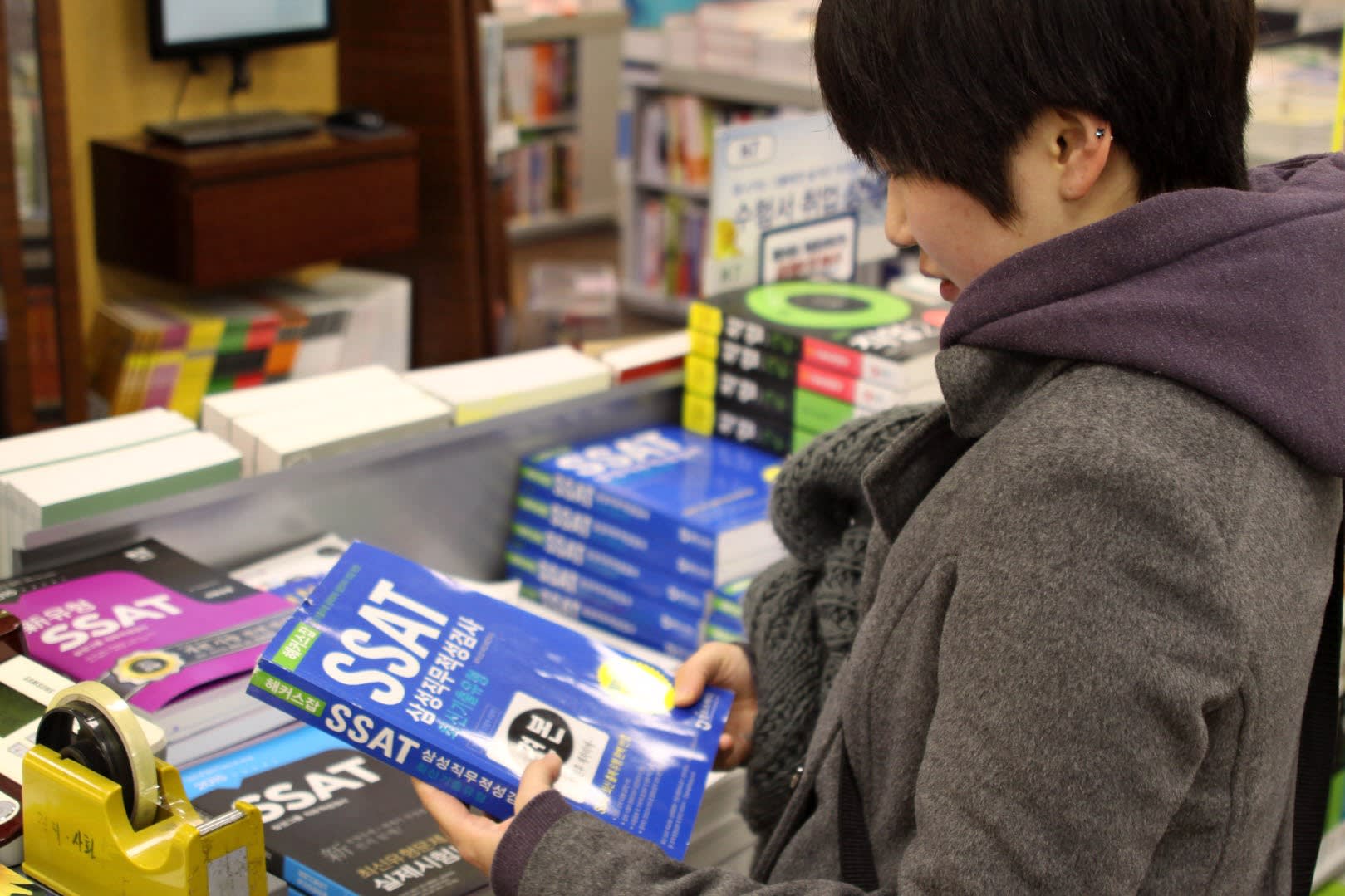 SEOUL -- Publishing guidebooks to help people land a job at the Samsung Group is becoming a lucrative business in South Korea.

In 2013, as many as 200,000 college graduates and graduates-to-be applied for Samsung's 9,000 employment offers. The number of applicants was almost triple from three years ago. The competition to enter South Korea's largest conglomerate and the most favored company among job seekers is so tough that applicants earnestly prepare themselves for the first hurdle in the recruitment process: the Samsung Aptitude Test (SSAT).

The Samsung Group hires the majority of its employees through a biannual process beginning in spring and autumn. Only those who pass the SSAT, a common paper test for the group, are eligible for interviews given by group companies such as Samsung Electronics and Samsung Life Insurance.

The group has not revealed the details of the SSAT. According to SSAT guidebooks, it runs for 130 minutes and test takers must answer 180 multiple choice questions that cover such categories as linguistic skills, mathematics, reasoning ability and knowledge of common sense.

For example, in the common sense category, the test presents an image of an SD card, a type of memory card, and asks respondents to pick the incorrect statement from four options: (1) SD is short for "Secure Digital"; (2) the card is appropriate for use in small devices such as mobile handsets; (3) with the lock function on the side engaged, data stored on the card can be read but not be modified; (4) SD cards are available in SD, mini SD and micro SD formats and each can be used in only particular devices with specified format. The correct answer is (4).

To tap into the growing market, a number of publishers are rushing into the SSAT textbook business. Some even provide online lectures on how to handle questions or attach discount coupons to textbooks for attendance at lectures on SSAT.

The president of a publisher that first issued a serious guidebook for the SSAT in Seoul said that such study guides are essential for applicants, because it is important for test takers to get used to answering not-so-difficult but numerous questions in a short time. An A4-size book from the publisher has roughly 750 pages and sells for 28,000 won ($26.7).

According to a young employee at Samsung Electronics, most applicants he knew had bought at least one, sometimes several, study guides prior to taking the test. He himself had bought one a month before the test.

However, in January, Samsung announced a decision that will immensely affect these publishers.

The conglomerate said that it intended to drastically change the recruitment process. Specifically, its plan is to reject some applicants on the basis of other elements that included review of submissions from applicants and whether an applicant has recommendations from a university president before the paper test process, because giving the test to all applicants is too costly.

Decrease in number of test takers may lead to reduced demand for study guides, which would be a huge blow to SSAT textbook publishers.

However, the controversial new recruitment system was effectively scrapped only roughly two weeks after the announcement due to a backlash from South Korean job seekers.

The company was criticized that such system might create a hierarchy among colleges, because it had allocated the quota of candidates that a university president can recommend based on such factors as university size.

However, an official at the Samsung Group said the company still believes that it needs to reform the hiring process and that it will keep discussing concrete measures.