Samsung Vietnam on Tuesday announced the arrangement with Vietnamobile and FPT Retail, a subsidiary of local information technology company FPT. Together, they will combine phones and high-speed connections in affordable packages aimed at rural markets dominated by Chinese players like Oppo, Xiaomi and Huawei.

The partners launched a trial run at FPT Retail stores in October, promoting a 12-month plan featuring a Samsung phone combined with access to Vietnamobile's third-generation, or 3G, network. This is a somewhat unusual approach in a country where the vast majority of consumers use prepaid services. 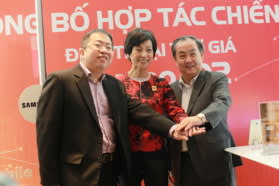 All three participants see a chance to boost sales by "socializing smartphones" -- in other words, making the gadgets more accessible to the masses.

The program will apply to 70% of the Samsung models sold in Vietnam, the prices of which range from $200 to more than $1,000. Customers will have to shell out as much as $350 less than usual, according to the announcement.

The initial deposit for a Samsung Galaxy Note 8 is set at 14.49 million dong ($636), 36% less than the phone's list price of 22.49 million dong, FPT Retail Deputy General Director Nguyen Viet Anh said at the launch event. He said users will then pay 888,000 dong a month for a year.

Subscribers will get 60 gigabytes of high-speed data a month, with up to 400 minutes of talk time on the same network and 6,000 minutes on different networks. They will be able to surf Facebook for free.

"This is the first such package cooperation, and we are the pioneers," the executive said. "We are also designing more suitable packages for smartphone users, costing only $50 to $70."

Samsung is the leading smartphone brand in Vietnam, accounting for about a third of a market valued at over $5 billion annually. During the first 10 months of 2017, Samsung racked up roughly 30% of the 11 million unit sales seen nationwide.

Yet, Samsung users are heavily concentrated in major cities like Hanoi and Ho Chi Minh City. The likes of Oppo, Xiaomi and Huawei have corralled the rural market, forcing the South Korean company to adjust its marketing strategies if it wants to bolster its presence.

And that is a priority, since Vietnam is Samsung's largest smartphone production base, with factories the northern provinces of Thai Nguyen and Bac Ninh. The plants assemble around 200 million smartphones a year for the global market, including the cutting-edge Galaxy devices.

"The most important target of Samsung is to maintain its leading position in the market, and Vietnam's rural areas will be our main targets in the [coming] years," Tran Tuan Thong, national sales manager for mobile equipment and telecommunications in Vietnam, told the Nikkei Asian Review.

Around 10 million feature phones are still sold in Vietnam each year, and Samsung's first goal is to convince these buyers to switch to its smartphones. Though the country has roughly 50 million smartphone users overall, there is still a lot of room for growth in rural areas.

Next year, Samsung plans to launch additional sales promotions aimed at rural areas, working with other major wireless providers like Viettel and Mobifone. In particular, it hopes to boost sales of entry-level models priced from about $130 to $220.

Long-term smartphone plans with low upfront fees are common in developed countries like the U.S., U.K. and Singapore. But in Vietnam, 95% of the roughly 130 million cellphone users are on prepaid plans. Samsung and its Vietnamese partners hope to win over more of them.

But past attempts by local players to subsidize phone purchases have failed, partly due to the difficulty of managing risk. With so many customers depending on the prepaid model, few have established payment track records.

To avoid falling into the same trap, FPT Retail has found a solution based on Samsung's technology, which enables the retailer to deal with users who fail to abide by their contract terms.