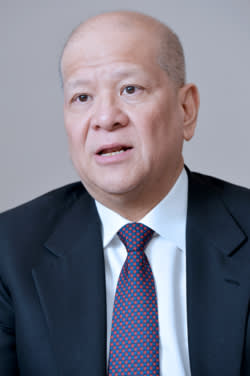 San Miguel is the Philippines' most diversified conglomerate. Recently, the giant company has undergone a strategic shift, moving into high-growth industries such as power generation and infrastructure, even as its core food, beverage and packaging operations continue to maintain their dominance in their respective fields. San Miguel's Vice Chairman, President and Chief Operating Officer Ramon S. Ang spoke to the Nikkei Asian Review about the current situation and prospects for his company.

Q: Why did San Miguel expand beyond its core food and beverage businesses?

A: I joined San Miguel in 1998, and I noticed there wasn't much growth. At that time, the old management was expanding the brewery. They did a lot of investment in China and Vietnam, but I noticed that the returns were quite small, so I proposed a diversification.

But if you remember, San Miguel was represented by government officials -- from SSS (Social Security System), GSIS (Government Service Insurance System), and some PCGG (Philippine Commission on Good Governance) directors -- so we were not able to do so.

Finally, in 2008, we were able to get the shareholders' approval to allow us to diversify, after showing them that revenues were flat. Income was flat and the company was not going anywhere. Also, the chances of the company declining had become stronger because we were an alcoholic beverage business and people were becoming health conscious. So we were able to get the approval of stockholders to diversify.

So in 2008, we saw the opportunity amid the subprime crisis, and prepared and sold some of our businesses.

Q: The expansion has been very aggressive. How did you manage to get into businesses in which you had no prior experience?

A: I think we were quite lucky to be able to catch some good deals. We were also bold enough to seize those opportunities, so I think if I look back I regret not taking some more.

A: The goal of San Miguel is to be able to help the Philippines build more infrastructure and provide a better place for our countrymen by having more roads, toll roads, trains and ports, and bigger and more efficient airports.

Q: With all these infrastructure projects, is San Miguel slowly abandoning food and beverage?

A: At the moment there is no plan to sell any of our businesses.

Q: But you need capital to fund these infrastructure projects.

A: I think if we ever need more capital, we can leverage some. Our leverage today is 2.5 times debt to EBITDA ratio; you can go to six times. We can take on investors -- you can easily get investors to buy some of your shares. This rendering shows the airport San Miguel hopes to develop on the east side of Manila Bay.

Q: After selling Philippine Airlines back to the Lucio Tan Group, what's next?

A: Actually, after selling PAL, the problem is negative carry. We have too much cash, and are not earning enough interest for the costs, so we are actively pursuing opportunities to invest in more infrastructure. We can probably build that $10 billion airport [which the company plans to develop on Manila Bay].

Q: What can we expect for next year?

A: San Miguel this year is expected to perform better financially. For next year, I hope San Miguel will win more projects. I hope the government will go all out in the bidding.

We will definitely participate in all this bidding to make sure the government gets the best deal.