Company in focus: San Miguel stays on the right side of Philippine politics 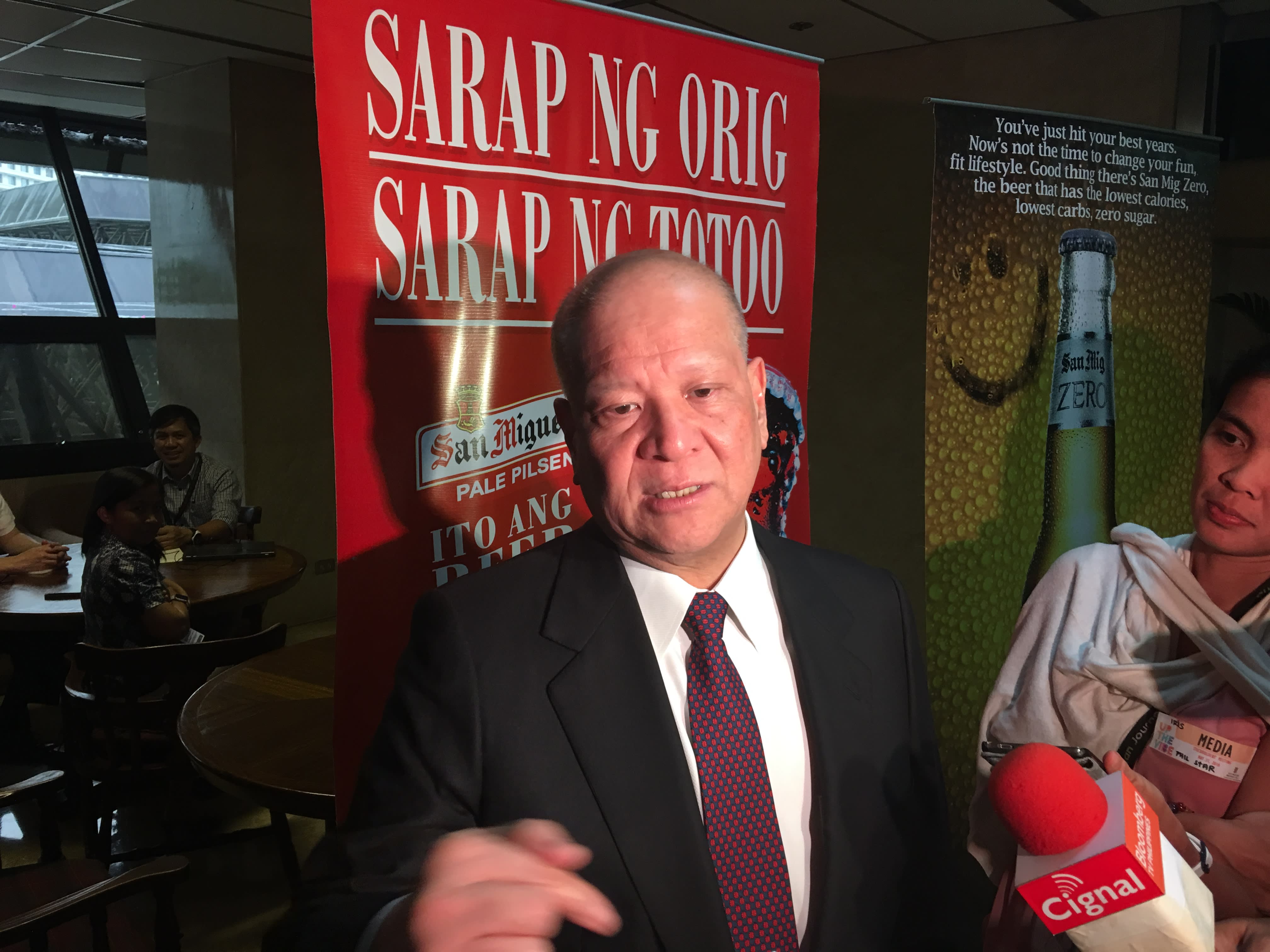 San Miguel President Ramon Ang speaks to reporters on May 31, the day after announcing his company will sell off its telecom business.
CLIFF VENZON, Nikkei staff writerJune 9, 2016 12:00 JST | Philippines
CopyCopied

MANILA   San Miguel is arguably the most audacious Philippine company. Once a food and beverage maker, in recent years it has been getting into industries in which it had no prior experience. Now, its expansion mode has shifted to better suit the economic priorities of the incoming government and the country's changing competitive environment.

On May 13, San Miguel President Ramon Ang told reporters the much-anticipated launch of his company's mobile broadband service was facing a delay. Nevertheless, Ang said, the service was still on track to break the duopoly enjoyed by Philippine Long Distance Telephone and Ayala Corp.-led Globe Telecom and to do so this year.

Weeks later, Ang would make an about-face. On May 30, San Miguel announced it will unload its telecom assets including the highly coveted 700 MHz spectrum housed under Vega Telecom, selling half to PLDT and and half to Globe. Its relatively dormant telecom business was priced at $1.5 billion, around a fifth of Globe's market value. 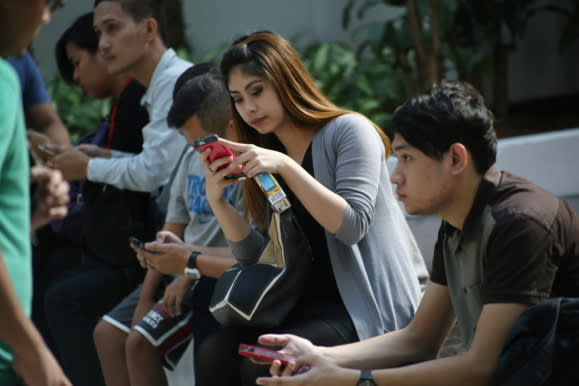 Many Filipinos were pinning their hopes on San Miguel to provide faster mobile Internet service, until the company dropped the plan on May 30 to focus on infrastructure projects.

Breaking into the telecommunications sector had been a pillar of San Miguel's diversification plan. In 2010, the company began bulking up on assets. The idea was to eventually challenge PLDT and Globe, two of the region's most profitable telecom companies by gross margin. In 2014, Ang said San Miguel was prepared to invest an initial $2 billion in the foray.

The businessman was confident that the roughly 300 billion peso ($6.52 billion) industry could accommodate a third player. "Our cellphones are barely working," Ang said in November, echoing widespread frustrations over the country's slow data speeds.

Ang's sudden and dramatic course change is not a total surprise. One sign came in March, when San Miguel terminated talks with Australia's Telstra to set up a telecom joint venture.

On May 17, Ang said his company will ramp up its investments and operations in Mindanao, the Philippines' southernmost main group of islands.

The announcement of a $1 billion-plus investment package for the region came after the May 9 election saw Davao Mayor Rodrigo Duterte become the country's first president-elect to hail from Mindanao.

Duterte assumes the presidency on June 30.

For a conglomerate that makes 87% of its sales from Luzon, the northernmost and most populous of the Philippines' three main groups of islands, and Visayas, the main group of islands in the central part of the country, the new southern investment plan marks a significant shift. Luzon, after all, is responsible for around 40% of the Philippines' gross domestic product.

In the presidential election, San Miguel's top executives initially placed big bets on Sen. Grace Poe, the most popular candidate until April. Poe promised to liberalize the economy and was said to have been the most business-friendly candidate. The Nationalist People's Coalition, a party founded by Eduardo Cojuangco, San Miguel's chairman and CEO, backed Poe. Ang, meanwhile, allowed Poe to use his personal aircraft during the campaign.

After Duterte's landslide victory last month, San Miguel's top two executives moved quickly to realign the company's political position and investment plan with Duterte's priorities. Duterte has been vocal about initiating a transition to a federal government that could help foster economic growth outside the capital, where much of the country's recent boom has been concentrated.

"We will make more jobs [in Mindanao]," Ang told reporters on May 17, two weeks before Duterte was officially proclaimed the winner of the election, on May 30.

San Miguel's decision to pull out of the mobile phone business, which also came on May 30, was spurred by Duterte's rise. The feisty president-elect has said he will open the Philippines' telecommunications sector to foreign players if the domestic telcos do not speed up internet connections. Duterte may also order regulators to parcel out San Miguel's prized 700 MHz spectrum, which is touted as solution to the slow internet speed problem.

By selling off Vega Telecom for $1.5 billion, San Miguel adds to a war chest that can be used to invest in the incoming president's home region.

The Philippines last year passed its first competition law, and the Philippine Competition Commission, an antitrust watchdog, is due to start work this year. The new competitive environment that these steps promise was seen as paving the way for San Miguel to enter the mobile phone market.

Yet these changes were never taken as a guarantee that the company would succeed in the country's already highly competitive telecommunications industry. 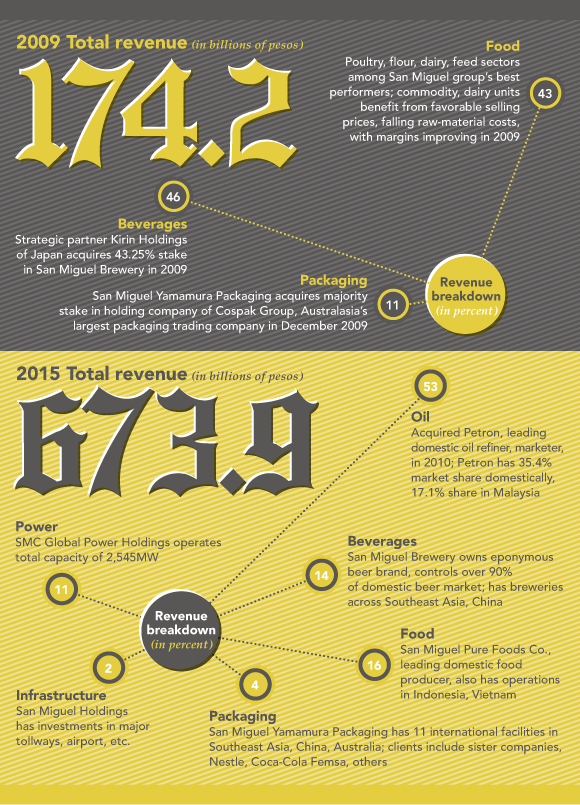 "By entering the telecom business, they [would] be competing with established players," said Lovell Sarreal, an analyst at Maybank ATR Kim Eng. "And looking at the experience of Digitel, it took a long time to become profitable."

Digital Telecommunications Philippines, or Digitel, was the telecom unit of Gokongwei-led JG Summit Holdings, which had a short-lived success as a third player before being sold to PLDT in 2011.

Ang said divesting the business was a "very, very hard decision for the company." He also described the decision to give up its telecom ambition as a "sacrifice." In reality, however, San Miguel may merely be picking its battles.

Outside the Philippines, San Miguel is best known for its eponymous beer. At home, it is the biggest corporate group by revenue, with exposure to an array of industries, thanks to an expansion plan Ang came up with in 2007 to counter slowing growth in the food and beverage sector.

San Miguel began by raising funds. Japan's Kirin Holdings helped with that by buying half of the brewery. Other food and beverage assets were also sold off. 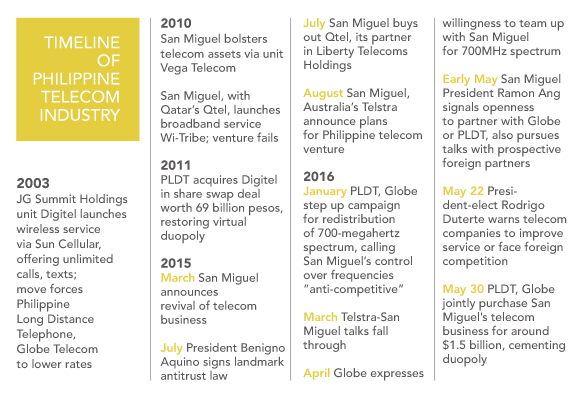 Ang also spearheaded San Miguel's push in infrastructure business in 2009. Now he is shaping the company into an infrastructure behemoth, with an expanding network of toll roads in the Philippines. It is currently building an 18 billion peso ($390 million) expressway connecting Manila's airport to a gaming hub near Manila Bay, as well as a 37.4 billion peso elevated highway linking the northern and southern outskirts of Metro Manila. In April, construction of a 69.3 billion peso railway in the northern outskirts of Manila began.

There are plans to pitch a $10 billion airport project to Duterte. The outgoing government of President Benigno Aquino received the same pitch but gave it the cold shoulder.

Ang said his diversified conglomerate will bid for all projects under the government's $20 billion-plus Public-Private Partnership program.

"The goal of San Miguel is to be able to help the Philippines build more infrastructure and provide a better place for the countrymen by having more roads, toll roads, trains, ports, and bigger and more efficient airports," Ang said in November 2014, on the sidelines of the Nikkei Global Management Forum in Tokyo.

The conglomerate's diversification saw a tipping point when it was hit hard by a fall in crude prices. In 2015, the group's consolidated sales dropped 13% to 673.9 billion pesos, while net income grew only slightly, to 29 billion pesos. Petron, which accounts for more than half of the conglomerate's sales, was significantly affected by the global oil glut.

However, the integration of a tollway business with a revenue of 13.3 billion pesos into San Miguel's books helped cushion the shock.

"We will focus on our core businesses, oil refinery, brewery, infrastructure ... ," Ang told reporters on May 31, the day after the company announced the sell-off of its telecom assets.

Going forward, San Miguel will be further betting on a sector that the government has vowed to support. The Duterte administration plans to keep the Public-Private Partnership program going, albeit with possible new rules. The incoming president also plans to boost infrastructure spending to 5% of the GDP from 3.5%.

Under Duterte's planned policies, Ang sees additional room for growth, especially in rural provinces. The GDP growth of Mindanao outpaced the country's 6.1% expansion in 2014, with the Davao region's 9.4% growth the fastest nationwide.

As of 2015, infrastructure made up 2% of San Miguel's total revenue but 9% of its operating income. With two additional tollways expected to be finished in the next three years, and one railway project in the next four years, infrastructure could provide San Miguel with a steady stream of earnings.

With a high reliance on its domestic business, San Miguel must ride with the political tides to stay afloat. Many Philippine companies have gotten behind Duterte's plan to disperse business outside current commercial centers, but none so much as San Miguel.

Still, San Miguel must also think ahead. Philippine presidents are limited to one six-year term. So in 2022, the company might have to redefine its audacity one more time.