TOKYO -- Character goods company Sanrio, owner of the Hello Kitty franchise, is broadening the scope of its licensing business to include deals with theme parks outside Japan. 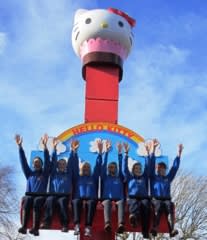 On May 18, the company's European subsidiary will open the first permanent Hello Kitty attraction in Europe.

Located inside Drusillas Park in the U.K. county of East Sussex, Hello Kitty Secret Garden will feature three rides and other Hello Kitty-themed attractions, as well as regular meet-and-greet events on weekends and school holidays.

Sanrio has begun aggressively licensing its character brands to theme parks in other countries to tap into new revenue sources. The focus is mainly on Asia, where Hello Kitty is widely popular. The company opened an indoor mini-theme-park in Malaysia in 2012, a larger indoor theme park in South Korea this January, and is planning to debut a huge outdoor theme park in China in the second half of this year.