TOKYO -- Sanrio is teaming up with Major League Baseball of the U.S. to bring MLB-themed Hello Kitty goods to Asia this fall. 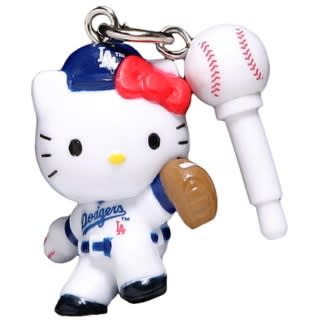 Sanrio plans to roll out official MLB key rings and other goods in Asian countries. Courtesy of the company

Merchandise such as pins, T-shirts and key rings featuring Hello Kitty wearing MLB team uniforms have been available at in-stadium outlets and other selected stores in the U.S. since spring. The company behind the world's most popular cat now plans to market these products in Japan, China, South Korea and Taiwan.

Official MLB-Sanrio goods will be marketed under a license agreement Sanrio executed in March between makers of official goods for all 30 MLB teams and Sanrio's local unit in San Francisco, California.

Sanrio hopes that the global popularity of American professional baseball will help it further expand business overseas. For its part, MLB hopes that collaborating with Hello Kitty will help it to appeal to consumers outside of the U.S., as the character is especially popular among women and children in Asia.

The collaborative goods are scheduled to go on sale in Japan in November, when MLB players will tour Japan for the All-Star Series 2014. The games between the MLB players and select Nippon Professional Baseball players will be the first in eight years. Sanrio is hoping the high-profile event will help to push up sales of MLB-related goods.

The goods will feature Hello Kitty wearing the uniform of the New York Yankees, the Los Angeles Dodgers and other teams popular in Japan.

In South Korea, Sanrio aims to launch Dodgers-themed Hello Kitty goods, as the team employs many Korean players. The company also aims to focus on goods related to teams that are popular in China and Taiwan for those markets.

Sanrio reckons that it will earn an operating profit of 8 billion yen ($77 million) in North America for the fiscal year ending in March 2015, down 8.1% from a year earlier.

To build up its licensing business in North America, the company plans to organize a number of events celebrating the 40th anniversary of Hello Kitty. The first will be Hello Kitty Con 2014, the first Hello Kitty fan convention in the world. The event will be presented in conjunction with major U.S. discount retailer Target at the Museum of Contemporary Art in Los Angeles, California, from Oct. 30 to Nov. 2. The company will sell goods produced jointly with Target as well as vintage items at the event.

The Japanese American National Museum in Los Angeles will also host an exhibition of Hello Kitty artwork and other programs, opening on Oct. 11 and on view through Apr. 26, 2015.