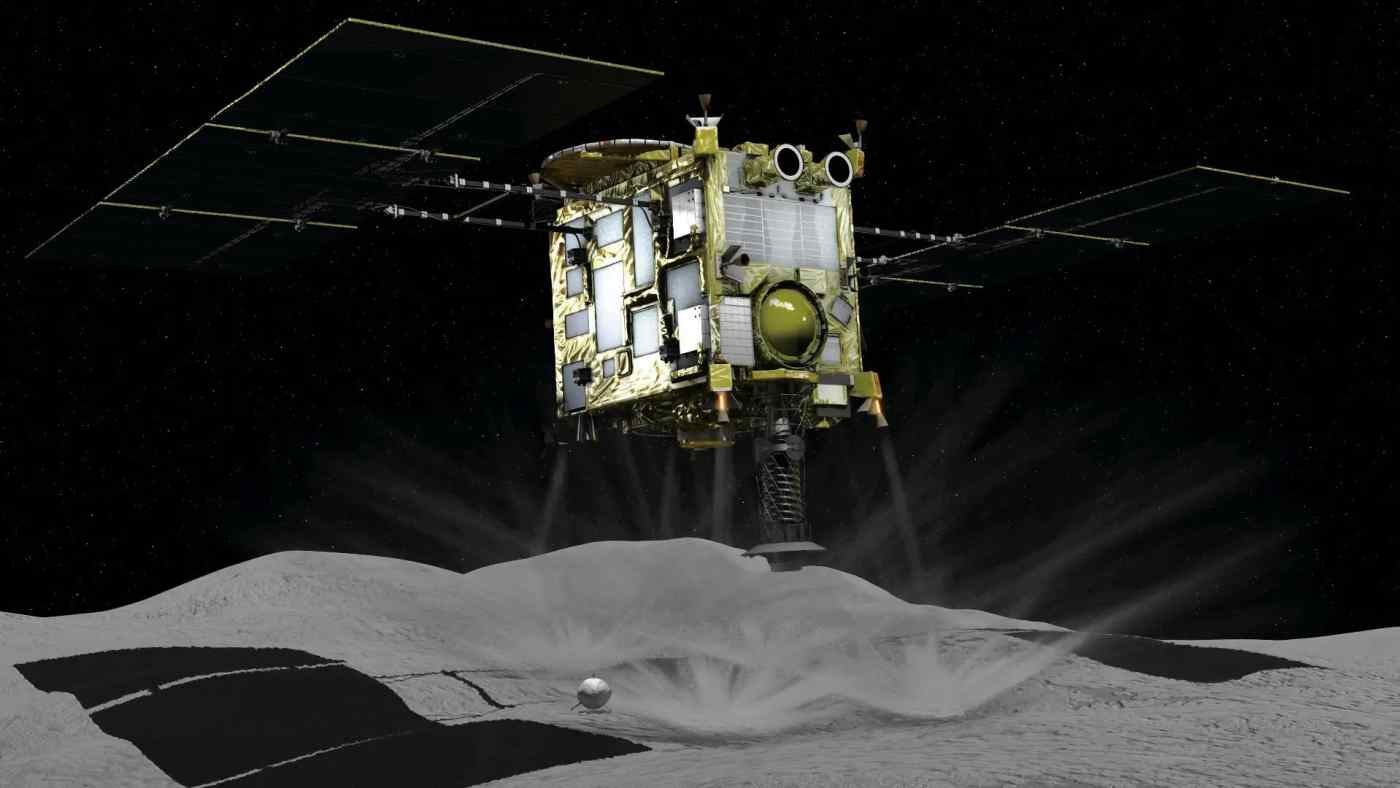 A computer graphic of the Hayabusa2 touching down on the Ryugu asteroid. Its rugged surface required the craft to hit a precise target for landing. (Image courtesy of JAXA via Reuters)
SHOJI KODAMA, Nikkei senior staff writer, and MASAMICHI HOSHI, Nikkei staff writerFebruary 28, 2019 05:15 JST | Japan
CopyCopied

TOKYO -- The Japan Aerospace Exploration Agency's pinpoint landing of an asteroid probe was a technical achievement made possible only by working with the private sector to keep up with better-funded counterparts in the U.S. and China.

The Hayabusa2 finished its 300-million-km journey this month by touching down on a patch with a radius of just 3 meters on the Ryugu asteroid, which is 800 times farther from Earth than the moon. The landing area was shrunk from 50 meters in radius due to the asteroid's rugged surface. It is not uncommon for lunar and Mars landings to be off by more than a kilometer.

JAXA teamed up with the American space agency NASA on asteroid exploration after the return of the trouble-plagued first Hayabusa probe. NASA is asking JAXA to share its know-how from the success of Hayabusa2.

Washington and Beijing are competing for the lead in space exploration. China in January became the first country to touch down on the far side of the moon, demonstrating its own technological achievements. It plans to land another lunar probe as early as this year and bring back rock samples.

The U.S. successfully landed another probe on Mars in November -- still the only country to do so. The planet's interior will be directly observed for the first time during the two-year mission.

Tokyo lags far behind Washington and Beijing in spending on space development. In the U.S., NASA alone has a budget of $20 billion. The total is estimated to swell beyond $40 billion when military-related expenditures are included. China does not reveal its space budget, but the figure is thought to be on par with the U.S.

JAXA's budget, by comparison, is about 180 billion yen ($1.63 billion). Adding defense-related spending still brings the total below 300 billion yen, less than a tenth of the U.S.

The Hayabusa2 cost 28.9 billion yen, an order of magnitude less than the typical cost of a planetary probe. The technology and know-how cultivated for this project on a strict budget is an important asset to Japan.

Nearly 300 private Japanese companies participated in the creation of Hayabusa2. JAXA oversaw the project, while information technology company NEC was in charge of development and manufacturing.

"We greatly improved its reliability to ensure there were no issues" this time, said an NEC employee who worked on development.

The first Hayabusa probe was a near-disaster. Its return to Earth was considered a miracle after it suffered numerous problems, including engine and communication breakdowns.

Hayabusa2 was built with its predecessor's shortcomings in mind. It is equipped with four rather than three reaction wheels, an essential part for stabilizing the craft that failed during the first mission. The ion engines gained 25% more thrust with an upgrade to the gas delivery system.

Chemical maker Nippon Koki worked on a device that uses explosives to form a small crater on Ryugu's surface. The company conducted numerous tests over three years of development to make the explosive's density uniform.

The device will be used in later phases of the mission. "Failure will not be tolerated," a Nippon Koki source said.

Private-sector technology will likely see broader use in space-related development. JAXA and Mitsubishi Heavy Industries aim to get the price of their H3 rocket, which is set to test-launch in 2020, down to half that the current H2A. The partners will use mass-produced components from cars and airplanes to achieve such competitive pricing.

Japanese lunar exploration startup Ispace said last week that Japan Airlines and Mitsui Sumitomo Insurance will participate in its launch plan starting in 2020. MSI will design insurance for commercial deliveries to the moon, while JAL will be in charge of assembling the lander through a subsidiary.

"The future space industry will be led by the private sector," said Ispace founder and CEO Takeshi Hakamada. "I want to expand the scope of the space business by cooperating on technology and services with large companies."