HONG KONG Asia is the world leader in liver cancer -- 80% of global cases occur on the continent, with 55% of new diagnoses appearing in China and Hong Kong alone. The disease is the most prevalent form of cancer in Laos, Mongolia, Taiwan and Thailand. "It's a huge problem in this part of the world," said Irene Ng, professor of pathology at the University of Hong Kong and a leading liver cancer expert. Fortunately, however, Asia is also a hotspot of research into the disease -- in part through Ng's own work.

The explanation for Asia's vulnerability to liver cancer is simple: Asian countries tend to have high rates of hepatitis B, a viral disease that causes inflammation of the liver. Carriers are 100 times more likely to develop liver cancer than noncarriers, while pregnant women can pass the virus to their babies during birth.

Infected infants develop a chronic, incurable infection that in later years causes cirrhosis of the liver, an irreversible condition in which damaged cells are replaced by hard scar tissue. Hepatitis C, caused by a different virus, is less prevalent, but also causes the cirrhosis that makes sufferers susceptible to cancer.

Liver cancer is extremely aggressive, often killing patients just a few weeks after diagnosis. It can be treated by surgery, but according to Ng, only a quarter of patients are suitable candidates. "The liver has two lobes, left and right. If the cancer is confined to one lobe, we can remove it," she said. "But if it has already spread to both, it's too late."

Recurrence rates are high. "If we don't remove every single cancer cell the first time, then it comes back, usually within two years," Ng said. Chemotherapy is commonly used but is often unsuccessful and exacts a terrible toll in terms of side effects.

In the future, cases of liver cancer will likely drop as hepatitis B vaccination programs are introduced across the region. Right now, though, new and effective treatments are vitally needed, and Ng is one of a number of scientists pioneering the development of novel therapies.

The cancer stem cells drive the growth and spread of cancer through the liver and into other parts of the body via metastasis -- the development of secondary malignant growths at a distance from the primary site of cancer. They also endow tumors with their formidable resistance to chemotherapy.

"To win the battle, our first challenge was to identify these officer cells," said Ng. Her team detected two unique proteins on the surface of liver cancer stem cells. "If a tumor sample contains a high quantity of these proteins, we can infer the patient has more cancer stem cells. Those patients fare worse -- with higher recurrence rates and lower survival rates."

Ng's team experimented with antibodies that target the surface proteins, bind to them and render them powerless. "We grafted tumors from liver cancer patients into mice to test this approach. The tumors reduced in size. We have not yet performed trials in humans, but it looks very promising."

Ng is also targeting the cancer's foot soldiers. "My goal is to identify strategic targets -- the molecules that give liver cancer cells their special abilities. With that information, pharmaceutical companies can develop the drugs to attack them."

KNOWING SOONER Liver cancer is often diagnosed late because symptoms, including abdominal swelling and weight loss, become obvious only when it has progressed significantly. With earlier diagnosis, more patients would survive. Rossa Chiu, Croucher fellow and professor of chemical pathology at the Chinese University of Hong Kong (Courtesy of Croucher Foundation)

Rossa Chiu, Croucher fellow and professor of chemical pathology at the Chinese University of Hong Kong, has worked out how to detect cancer of the liver, and other organs, at an early stage. "I work on plasma, the fluid portion of the blood. As cancer develops, cell death increases. The dead cells break open and dump their DNA into the plasma," she said.

Chiu takes a blood sample, extracts the plasma, isolates floating strands of DNA and looks for the mutations associated with tumors.

If she finds abnormal DNA, the next task is to pinpoint the source. "My team developed a brand-new technology that analyzes a biomarker called DNA methylation. Different tissues are associated with different DNA methylation, so we can identify which organ produced the mutated DNA."

Chiu's tests on patients have generated useful results. "After surgery, the plasma DNA should normalize. If it does, the patient receives the all clear. If it doesn't, that indicates that the cancer has metastasized elsewhere in the body."

Chiu hopes the diagnostic test will eventually be incorporated into routine health checks. The cost of sequencing, a key part of the process which identifies the genetic information carried by segments of DNA, is falling fast. "By the time I've done large-scale trials and fine-tuned the sensitivity, it may be affordable," Chiu said.

BACTERIAL WEAPONS On another front, two teams at the University of Hong Kong are deploying bacteria in the battle against liver cancer.

Professor Huang Jiandong, at the School of Biomedical Sciences, tweaked the genome of the salmonella food poisoning bacteria to transform it into a cancer-fighting weapon. Modified to thrive in anaerobic environments -- those lacking free oxygen -- the bacteria proliferate in cancer tumors, where oxygen is low, but die in healthy tissues, where oxygen is high.

Huang tested the modified salmonella on mice: Tumors shrank in 90% of cases and disappeared completely in 25%. "We know it works, but we're not sure how," Huang said. "The bacteria might attack the cancer cells, or compete with them for nutrients. Or they might trigger an immune response -- one that is designed to fight salmonella, but which also kills cancer cells."

Huang said he was experimenting with further adaptations that will enable the salmonella to carry therapeutic agents to the tumors like a "guided missile." He added: "We've seen no unintended consequences in mouse studies, but we must ensure it's safe before we start human trials."

His next tests will be with dogs, which often develop liver and other types of cancers as they grow old. He is already working with veterinarians to identify suitable canine patients, pending regulatory approval. "We know there's a big demand," he said. "Many dog owners have asked me to treat their sick pets." 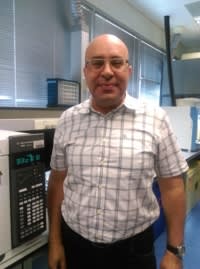 Hani El-Nezami, a researcher at the University of Hong Kong's School of Biological Sciences (Photo by Sarah Lazarus)

At the university's School of Biological Sciences, Hani El-Nezami and Gianni Panagiotou have created Prohep, a probiotic cocktail of bacteria and yeasts that could help prevent, as well as cure, liver cancer. "Probiotics are effective against colorectal cancer, but this is the first time they have been used successfully to treat cancer outside the intestine," El-Nezami said.

To concoct their recipe, El-Nezami and Panagiotou combed the scientific literature, looking for individual strains of bacteria that had demonstrated a positive impact on gut health and liver disease. They tested the best candidates and selected nine strains. In mouse trials, Prohep reduced the size and weight of tumors by 40%. The treatment was more effective when mice were fed Prohep before being inoculated with the tumor.

El-Nezami said Prohep's primary therapeutic effect is to inhibit angiogenesis -- the process by which new blood vessels are generated. Liver cancer tumors are highly vascularized, and reducing blood flow starves them of oxygen and nutrients. "We don't yet understand the mechanism. We know the bacteria produce metabolites in the gut, which 'talk' to the body's immune system. In this case, they sent the message to stop angiogenesis."

According to El-Nezami, it should be relatively easy to commercialize Prohep because "the strains we use are already classified as safe." He hopes that used either in tandem with chemotherapy or as a substitute, it will offer liver cancer patients an alternative to surgery that is both affordable and free of debilitating side effects.